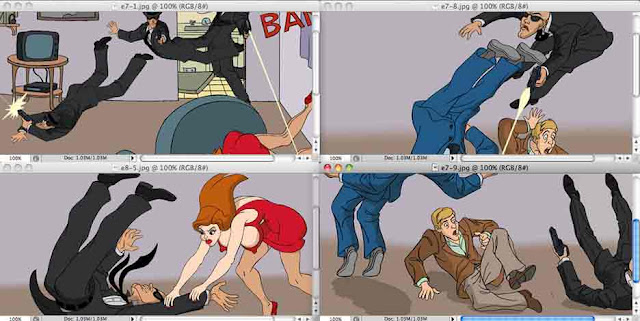 WHAT MADE JOHNATHAN WINTERS SO GREAT?


I'm not sure. Maybe it had something to do with Winters being mischievous.  People like that quality. Maybe that's why mischievous people make good joke tellers. They make you aware of the absurdity of the fact that you just dropped something important to listen to something that's going to be incredibly stupid.

I don't remember many jokes, and I'm not really good at telling them. What I do remember is the way they were told. I love the way joke tellers look both ways then grab your arm and lean in furtively. I love the whole ritual that's associated with joke telling. Mischievous people are experts at creating the atmosphere that precedes a joke.

All three of these YouTube videos are of Jonathan Winters, from the period when he first started to do improv on TV.

He was far and away the greatest hero of my childhood. Unfortunately he was only on late at night when I wasn't allowed to watch.  To see him I had to wait til my folks went to sleep, then sneak downstairs in the dark, taking care to avoid creaking floorboards and barking pets.  I'd feel around for the TV controls in the dark, then with infinite patience slowly turn on the set, with the brightness and sound almost as low as they could be.

The films you see here include some of the very same sketches that I watched in the dark. I never saw them with this clarity, though. The screen was always so black that I could barely make out the shapes as human, and I had to press my ear hard against the speaker to hear what was happening. My grandfather was a light sleeper and more than once he caught me and terrible yelling ensued.  Then there were the ghosts, but I won't go into that.


I guess you appreciate what you have to make sacrifices for. All these videos have great meaning for me.
I read somewhere that the young Bach had to do something similar in order to get access to his dad's music library. His father was certain that his oldest son would be the musically gifted one, and didn't want Bach, the little kid, to get a taste for something that was so obviously beyond his meagre ability.
Posted by Eddie Fitzgerald at 12:55 AM 12 comments

HAVE YOU HEARD OF THE "DANDIZETTE?"


Posted by Eddie Fitzgerald at 1:34 AM 21 comments

2 Avoid prologues: they can be annoying, especially a prologue ­following an introduction that comes after a foreword. But these are ordinarily found in non-fiction. A prologue in a novel is backstory, and you can drop it in anywhere you want. There is a prologue in John Steinbeck's Sweet Thursday, but it's OK because a character in the book makes the point of what my rules are all about. He says: "I like a lot of talk in a book and I don't like to have nobody tell me what the guy that's talking looks like. I want to figure out what he looks like from the way he talks."
3 Never use a verb other than "said" to carry dialogue. The line of dialogue belongs to the character; the verb is the writer sticking his nose in. But "said" is far less intrusive than "grumbled", "gasped", "cautioned", "lied". I once noticed Mary McCarthy ending a line of dialogue with "she asseverated" and had to stop reading and go to the dictionary.
4 Never use an adverb to modify the verb "said" . . . he admonished gravely. To use an adverb this way (or almost any way) is a mortal sin. The writer is now exposing himself in earnest, using a word that distracts and can interrupt the rhythm of the exchange. I have a character in one of my books tell how she used to write historical romances "full of rape and adverbs".
5 Keep your exclamation points under control. You are allowed no more than two or three per 100,000 words of prose. If you have the knack of playing with exclaimers the way Tom Wolfe does, you can throw them in by the handful.
6 Never use the words "suddenly" or "all hell broke loose". This rule doesn't require an explanation. I have noticed that writers who use "suddenly" tend to exercise less control in the application of exclamation points.
7 Use regional dialect, patois, sparingly. Once you start spelling words in dialogue phonetically and loading the page with apos­trophes, you won't be able to stop. Notice the way Annie Proulx captures the flavour of Wyoming voices in her book of short stories Close Range.
8 Avoid detailed descriptions of characters, which Steinbeck covered. In Ernest Hemingway's "Hills Like White Elephants", what do the "American and the girl with him" look like? "She had taken off her hat and put it on the table." That's the only reference to a physical description in the story.
9 Don't go into great detail describing places and things, unless you're Margaret Atwood and can paint scenes with language. You don't want descriptions that bring the action, the flow of the story, to a standstill.
10 Try to leave out the part that readers tend to skip. Think of what you skip reading a novel: thick paragraphs of prose you can see have too many words in them.
My most important rule is one that sums up the 10: if it sounds like writing, I rewrite it.


BTW: I added something important to the Bette Davis post immediately below, to the part about Mankiewicz. Take a look!

Posted by Eddie Fitzgerald at 1:07 AM 27 comments