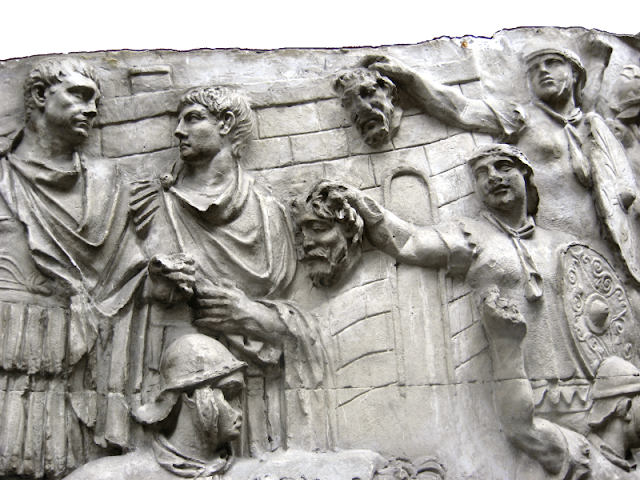 As you can see from the sculptures carved into Trajan's Column (above), the Romans were not always nice guys....

...but they were superb letterers. That's (above) the lettering at the bottom of the column. Thick and thin, serifs...wow, the Romans knew all about things like that. I assume the absence of space between the words is decorative and formal, and not the way writing was usually done (Stephen disagrees... read his correction in the comments). 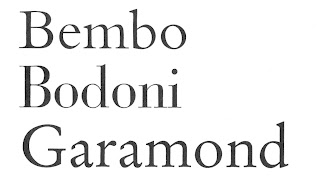 Amazingly the Roman fonts are still with us, not only in the ubiquitous Times New Roman, but in in a host of adaptations like the ones above.

One of the most interesting of all modern fonts is Helvetica. It began life in Switzerland in 1957, in fact the name is a Latin form of the word Switzerland. It's the Calvin Kline of fonts, something that's simultaneously simple, elegant and avant garde.

My book on the subject, "Just My Type," says: "The font manages to convey honesty and invite trust, while its quirks distinguish it from anything that suggests overbearing authority; even in corporate use it maintains a friendly hominess." 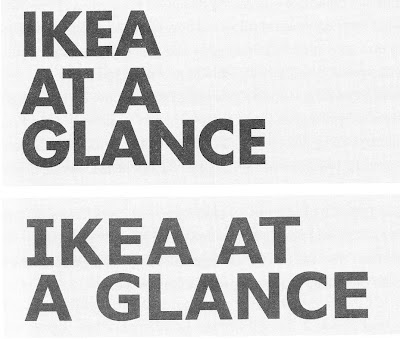 Here's (above, top) my other favorite font, Futura. It's controversial because it only seems to work for capitalized titles. Whole paragraphs of it seem a little harsh. If I have the story right, somebody decided to make a version of it that favored paragraphs, and that's how Verdana (above, bottom) came to be. The problem is that Verdana only looks good in paragraphs. Verdana titles are lackluster and anal retentive. What a dilemma!
Stupid me, I would use Futura for the headlines and Verdana for the prose, but for some strange reason a lot of people don't want to do that. Forced to make a choice, most moderns prefer Verdana, so now Futura is on the endangered fonts list.
Ikea recently made the headlines when it switched it's official title to Verdana. Protesters picketed, talk of boycott was in the air. ...it was reminiscent of the public outcry when Classic Coke was taken off the shelves.
Interesting, huh?
Posted by Eddie Fitzgerald at 2:16 AM

Hi Eddie, have you seen Leslie Cabarga's book on The Art & Design of F.G. Cooper? He was a cartoonist, working for Life and others, who produced beautiful hand lettering. He had that deep knowledge of classical letter forms, and was able to translate them into something more caricatured.

Holy cow! I thought you were being hyperbolic about the Ikea font controversy but nope, all knowing Google confirms it.
The uncultured me wonders why people would get so upset over something as trite as a font?

The story of the New Coke controversy is an interesting one too.

Never used the Futura font or even heard of it, but I've definitely seen it before on lots of advertising.

Speaking of Latin fonts, have you ever watched I Claudivus? My Latin teacher has been showing it everyday in class and I find it really interesting, though I haven't watched much of it to really establish a firm opinion on it.

Both Greek and Latin were written without spaces between the letters, though in Latin you will often see dots between the words (higher up than a period). The use of spacing as punctuation was introduced by monks in the Middle Ages. To make matters more confusing, ancient Greek inscriptions and manuscripts use a technique called "boustrephedon", which means "ox-turning". The term comes from comparing writing to the way you plow your field: going down one row, then turning back the other way, and so on. In Greek writing, line 1 would be written left to right, line 2 would go from right to left (and the letters would be reversed), line 3 would switch back to left to right, etc. Between that and the absence of spaces between the words, you can see why so much scholarship is needed to make sure translations are exact!

I'm a big fan of sanserif fonts. Whenever I type something for a design project I try to use them whenever I could (unless a serif-font fits the mold better).

I like Century Gothic font. Has a nice style to it, although the letters can be too wide at times. Narrower fonts like Arial Narrow are also pretty useful as well.

Occasionally I like to use the typewriter fonts for added effect. Is there an actual name for a default font that many old typewriters used?

Kellie: Many thanks for the link! I made a note to myself to find the book and take a look at it!

Joshua: i'm surprised to hear you say that. Fonts are important. They define a company or a product to the public. When Ikea changed from avant garde Futura to nothing special Verdana, that told the public something important about the path that company was on.

Roberto: I Claudius was great!

Stephen: Wow! Thanks for the correction! I noted it in the article!

I agree. IKEA made the wrong choice. Verdana is not as stylistically consistent. Positive and negative spaces are unbalanced. Look at that G! That G is going to change radically as it scales.

It's not a terrible font for reading copy but for headlines in print or online or for signage it's inferior to Futura. A change for the worst, definitely.

My guess is some myopic executives wanted serifs on the 'I' and didn't care about anything else, a stupid decision, and perhaps a sign that the convicts over at Ikea HQ are running the jail.

Font choices aren't trite when you're one of the biggest companies in the world and one that has to maintain the appearance of being run by elite designers generous enough to build things for the unwashed masses. If they can't keep up that facade people are just going to buy their furniture at Target or Wal-Mart.

Before I started doing animation classes, I did design classes and one of the first things that you get really absorbed in is typography. You quickly memorize the phrase "the quick brown fox jumps over the lazy dog" (as every letter in the alphabet is used in the sentence).

Futura is easily one of my favorites fonts but I think it works in both capital and lower-case. Another lovely sans-serif font is Century Gothic, it always reminds me of those wonderful Blue Note album covers.

I had a short love for Helvetica, but it's used too frequently. When you have a plethora of fonts to choose from and you only see Helvetica it's safe to associate it with laziness, try your best to avoid using it.

My friend has this AMAZING book of typefaces, and all of them are blackletter fonts (http://www.amazon.com/Fraktur-Mon-Amour-Judith-Schalansky/dp/156898801X). Looking through it is always a delight.

Eddie, did you know that all of those ancient, white marble sculptures were originally painted in vivid, even garish colors? Imagine that fresco with lots of bright yellow, blue, and gory red. It certainly gives one a different impression of those times. Here are some reproductions:
http://listverse.com/2007/12/24/top-10-color-classical-reproductions/

Brubaker, Alberto: Two fans of Century Gothic!!!! I'll have to look that up!

Alberto: Thanks for the tip! I linked to Amazon but the look inside feature didn't contain many pictures. I'll see if I can thumb through it in a bookstore.

Kelly: Aaaaargh! How depressing!!!!! The coloring on those statues is HORRIBLE!