PICTURES THAT INFLUENCED ME #1A 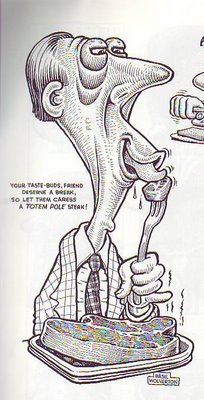 Three of these are pictures I saw in Mad Magazine when I was a little kid. One I discovered a little later, I don't remember how. I loved them when I was a kid and they continue to influence me even today.

What impressed me about the drawing on top (above) was the idea that you could do a drawing in the wonderfully ignorant, over-the-top style of the class clown but still project delicacy and restraint. This isn't a shout-at-you, Big Daddy Roth picture. The restraint actually makes it funnier than than Roth. I always meant to ask John K if this picture influenced him because John's caricature style can be described this way.

My school friends and I used to crack up over the galoot and the elbow (above). I KNEW guys like this, guys who aren't bullies, but who step on little people because they don't seem to be aware of their existence. When you're this big only other big people are on your radar. And look how eager and stupid the guy is!

This (above) is the picture that made me aware that cartooning is often about worlds in collision. Two men with totally different personalities are forced to sit so close that they interfere with each other. The pictures are funny even without the beard-in-the-soup gag. They made me aware of rhythm, framing, and funny staging. They also reminded me of the centrality of funny drawing. I stared at this a lot before the teacher confiscated the magazine.

The panel on the left (above) is the one that really captured my imagination. I thought the disgusted guy in the middle had such a funny face that I was driven to spend countless hours mugging infront of the mirror, trying to learn it. Now I've gotten really good at it.
I love to draw this kind of guy, A character who reacts with disdain and disgust to people around him.
Posted by Eddie Fitzgerald at 1:45 AM

Very good stuff. My equivalent is a later(?) one from MAD Magazine, about an invention: TV trays with earpieces so that the food could be shoveled directly into the mouth from the tray, without taking your eyes off the TV.

My Dad was always waxing rhapsodic about Basil Wolverton and his creations. He insists there was even a Wolverton character balloon (Space Man?) in the Macy's Thanksgiving Day Parade at one point.

There's some great Powerhouse Pepper stuff over at the animationarchive.org site right now.

My own personal introduction to Wolverton came as the result of DC's mid-seventies PLOP comic book. I tried drawing like that, too. Every friggin' pore on the characters' epidermis seems to be on display.

Isn't it amazing that BW also did "serious" sci-fi and apocalyptic relious stuff as well?

Thanks, as always, for sharing!

Eddie
These drawings remind me of a story. A few years ago I met a girl at work, and when she found out that I was a cartoonist she got really excited, and asked me what I thought about Basil Wolverton.

I told her that I loved his work, and then proceeded to explain why. She got then got REALLY excited, and told me that he was her grandfather! How cool is that I thought as I pressed her for information.

Now fast forward a few weeks to a party that her and her husband where having. She breaks out a book full of his religious artwork. Again I began to gush about why I liked his work so much.

One thing that I think all artist tend to do is to express themselves in a somewhat colorful, and over the top kind of way. While I was talking about the detailed rendering in his artwork, I said something along the lines of…

“What’s so great about his artwork, is that he’s not only great at identifying and then exaggerating the gruesome truth about us humans, but he also puts in the time and effort to do the kind of rendering that makes it all that much more tangible…

Nobody does that kind of stuff today; doing all of that detailed Stipple Shading would give you a stroke!”

I was completely confused as her excited, proud, giddy expression suddenly shifted into a look of horror, with maybe at best, a slight bit of bemusement...

“WHAT?” I said, feeling the eyes of family members upon me...

And that is my story.

Thanks for listening,
James.

of course Basil was a huge influence on me. That's where the gross close up paintings came from in Ren and Stimpy.

I hope you are feeling better and can eat a pizza with me on Friday and concoct more theories and blog subjects.

This looks like the underground comic style via Robert Crumb stle..

John K.. I figured those R&S closeups were influenced from the old Tom & Jerry's.

Wow! John, Stephen and Eddie are all talking about Basil on their sites! I feel like a whole nother world has opend up ! i'm gonna check this guy out some more.

PS Anyone heard of Kaz? His style looks influenced by this!

Basil Wolverton is one of my all time favorite cartoonists! He influences a lot of my art.

There's a great book that everyone should buy called Wolvertoons: The Art of Basil Wolverton. It's by Fantagraphics Books, and it's great! Lots of funny characters in that book! His comics Powerhouse Pepper are really funny too!

John K told me he loves Basil Wolverton's art too. When I met John, we had a whole discussion about Wolverton, and we both think Ed Roth and a lot of other artists from the 60's were influenced by that stuff. Though I'm also a huge Ed Roth fan, I like Wolverton's style much much more.

John: I found a xerox of a Basil-type picture you did, peobably when you were at Filmation! I'll post it soon! Pizza? Sounds Great!

My exposure to Wolverton was both in Mad, and in my highschool days there were the Ugly Stickers. I still have a complete set that I collected at that time. Many lockers were decorated with them, and I even remember in the Biology class the snakes were named Napoleon and Josephine and someone had put the Ugly Stickers with those names on them on the glass tank they were kept in. His characters were mind-bendingly bizarre, and unforgettable. I also remember the rubber finger monsters you could get at toy shops, and the designs were clearly based on the Ugly Stickers (probably rip-offs, unless he actually gave permission, but they were badly made so I rather doubt it)-- now and then you still see lame versions of those finger monsters... Wolverton was one of a kind, and I treasure the couple of books of his work I got from Bud Plant (now out of print)...

As for me as a lifelong amateur (and relatively untrained) cartoonist,
caricaturist and inveterate doodler, Basil Wolverton's work as an influence first came about through his "Powerhouse Pepper" comic book feature back in the mid-1940's. It carried me through my days as an upaid editoirial cartoonist for the Universiity of Delaware's weekly student newspaper,"The Review", during the early to mid-1950's, but reached its apogee with Al Capp's "Li'l Abner" Sunday newspaper comics page in 1964. Capp ran a contest in which readers and fans were invited to submit a sketch of the face of an up-to-then faceless character he had introduced into the strip earlier that year. My sketch was later published in the strip, along with a credit, actually came in in second place and showed a definite influence of the almost-inimitable "Lena the Hyena" style.