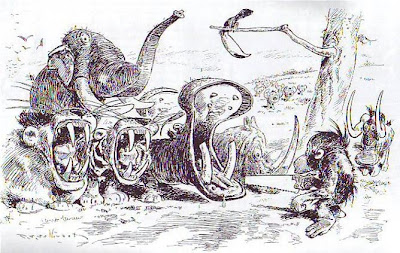 T. S. Sullivant fans should be in heaven now because John K wrote something about Sullivant at the same I started this. If you haven't read it then run, don't walk, over to John's blog "All Kinds of Stuff' and read the entry, "Being Enslaved" which is a brilliant argument for originality in character design, exemplified by Sullivant. I'm incredibly busy today so my own Sullivant entry is much more modest. I simply note my own discovery that he did some of his best work when he was in his 60's. Imagine that! The picture above was done in 1921 when he was 67 years old! For comparison, Vlaminck petered out when he was 30. Boy, you never know when the axe is going to fall! 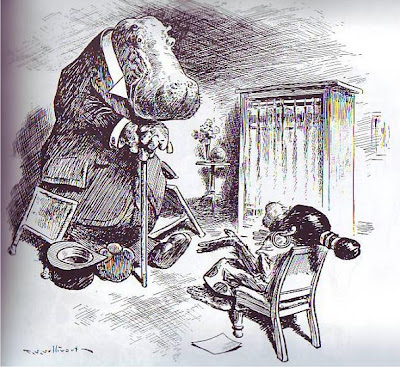 Jim Woodring, who wrote the article I'm referencing (The Comics Journal, special edition, winter 2002), says he's seen some of the originals and they appear to have been chipped and scraped with a knife in an effort to make the lines look scratchy. Fascinating! My dad was an amateur pen and ink artist and he was always scraping his pictures with a razor blade. More than once he told me that half the work on a picture is done after it's drawn. I wonder if he picked that up from Sullivant?

Posted by Eddie Fitzgerald at 12:48 AM

It's in your blood to be an artist? Do you have any of your father's pictures?

It was in my blood as well to be an artist. My Dad and his Dad before then were artists as well as many of my cousins from my Dad's side of the family. Unfortunately I never got to see their stuff. But it's good to know that you can still do your best stuff so late in your age.

Time to make some new drawings for myself other than what I work for a living. That is if I can get my ass off from playing my Nintedo Wii everytime I get home.

Yeah I just played Wii tennis yesterday for the first time, and was thanking myself over and over for not buying a Wii when they came out. You're not kiddin'. I don't think I'd ever do anything else but look like a doof in my living room for hours on end.

My dad's dad did cartoony sketches all the time, really damn good ones too. My mother has dabbled in a number of mediums throughout the years, and taught art for a while.

A friend tells me it's common sentiment from mathemeticians that everyone reaches their creative peak at 23 and it's a slow decline from there. If so, I better hurry, beacuse I only have a year and a half to go before I start getting old!

I think that's bullshit. Look at John and you! It's just a matter of exercise. Kubrick finished the final cut of Eyes Wide Shut(his considered final masterwork) four days before his death at 73! Like everything else in nature, one must always renew oneself to stay strong and smart.

Mathematicians contribute their work to the scholarly world earlier than in the other sciences (such as physics or biology), but they also die earlier on average as well.

I saw Ms. Potter recently and this art reminds me of that. When did anthropomorphic animals start appearing like this? Like humans? I know in the Eastern is goes pretty far back.

Herriman violated the paper with a razor blade, too. Original KRAZY KAT strips are all pitted and scarred.

It's a weird concept to cartoonists who work primarily in animation - where that particular technique obviously wouldn't apply - but it was common in print cartooning in the '20's and '30's, apparently.

Maybe that's why Sullivant and Herriman suffer from reproduction more than any other artists. I never cared for KRAZY KAT until I saw some original Sunday pages in a museum in New York. They're incredibly beautiful up close and in person. They lose a lot after they're printed.

I've never seen a Sullivant original - they're incredibly rare - but I'll bet they'd knock your eyes out. He influenced everybody.

Kali: I do have some pictures of my Dad but I could never bring myself to print them. During the years of my teenage rebellion I snubbed him relentlessly and I think it really hurt him. The guilt still makes me loose sleep. Seeing his picture in print would make me feel awful.

Mike: Right, Herriman. I forgot that. Kurtzman also did a lot of scratch-off in "Hey Look!", though in Kurtzman's case it appears that he wanted the reader to be aware of the technique.

(During the years of my teenage rebellion I snubbed him relentlessly and I think it really hurt him. The guilt still makes me loose sleep.)

You and me both Eddie, you and me both. I'm sure deep down inside your Dad knows it was for the best. Besides you have a family yourself.

Most cartoonists I know aren't even married and if they were they've been divorced several times with children that shun them. Heck my own mentor just went through his third and split with her a few months ago (you may know him he worked w/ Ralph Bakshi on a regular basis up until Cool World, but for his dignity I'll keep his name a secret on this blog forum).

From what I see Eddie you lived a full life so far, you definitely are doing a good job. It's hard to meet a cartoonist who still looks out for the bright spot in humanity and life in general. You aren't beaten yet.

I hope in the end I can find a wife who will stay with me and can start a family together.

>Herriman violated the paper with a razor blade, too. Original KRAZY KAT strips are all pitted and scarred.

Wow! These are great tips, Eddie and Mike!

I`m actually pretty good with a razor blade, I did Humphrey Bogart, Marlon Brando and Frnak Sinatra in scratch board for art class and they turned out pretty good.

When I get better at actual drawing I`m gonna experiment with this!

That is the goddamn best elephant ever.

When I read that George Herriman scratched his drawings to within an inch of their life, it really excited me. Sullivant's exciting too... It's a shame we don't have a more complete descripion of this technique, because it's hard to imagine EXACTLY how it worked. Seeing the orignals would be a step in the right direction.

I'm a big fan of techniques that allow copious use of a subtractive etching needle.

i got the cross hatching bug from Crumb, i guess. I like edward gorey, gustave doré, but recently i began to question if i'm not paying attention to the wrong stuff. Worrying about the icing, and forgetting about the cake. But the icing is so charming, i'll always have a soft spot for that. Oh, check this out.

I have a great little book on Sullivant that I bought at the Brandywine Museum-I'm 99% certain that it was issued for a show they did there(the Brandywine specialzing on 19th-20th century illustrators).
I should scan some of it, yes? I wonder if Mike has it.
Anyway, I'll bet good money that the Brandywine has Sullivant artwork in its vaults, if not on display; if not, then the Delaware Art museum would...I'm going to determine to see an original myself.

"I have a great little book on Sullivant ...
I should scan some of it, yes?"

David: Terrific drawings on your site!

Actually, the original Sullivants are scraped for a different reason.
Back then, there was a kind of bristol board that had three thicknesses of paper. If the artist made a mistake, he/she would scrape the top surface off. This was preferable to using white paint, the way a later generation of artists would do. The second, or third, surface of the board would be a bit more porous and so would make the ink line a little bristlier, but since the artwork was way oversized and reduced down extensively, this would not show. I used to own a Sullivant that had about half the drawing scraped off and re-inked. Elmer Plummer told me about this marvelous bristol board which naturally is no longer made.

I have an original T.S. Sullivant of flock of ostriches surrounding 1920's couple. Am interested in selling but not sure what its worth or where to sell it. Approx 15x25