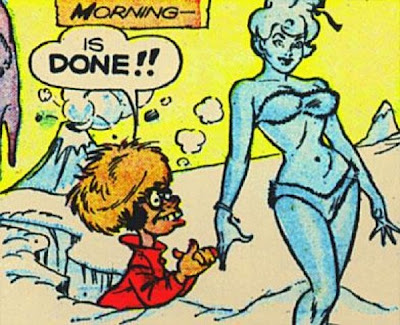 I couldn't believe my eyes! It was just too good to be true!  Steve and Mike did a tribute to Al Capp on the ASIFA-Hollywood Archive site! What's up there now is the first installment and they say there's more to come!
http/www.animationarchive.org/
This is a major, major event because the people putting it up are hardcore fans who know what the good stuff is.  Capp was immensely popular in his day. If you've only seen the second-rate strips then here's your chance to see what all the fuss was about! 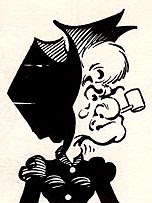 "L'il Abner" was far and away the best comic strip ever to appear in American newspapers. From the vantage point of the minimalist present, it's hard to understand how Capp could have put so much detail and creativity into a daily strip.  Even with assistants, you wonder how he managed to get any sleep! 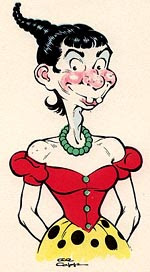 No doubt about it, Capp could draw women! He seemed to believe there were two types of women, the ugly and the beautiful. It's not surprising that he thought that way because that's not too far from the way that he caricatured men. His cartoonist instincts told him that humor lay at the extremes, a good lesson for us all!

According to Mike, Capp's assistant for a time was Frank Frazetta, one of the greatest girl artists of all time, but even when Frazetta drew the bodies (from Capp's rough layouts) Capp still insisted on drawing the heads and hands.  Capp's style of drawing female faces was absolutely unique. 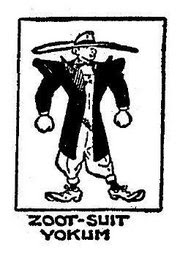 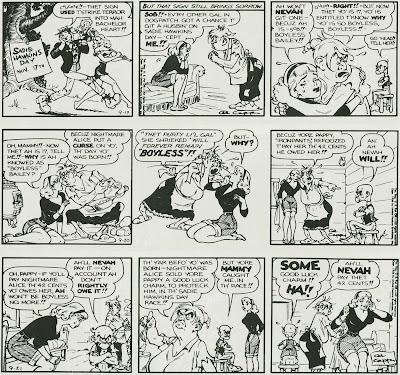 I don't know about you, but reading Capp makes me want to draw, which is the highest compliment one artist can give another. For cartoonists who can't afford art school here's a whole art education for the price of a few large paperback books!

L'il Abner lent itself mightily to merchandising. Collectors' stores are full of Capp stuff even now...most of it still worth having! 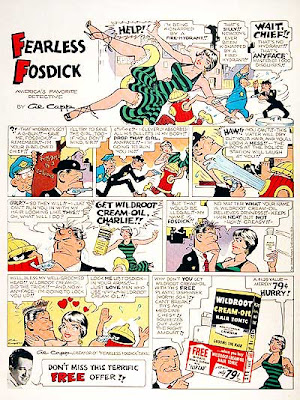 I'd buy anything endorsed by Fearless Fosdick! Can you still buy Wildroot? I want to get some, right now!

Posted by Eddie Fitzgerald at 6:37 PM

If the comics page today looked a THIRD this interesting, I'd renew my subscription.

"Mutts" is the polar opposite of Capp's work, because the artist who draws "Mutts" ( I have neither the time, resources or respect for the artist to look up his/her name ) looks like they can crank out twelve strips a day and be on the golf course by noon.

Sheesh. What happened? The shrinking of the printing size for one.... but they say that's due to the fact that the amount of newspaper cartoonists trippled from the 1960s to the 1980s.

Who knows? Bottom line, the artists that work in the newspaper comics today can't hold a candle to what Capp did.

The Horns and the Hawk said...

holy cow are those extreme women. boyless bailey is 5 alarm hot. hoo buddy. i tell you what.

A little side note, I remember reading a Frazetta interview, that while he was ghosting for Lil' Abner, he thought it was the best collection of inking he's ever done.

Dear Sir, In answer to your last question: yes.

Hehe the Boyless Bailey strip is awesome, nice delay in delivery too, too many comics now have really fast paces. And what's with the complete turn of position in the middle frame- It makes me question the continuity, is she stepped round? Anywho, i've never seen such contrast in drawing comics ever, such a pretty thing next to two REALLY ugly guys (one wearing an apron and tryin to look like a woman no doubt HA!) Great post!

Capp's lettering has an underrated charm to it as well. I need to buy some of them strips... Is there an archive of them online somewhere?

Wow, Eddie. That's a pretty risk-taking statement to call Al Capp's masterpiece "the greatest comic to appear in American newspapers". I love the strip, but I'm not so sure of that. How about Mutt and Jeff or Krazy Kat? Let's not forget Thimble Theatre, Odd Bodkins, Polly and her Pals, Nize Baby and Gasoline Alley. Lil' Abner was the best for its time, but is it THE best?

How did Boyless Bailey's parents manage to have daughter looking the way she does? Part of the magic of comic strips!

Mr. T: Aaargh! That modern Wildroot bottle is one of the worst-designed bottles of hair tonic I've ever seen!

Anon: You have good taste! Those are all worthy contenders! Unfortunately the Polly Sunday pages you see in the Bill Blackbeard collection weren't typical and the Krazy Kats loose a lot when printed in modern books.

It could very well be that Krazy Kat is the uber strip that all later funny strips derive from. If I'd lived in the era when Krazy Kat appeared in the paper I'd probably have a much higher estimation of it, but my exposure to that strip has been through books that usually print the strip way too small, with lots of drop-outs. When I finally saw originals at an exhibition a couple of years ago I nearly fell off my feet. They were great!

To your excellent list of contenders I'd add Barney Google, The Family Upstairs, Katzenjammer Kids, Boob Mcnutt, Little Nemo, the Feninger comics, Dick Tracy, Banana Oil, and That's My Pop! Of course some of these are by artists you've already mentioned!

What would a modern day list be? Calvin and Hobbes, The Far Side, Bloom County...... and all those strips retired 15 years ago!

A bit off topic, but elsewhere today I came across this post. You've commented before on Walt Disney, is this real?
http://www.holytaco.com/2008/04/21/mickey-mouses-attempted-suicide/

Anon: For me a modern list of newspaper cartoons would include Far Side, period. Very few people would agree with this, and I acknowledge that Calvin and Bloom have their good points.

For me the only good modern comic is Calvin & Hobbes, that's it.

I find the Far Side funny but the drawing is terrible and not funny. It reminds me of Family Guy.

I forgot to mention Far Side, sorry Eddie.

Gary Larson belongs in a class all by himself.

No one i know knows this stuff better than Mike. Great stuff. Good for him, and all of us!

Eddie please explain why Gary Larsons art was aweseome even though he wasnt an accomplished draftsman.

Here's your best resource for all things Capp:

Keep you eyes peeled for the upcoming Fearless Fosdick post. It's a humdinger!

That first comic masde me laugh out loud.