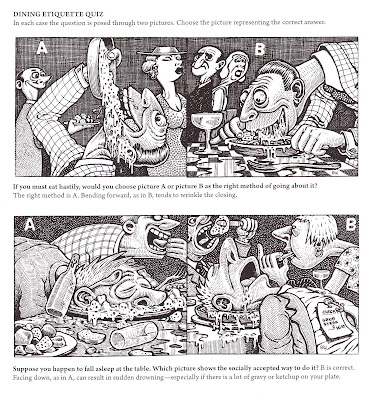 Have you seen the new Wolverton book, called "The Wolverton Bible?" Most of the book is about his Biblical illustrations done for his church, the same church that used to publish "The Plain Truth" magazine, edited by radio preacher Herbert W. Armstrong. The Bible illustrations are interesting but the real treat is the small last chapter, which contains previously unpublished or under-published drawings from his best period. A few of them can be seen here, above and below. 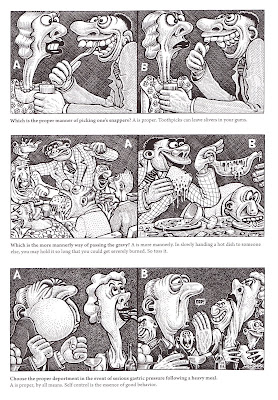 Of particular interest to me are the ones in the top two pictures, which were among those submitted to Harvey Kurtzman when he was editor of Mad in the fifties, and which Kurtzman declined.  Kurtzman published the best of the lot but these just didn't make the final cut.
Publisher William Gaines didn't like Wolverton. He thought the drawings were ugly and tried to talk Kurtzman into dropping them. Fortunately Kurtzman insisted and the masterpieces of gross that we're all familiar with were published, sans the pictures shown here.  I can see why these were turned down. They're funny but not as focused and polished as Kurtzman's favorites. Even so, they're still interesting, don't you think? 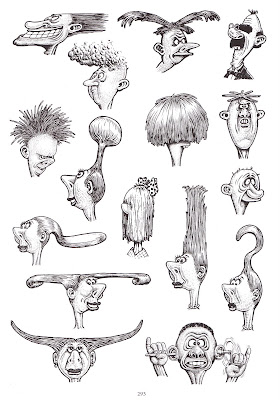 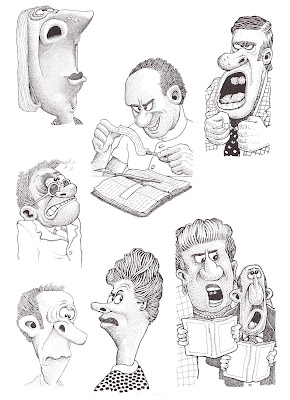 Some of these sketches were done for Armstrong's church, but were never (or seldom) reprinted anywhere else. Some of the people above were, believe it or not, depictions of character types Wolverton found in his own congregation. 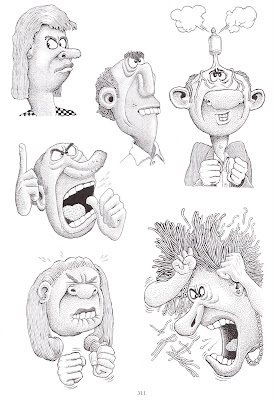 Armstrong reportedly tried to talk Wolverton out of cartooning and into serious illustration. He said there was no future in it because cartooning had run its course and would soon die. Actually cartooning thrived in the fifties, thanks to the efforts of artists like Wolverton.


Posted by Eddie Fitzgerald at 9:53 PM

There was an exhibit in Portland of a lot of those Bible illustrations last year, the originals are enormous and absolutely amazing. I'm a late convert to Wolverton's stuff, but I can't get enough of it now!

WOW his caricatures are so funny! Each of his drawings are just hilarious and rings distant bells of recognition of different variations on humanity's theme. And hilarious etiquette lessons! I have to go find some more of this guy.

No wonder they weren't published, if the congregation had seen themselves like that, they would have jumped poor Basil! I really like the first 2 about proper etiquette. "Don't pass the gravy, throw it!"

I think it's the coolest thing in the world that Basil drew like this and was still a preacher.

The things he did with line and mass were sheer genius. Not just ahead of his time but unique.

Wow! Thanks for this post, Eddie! I like his Bible illustrations too, and I've been considering getting that book---I definitely will get it now that I've seen there's cartoony goodness in it as well!

I'm such a huge Wolverton fan that I even named my cat Basil. I found her as a stray kitten the day I went to the Basil Wolverton exhibit in Santa Ana last year.

Holy crap, I have to buy this right now!

Anon: I looked up Mentler. He's a good painter of figures...but better than Wolverton?

Trevor: Better look at the book before you buy it. The funny drawings are only in a very small chapter in the back.

Mentler is like a commercial version of Francis Bacon.

I love Wolverton's humourous stuff (so inventive). But I'm not too keen on his (serious) stuff.

These "out-takes" are very interesting.

I salute you! This is an extreme act of benevolence for the followers of your blog. I take back all the bad things I've said about you in the past, especially the really nasty things uttered behind your back.

Wolverton had an amazing ability which Armstrong used to help him make another publication—1975 In Prophecy—a highly effective recruiting tool for his End Time cult. Wolverton actually signed the incorporation papers of The Worldwide Church of God in 1946).

My Wolverton Bible is on the way but I'd love to find an original copy of his doomsday mag too.