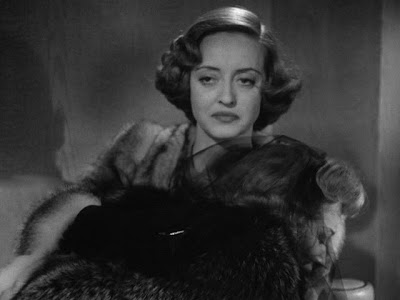 Ditto.
Posted by Eddie Fitzgerald at 1:01 AM

Jorge Garrido said...
This comment has been removed by the author.
5:36 AM

I was watching Dark Victory the other day, and Bette Davis was absolutely amazing in that movie. She played the part of a dying woman with brain cancer really well, while also making her as happy and stuck-up as she could. It's really a combination of a lot of personalities formed into one. The "prognosis negative" scene at the restaurant that she, Ann, and her doctor are eating at is brilliant. And oh yeah, Humphrey Bogart actually has an Irish accent in the movie! Now I definitely have to check out more of her films. I've never seen as many as you have.

Those happy cheeks and seedy eyes strangely remind me of Groucho Marx. Are you a big fan of his movies as well?

Modern actresses (and actors) can learn a thing or two from Davs.

Its great to see the stills of her acting. Her expressions aren't ever vague. Maybe complex, but not vague.

And she also reminds me of Warner Bros cartoons. Was that the studio she was with?

wasn't until i saw Pocketful of Miracles that i realized that bette davis was a pretty rad talent. And since then I've taken immediate notice of any film with her name in the credits.

I really enjoy watching Bette Davis as an actress. Unlike many of her colleagues, she could easily and convincingly take on glamorous and frumpy roles.

I also thought that she was one of the most interesting people in Hollywood. She didn't take from anyone, she was willing to fight for what she thought was right, and she was a straight talker. I watched an interview with her on The Dick Cavett Show (it happened well before I was born, so I watched it on TCM), and she was a scream!

What makes it more interesting is the person who posted it said that the video was made in the 1980s - without all that "new fangled" digital videos and computer editing. ;)

In an interview, some time during the Reagan years, Davis referred to Reagan as "little Ronnie Reagan". She said, with some ambiguity, " he did really well for himself." The way she said it though, it was like she was talking about a local shopkeeper.

Funny that Jorge should bring up "The Petrified Forest", as coincidentally I just watched it for the first time last night! It certainly was a different Bette Davis in that film than I was used to - so young and vibrant. I'm ashamed to admit that I still haven't seen many of her classic films. I really like "Now, Voyager" and "All About Eve", but there's so many I really need to see. I sometimes wonder if it's because my first introduction to Bette Davis was in her films of the 1960's when she was often a rather hideous crone who scared me that I never really developed a taste for her as an actress. I always was far more interested in the screen beauties like Audrey Hepburn and Kim Novak because I'm a shallow bastard, I'm afraid. :)

Off topic, sort of: I just got through watching Berserk, that 60s movie with Joan Crawford I told you about the other day that I was going to watch. It sure met my low expectations. It was a completely terrible film. Not even Joan Crawford could save that mess. Bad, incompetently written script, bad plot, hokey special effects and cutting, and crappy ass amateur acting from almost everyone except Joan herself. It was so bad, that a lot of it was actually hilarious. I felt like I was watching a comedy instead of a so-called horror film. The only movie I can think of that's even weirder than this at the time would be Otto Preminger's Skidoo with Groucho Marx on freaking LSD! Yeesh. I say that Joan should have puked on the script she was handed and either ended her film career then or fight for better roles, but it was plain sick.

Korge: Petrified Forest? Thanks for reminding me about that. Now I want to see it again.

In my opinion the best Davis films are the melodramas.

Roberto: Groucho's great! Berserk isn't a great film, but I still like it. Sometimes you can like films because they're interesting failures.

Jennifer: Thanks for the link! Bette Davis Eyes was the perfect soundtrack for that film and Kim Carne did a great job on it.

Pete: Eve's a great film, but Bette would have done an even better job if she'd made it five years earlier, when she was a little younger. Just my opinion.

A part of peoples from my generation (And it's included today's artists) don't even have the age and the maturity to be adults in society, that's what accomplish those Hollywood actress (and actors) you mentionned. We need to educate peoples about good acting like the example you show with Bette Davis.

I wish to see more of this Hollywood golden age films but i vaguely watch TV because they don't aired those films anymore.

Funny you should bring up Bette as a possible springboard to a cartoon personality, because -

The way that John K extemporizes on the voices that inspire him -Lorre, Douglas, Ives, Fine et al.- has inspired me to think about character development though vocal experimentation. I'm interested in creating a girl character and starting out by gradually coaxing a new personality out of an impersonation, much like John did with both his own voice and by describing his "childish Larry Fine" idea to Billy West. Obviously I can't use my own voice if I want her to sound anything like a woman, so I will be relying on a female voice artist. But my aim is to start with Bette Davis and maybe a bit of Rosalind Russell and then work outwards and inwards from there. Of course, I'm sure I'll come off as a total autocrat and drive everyone insane, but hey, John wasn't afraid of doing that, so why should I be?

(Hey, why am I even putting this out there? Someone's gonna steal it all! Eh, I just like sharing, I guess...)

Bette Davis is my current muse as far as acting goes. I can't keep my eye off of her. She has lots of nervous energy in her performances.

I read the book Dark Victory. She had a lot of issues. Drinking made her very volatile and hard to be with.