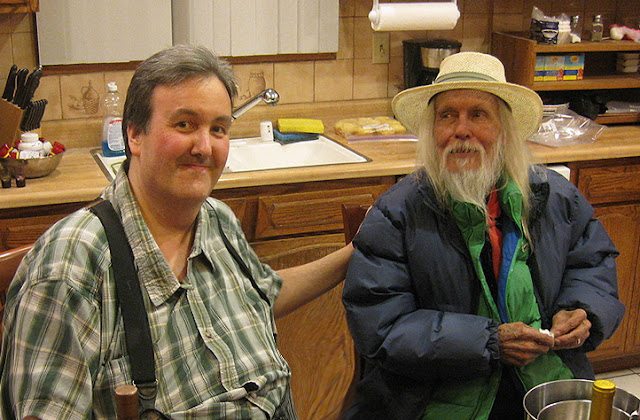 Weeell....if you weren't at Steve Worth's last night, TOO TOO BAD! You missed a chance to meet ace Twilight Zone writer, George Clayton Johnson (that's Steve on left and  George on the right, above). For readers who are unfamiliar with George, here's a yeoman introduction cribbed from Steve' blog, Animation Resources:

Mr. Johnson was one of the principal writers on Rod Serling’s “Twilight Zone”, writing both stories and screenplays for such legendary episodes as “The Four of Us Are Dying”, “Kick the Can”, “A Game of Pool”, and “Nothing in the Dark”. He also was the writer of the first regular episode of Star Trek to air, “The Man Trap” and the feature films “Logan’s Run” (he co-wrote the novel the film was based on) and “Oceans 11″. He was part of a group of Southern California science fiction writers that included Richard Matheson, Ray Bradbury and Charles Beaumont. He collaborated with Ray Bradbury on the story for “Icarus Montgolfier Wright”, an Academy Award nominated animated film produced by Format Films. 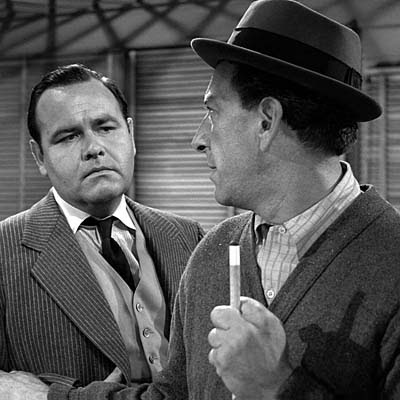 I came to the event with a bunch of questions for George, foremost of which was this: how does a dramatic writer fill in the details of a story without being boring? In George's Twilight Zone episode "A Game of Pool," the whole extended middle was a pool game. Now how do you make a thing like that interesting?


The answer isn't obvious. I'd just seen the episode and there wasn't a single second where the film was less than fascinating, even though there were no fights, shouting matches, power outages or third characters. How did George keep the interest level so high? You're going to die when you hear what he said. 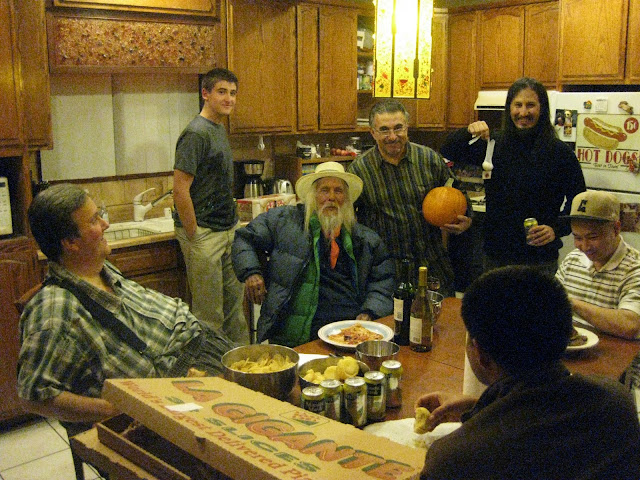 The answer in paraphrase was...personality...character friction...two appealing ideas in conflict...the gradual unveiling of an overriding great thought...and. of course, suspense about the outcome of the game and how the story's going to end.


Fine, I reply, but what kind of character conflict could possibly keep our interest for so long? One man's a seasoned pro and the other's a talented usurper. So what? What can you do with that, that hasn't been done a million times before?


George's answer was that I hadn't done my homework. I should have paid more attention to the human relationships on display in the street. It's not enough to characterize people as pro or usurper, or shy or extroverted. You have to try to understand why they're that way. Their outward actions are a manifestation of their inner ideas about the world. Exactly what are those ideas? What happens when those ideas are challenged? It's not anger, it's something more interesting. 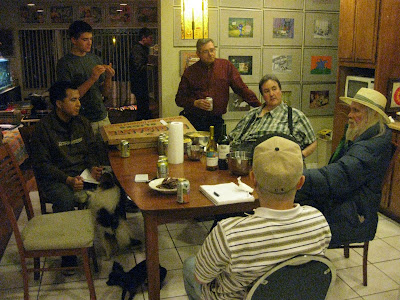 Holy Cow! When all those things come into play, the task of filling up the middle of the story seems like fun. In fact, the middle now becomes the most interesting part. Thanks, George! I'll never look at that problem the same way again!


BTW: are these theories relevant to animated comedy? Mmmmmm...maybe not exactly. Cartoon comedy has its own rules. But they're still very, very interesting, you have to admit.

Posted by Eddie Fitzgerald at 12:36 AM

Awesome post Eddie! I just saw "kick the can" the other day and absolutely loved it. I'm fairly new to the Twilight Zone but am always thrilled when im flipping channels and it's on.

Another great point he made is that the writer needs to passionately believe both sides of the argument equally. If he favors one side over the other, the tension is lost. He said that he's able to believe things simultaneously that seem contradictory... "He who hesitates is lost, but look before you leap." Humans are not totally logical. If they were, things would be boring.

That's embarrassing on my part to not even know who this great man was. Thank you for clarifying that, Eddie. Looks like from the photos, you guys sure had a lot of fun. Happy Martin Luther King, Jr. Day!

That must've been a great experience. I've been dabbling screenplay lately, so it's something that's relevant to my interest.

And I disagree. I think George's theory can be relevant in animation. If necessary, it might have to be tweaked, but the gist of it can work.

Steve: Good point! A writer really does have to believe in both sides!

Actually the point about believing contradictory things was mine. The "he who hesitates" example was George's.

George is as great a conversationalist as he is a writer and speaker. He always has terrific ideas of his own, and when you venture out with an idea, he gets it on the first hearing and builds on it.

eddie, thanks SO MUCH for relating this information about character conflicts! It makes so much sense to me right now... this ties in soooo much into what I've been recently studying that I'm nearly speechless.

I've been reading about how the world isn't what it is as it appears to us, that the concept of 'reality' is really only a perceived reality for each of us based on our personalities, and that we all carry our own realities around with us. Everything that we interpret we view through filters and lenses of our own realities, and we're constantly looking for more feedback from our environments to reaffirm our realities. (hence, we become 'more like ourselves' as we get older.)

And more importantly is how these realities form, and what happens when two strong realities clash either in a person, or between different characters.

So fascinating to hear that this is the same concept (just described differently) that George is talking about!!!

George didn't just talk about it, he put it in practice. Check out A Game of Pool and Nothing in the Dark. Textbook examples of his theory in action.

George was a whirlwind of inspiration and creativity! He has so much experience and consideration put into his opinions that it's a real revelation to hear him speak!

If you guys weren't there, look him up on YouTube!

His quote reminded me of F. Scott Fitzgerald:

Ill be kicking myself for a while over missing that event. But I'm glad you were there to enjoy it.

Pappy: My guess is that most people hold contradictory beliefs, not just intelligent people. I know I don't believe in ghosts, yet I wouldn't spend a night in a haunted house.

That kind of thing came up on this site a few months ago when a few of us argued about whether Hitler was an aetheist or an occultist. Forget about the contradiction: I think the truth is that he was both.

Alex: You should rent the movie "Moonstruck." Watch the way Cher's mother behaves. The writer put all your theories into that character.

So cool! I wish I could live in LA! Aaaaargh!!

Thanks so much for sharing some GCJ love! I interviewed George at great length by phone for FILMFAX years ago, and was able to meet him in person at the 2005 Stoker Awards Weekend, where he did a TWILIGHT ZONE panel with Matheson. I also quoted him extensively regarding his personal and professional association with Matheson in my book RICHARD MATHESON ON SCREEN (http://www.mcfarlandpub.com/book-2.php?id=978-0-7864-4216-4). One small correction: George was not directly involved with the film of LOGAN'S RUN, but co-authored the novel on which it was based with another member of their literay circle, William F. Nolan.

Mathew: Many thanks for the correction. I just amended the article to fit it in.

Your book sounds great! When I was a kid I was awed by the literate dialogue in Incredible Shrinking Man. I still am. I read the book of "I Am Legend" while still in high school and I remember thinking, "Man, this guy can write!"