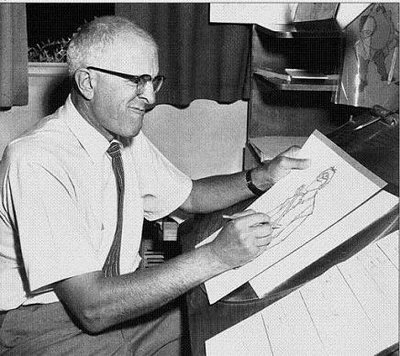 A lot of animation fans don't know that Milt Kahl, one of Disney's greatest animators, was actually laid-off by the studio for a number of years. This is how it happened.....

Kahl was a well-known discontent and once every six months or so he'd throw his pencil down, storm into Walt's office and threaten to quit. "None of those idiots can animate! I help them with their scenes and then I have no time for my own. They're just a bunch of bums! I'm in there holding up the whole damn animation department by myself! I don't need this aggravation! I'm outta here! I quit!" Walt, who'd been through this many times, would just look at him sympathetically. 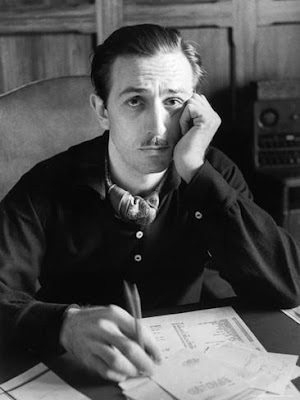 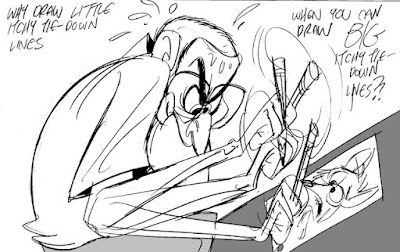 Finally, when Kahl was at the height of his rant, Walt would discretely hit the intercom button and whisper, "Bring me the envelope." His secretary would come in and quietly slip it to him. Meanwhile Milt would still be fulminating: "Those #$&@ lard asses couldn't do a thing without me! This whole stupid studio would crumble without me!" Walt would listen attentively while slowly nudging the envelope across the desk. 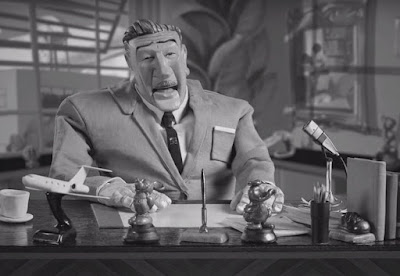 "Huh," says Milt,"What's  that!? A bribe!??? Oooh no you don't! You can't buy me off! I mean it, I'm outta here!" More ranting then something green was added to the envelope and it was nudged across the desk again. This ranting and nudging would go on and on until finally Kahl stopped in mid-rant, stared at the envelope, looked inside, then grabbed it and went back to work for another six months. This went on for years and it was a marvelously effective system. 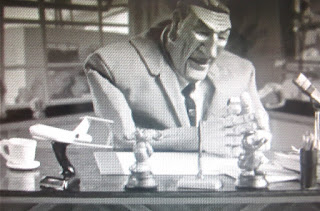 Eventually Walt died and his son-in-law Ron Miller took over the studio. One day Kahl pushed past the secretary and stormed into Miller's office threatening to quit. "I've had it," says Milt, "I'm the only one around here who knows what he's doing! I'm tired of this %@#& hell hole! I quit!!!" Miller was shocked. All he could think to say was something like, "Gee, Milt! I'm sorry you feel that way. We'll all miss you very much!" Do you see what happened? No one told him about the envelope!!! 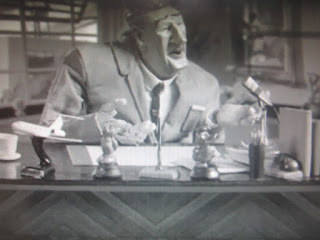 Kahl was dumbfounded. "You think I'm kidding, don't you? I really mean it, Ron! I'll walk out that door and never come back!" "Yes," said Miller almost tearfully, "I know. It's very sad!" Amazed, Kahl turned his back and stormed out of the office. He was gone for years!

This story was told to me over lunch by John Kimball.  Pictures thanks to Creative Capers, Mike Pelensky and Andreas Deja.


Posted by Eddie Fitzgerald at 7:00 AM

I heard they're putting that story in the sequel to John Canemaker's book about the nine old men. Plus the story about how Frank and Ollie got smashed at the Snow White wrap party and "accidentally" made out with each other.

I think it's called the famous "makeout story". I could be wrong though, maybe Mike Barrier knows.

Animators make the best faces- you and John specifically!

EDDIE, I'M SICK AND TIRED OF YOUR THEORIES! I'M GONNA WALK OUTTA THIS BLOG AND NEVER COME BACK!

your pal (for the next six months)
Steve

I had never heard this story before, but it's completely wonderful!

I gues this finally proves that Walt was adept at pushing the envelope in the field of animation!

Tom: Thanks! I can't wait to read your book!

Great Milt Kahl story, Eddie.
Milt is one of my favorite animators and it's nice to hear stories about him that I have never heard.
I knew he was a hot head but Whoa!
That story takes the cake!
Thanks again!

i like these stories, you tell them really well

How come all my favorite cartoonists are grouches?

Another famous Milt Kahl quote: After he retired upon completion of the Rescuers, Ralph Bakshi offered him a job to work on Lord of the Rings at a very good salary. Supposedly Milt growled:" Nah, if I wanted to keep doing sh*t, I woulda stayed at Disneys'!"

Kahl was also one of the biggest haters of the live-action footage shot for the animators' reference (Cinderella, Alice in Wonderland, Peter Pan). He called it a "crutch" I believe, and I couldn't agree with him more.

What if, instead of a bribe, what Walt was offering was some sort of blackmail?

I mean, the envelope is a mcGuffin in that story.

Hahaha, what a great story :)

Thanks for sharing this, Eddie!! :)

By blackmail you're not alluding to the fabled Milt Kahl "hunting accident", are you?

>Kahl was also one of the biggest haters of the live-action footage shot for the animators' reference (Cinderella, Alice in Wonderland, Peter Pan). He called it a "crutch" I believe, and I couldn't agree with him more.


You can pick of on subtle ticks and gestures you wouldn't notice with live action reference, couldn't you? Although, I suppose a REALLY good animator wouldn't need it. I'd place it far above rotoscope, though.

What Eddie failed to mention was that that the "envelope" contained a half ounce of weed. Would mellow him right out.

Milt Kahl animated Shere Kahn without any live action footage reference. And it was a tiger AND George Sanders.

I am fascinated by the veneration of Kahl's inferior work. Everyone is nuts about Madam Medusa and Mowgli. Give me the B'rer Fox threatening to skin B'rer Rabbit any day if the week !

Ricardo: Wow! An interesting point! I agree that the B'rer Fox animation is superior. My favorite Kahl scenes are the ones in the Goofy tiger hunt cartoon, but B'rer Fox was certainly some of his best work. For reasons I don't understand Disney took a turn toward less cartoony styles and I guess Medusa and Mowgli were seen as examples of how realism might still retain a cartoony feel.

I like your choice of Bluto for a visual icon.

Bluto is my role model !