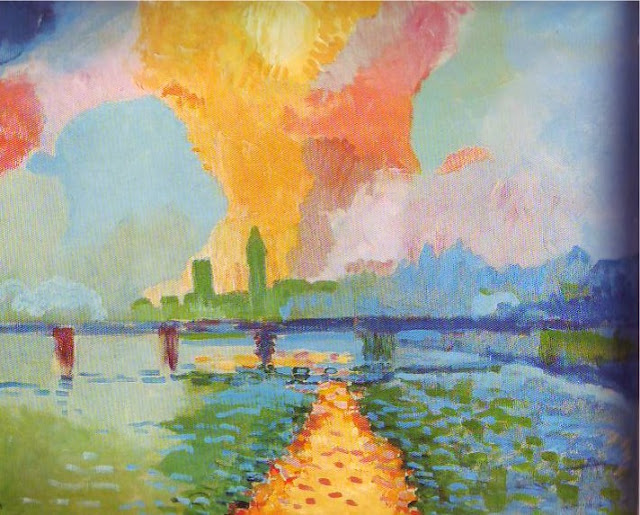 Most of the cartoonists who visit here hate the Fauves. Me, I love them. Here's (above) a 1906 Derain showing the Thames near Charing Cross bridge in London. His color seems to have poured down into the water, caught fire, then was guided toward the indigo bridge by seething bits of green energy. What's not to like?

It would be a mistake to think of this as some kind of drug-induced LSD vision. Derain uses false colors in order to make us realize that the colors we see every day are just as bizzare. We should see color the way a formerly blind man would see them on his first few minutes of sight. For such a man shadows wouldn't be subordinated to local color, they'd be independent forms. Lines would just be lines, they wouldn't define a shape and colors would battle for dominance. This is the violent, alien world Derain paints for us! 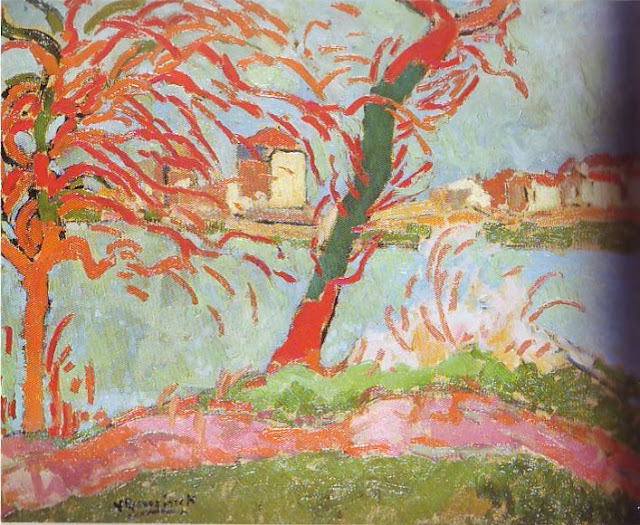 Here (above) is Vlaminck, also 1906. Red leaves on the red trees are no longer content to be decoration. They radiate and burn themselves into the blue sky behind them. Leaves seperate from the trees and gyrate in mid-air. The red and pink path carries this crazy energy to other trees. It's an alien force being unleashed, a force that was there all the time but we never noticed it.

Of course I'm only guessing that this is what Vlaminck had in mind. Artists need to have fantasies about the pictures they paint so they can see their subjects in new and exciting ways, and the same goes for viewers. 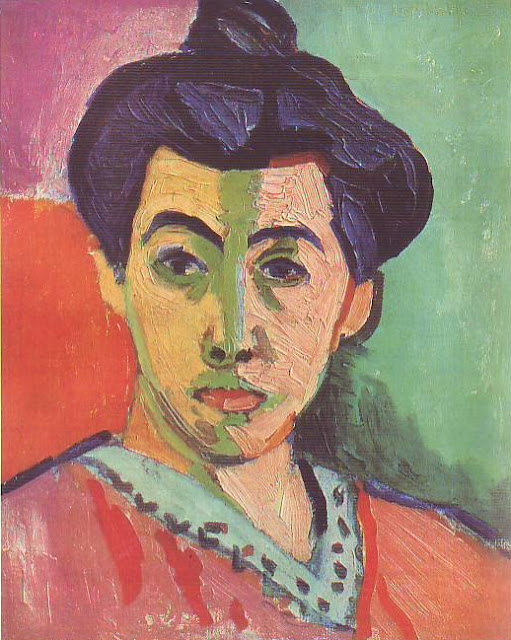 Here (above) is Matisse's famous green stripe painting, also 1906 I think. The face is both flat and three-dimensional. The colors in the backdrop refuse to be background and come forward to compete with the foreground. The face plane is stressed and appears to be in danger of splitting.

The green strip painting influenced a lot of painters in Matisse's time and continues to exert an influence today. Here (above) is a Matisse-influenced face by illustrator Phillip Burke. The surface tension is much reduced from the Matisse original but the color is still exciting.

Posted by Eddie Fitzgerald at 7:41 PM

even though I don't post much here I love these posts about Fauve...my only thing is that the first picture makes it look like the city is being bombed..

The red tree with leaves is my fauvorite. It reminds me of the Lorax.

I can see where Wayne Theibaud got his influence :).

if only my art teachers were so eloquent! great post. Every once and while while i'm out walking around i see things in such an alien way that I totally understand Fauvism. I love it when artists are brutal. Especially when it's truly beautiful.

I'd love to see these in person. I'm sure it is the same world of difference you get when you view a Van Gogh or Jackson Pollack in person, as opposed to some washed out print.

I had an idiot of an art history teacher who first introduced me to this stuff. He was very animated, but at the same time, he seemed to be just going through the motions when he did his shouty shtick about outrageous colours. Perhaps he influenced my view of these paintings and made them seem as adolescent as he was.

Fauvism is one of those things that I can see... needed to happen, possibly... but I have historically found a lot of the paintings crude and a bit silly... naive, maybe.

But your descriptions are winsome, and yes, artists do sometimes need to... romanticise... 'overblow'... the intentions in their own work. There was a lot of that in the Modernist era, and not a lot of it now. I suppose that 'we're creating the future!' thing was a hangover from Romanticism, and that now if artists are self-important it tends to be either pure ego or pure self-promotional cynicism.

I'm being a bit rambly.

But I very much appreciate reading your point of view on twentieth century painting. It's a much more humane and considered point of view than most of the cliche curricular one I was fed. It seems right to revisit this stuff with the benefit of hindsight, and fascinating to look at it through the lens of non-artworld cartoonist renaissance men such as yourself.

I never made that connection between Phillip Burke and Matisse... that's interesting!

Hi Eddie. Great blog, I read it daily. It's actually refreshing for me when you post subjects of varied nature such as this. Back in illustration class, many eons ago, I once drew a hand in what one could call a Fauist sytle, color-wise. My prof didn't like it because he said the Fauves wouldn't draw just a hand. That's a great example of how his sense of expression was completely guided (or misguided) by a strict and conservative ideology, and that's why I jumped to electronic imaging, regrettably.

The artists looked at and observed life. The brush stroke was very meticulously chosen for each painting to achieve the mood and emotion that the artist was trying to reveal to the world in a new light.

I'm not sure that it's really false color Eddie. It is very akin to the brilliant hues the we see at magic hour.
Keep posting the old master pal.It cant always be about the ducks and bunnies ya know.

To me the colors are just ugly.

Hi, Eddie! I was reading through the early-early posts on John K's blog and saw one where he mentioned you and how you should get a blog. He said you had all these awesome theories, in particular he mentioned theories of saliva, and how couples all look the same. When are we gonna hear those, huh Eddie?! Saving the best for later? Are they too soul-crushingly mind-rending to unleash upon us? Or have they come and gone and I already missed them?

"...particular he mentioned theories of saliva, and how couples all look the same..."

So you know, Dustin, that is actually one theory. It sure is a doozy! It really splits your side. My favorite is his eating peas with your butter knife theory. Eddie's innermost thought process is a mystery to us all.

Sean: Who is wayne Theibaud?

Sean: Who is wayne Theibaud?

He's the master of complimentary color painting and was a big influence on the color bg's for one of David Feiss's last shorts for cartoon networks' "Lost Cat." (at least that's what I remembered from the credits). Wayne Theibaud's work was really popular in San Francisco.

As an art student in 1972,I first came across Picasso's self portrait "Me Picasso 1901". The wild vibrant colour with the GREEN LINE running down the side of his face and Matisse's famous Lady with Green Line in 1906, were very much Fauve in style. I am sure Matisse was familiar with Picasso's work.