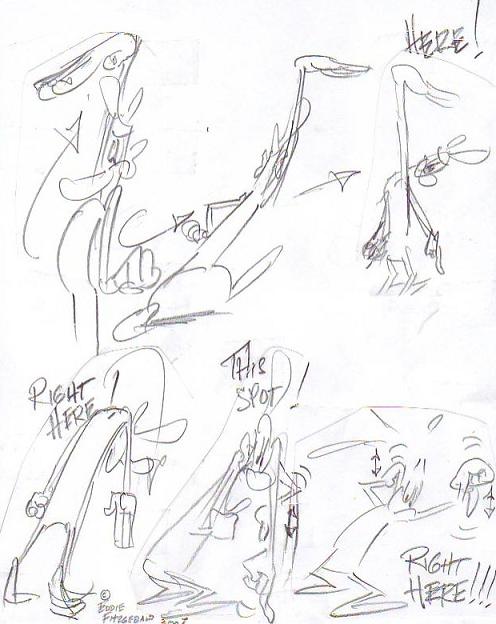 Animation acting isn't the same as live-action acting. Our medium requires that whatever action we draw also moves funny. That means the story has to be written with cartoon posing in mind.

In the action above, the story point might have been satisfied by having a nervous character point to the ground and say, "Here! Dig here!" In the drawings above I use twice as many words as that. Why? Because certain actions look good in cartooning and pointing is one of them. I just wanted to milk the drawing opportunity. The words are repeated simply as an excuse to have fun by drawing more pointing poses. Of course the story has to contain characters that would plausibly act like this. Stories written by writers rather than cartoonists seldom do.
Posted by Eddie Fitzgerald at 12:05 AM

WOW!!!!!
YOU ARE A GENIUS!
Its a crime against nature you dont have your own show!

Anonymous said...
This comment has been removed by a blog administrator.
6:24 AM

if you didn't have that drawing to show us, you could still write a book and i bet a lot of people wouldn't get this theory. Words don't do justice to these ideas, the only way to really show what you mean is visually.
Your stuff is great, Eddie!

You know you are a genius, right? Can I one day be your assistant?

Oh, lord--Eddie, how can you stand all this fealty?!

If you compiled your doodles into a book I would buy copies for everyone I know.

Did you ever think that one day you'd have many fans oogling at and willing to pay money for your effortless doodles?

This is OT, but Eddie, did you work on DIC's Wacky World of Tex Avery?
I notice that your style is very close to the character designs on that show....

My two favorite posts yet, Eddie. I've heard "specific" acting all over, but this puts it into a simple, concrete, digestible pill with only a couple side effects that is easy for the masses to swallow. Cheers!

How about inaction, Eddie? It strikes me that the act of explaining or exposition relates to good poses also, while not really being an action in and of itself. Lots of flailing of limbs and all that. Lends itself well to the babbling on that sometimes needs to happen in a comic strip.

how would another character behave in the same situation? its fun to think about.

When acting or animating dialogue, here's a simple exercise: avoid the "panhandler" pose (that fakey bit of non-business that consists of standing the character straight up and down with one palm extended)or the finger point (much harder to avoid) Throwing the entire body into a pose is a much more effective way to communicate. I know you said this applies to cartoon acting only, Eddie, but I've found that this does wonders for live actors performing on stage also.I picked up a lot of stage acting tips from watching old Looney Tunes.

Live-action comedy writers are never burdened with specifics, beacaue they are up to the actors.

So when writers write cartoons as if they were simple situation comedies, the animators have nothing, because the characters are not capable of adding spontaneous acting flourishes, as a human in front of the camera can.
Nobody in the process anymore seems to understand that the acting is where the fun is.

It's so obvious and plain that cartoon writers need to be something else, something that enhances and encourages cartoon acting (which is where the payoff is-- not in absurd situations that real people could just as easily be shoved into), that I can't believe John K. has to run around convincing everyone that the old way was the best way.

I saw a cartoon u did called "radio with a bite". I've read some John K. comments about the Beany and Cecil project and they were not too good. But I marvel at how much life and fun you managed to get in, anyway. I came away smiling, and I was smiling because I saw characters having FUN. How did I know they were having fun? THEIR POSES TOLD ME.

Promoting awareness is the first step in curing any societal illness, but this increased awareness will also have to result in some kind of changes in distribution and promotion before this dysfunctional trend can be reversed.

The trend of searching for a 17 year-old who can scribble the "next big thing" has also got to stop.

I have been searching for the key to cultural decline over the last 50 years and I believe I have found it. I may write a lengthy treatise on it for publication elsewhere, but I will give it away right now, as I know that Mike F. wrestles with this one.

More accurately teenage surplus spending money regardless of the source. It's the concept of marketing to teenagers and post-teens that has changed everything from the way it used to be.

Nobody used to care what kids like. They didn't have any money.
Nobody today understands that kids don't know what they like. They have never seen anything. It's up to adults to give them good choices, not to cater to their malformed whims.

I'm being general enough that somebody can poke holes in it. I think there is truth in it, anyway.
Maybe. But I don't really care.

Next up on Theory Corner: the use of hands for dowsing for hidden deposits of Schmidt's or Rheingold.

(Well, why else would the fellow be pointing at the ground with such urgency? Unless he knew of the long-lost site of the Butterscotch Krimpet mine.)

Nah, he's just proud of where he properly disposed of the Jose Cuervo Black.

I don't: "Radio With a Bite?" i don't remember the name. If it was one of the Beany and Cecils then I definitely disavow it. Nothing against John who line produced the show and who made every effort to be helpfull, but episodes with my name don't reflect my film theories and seem as remote from my sensibility as films made by nomads in Timbuktu.

The allowence theory is interesting. It would be amazing if such a big power shift originated from such a small cause. Feminists certainly benefited from the attention of advertizers. Maybe teens and kids got the same benfit.

It doesn't also help that most writers don't write characters these days. Their dialog is so "on point" its sad. Anyone can say what those characters say. There's nothing specific in the dialog, let alone behaviors.

I can tell you one huge difference between animation acting and live-action acting. In the former -- there are no actors.

Sorry Lester,
gonna have to disagree with you.
"Voice Actors & Animators". There's your acting...

>I don't: "Radio With a Bite?" i don't remember the name. If it was one of the Beany and Cecils then I definitely disavow it.

"Sorry Lester,
gonna have to disagree with you.
"Voice Actors & Animators". There's your acting.."

... people who do voicework don't do most of the the stuff that Eddie is talking about. Animators aren't actors at all, but something that has no precise equivalent in live-action film. Maybe they are closest to those directors, like von Sternberg and Hitchcock, who tried to use actors as if they were sock-puppets.

When Hitchcock said "actors are cattle," what I think he really meant, in a way, was that he wished he could be an animator -- elimanate the middleman, that pesky intermediary between the real artist (director, writer, etc.) and the audience.

Well Lester, Hitchcock DID say to Walt Disney once, "You're lucky, if an actor gives YOU trouble, all you have to do is tear him up and start over."

...episodes with my name don't reflect my film theories and seem as remote from my sensibility as films made by nomads in Timbuktu.

Well here's the thing. You are better than those episodes but it was clear to me that somebody worked on "Radio With a Bite" that knew things that people who work on most cartoons don't. I'm comparing it to other TV cartoon fare and I found it more watchable than most of it. You must be able to name 10 cartoons on the air right now that are far less appealing.

mike fontanelli said...
This comment has been removed by the author.
5:19 PM

"Well Lester, Hitchcock DID say to Walt Disney once, 'You're lucky, if an actor gives YOU trouble, all you have to do is tear him up and start over.'"

He would be tearing up Mickey, not the mouse who plays him (no such animal exists).

Lester, Hitchcock was making a JOKE, which means you have to take a little license, and not be so literal in the comment's interpretation. I'm sure he was aware that Mickey was just a drawing.