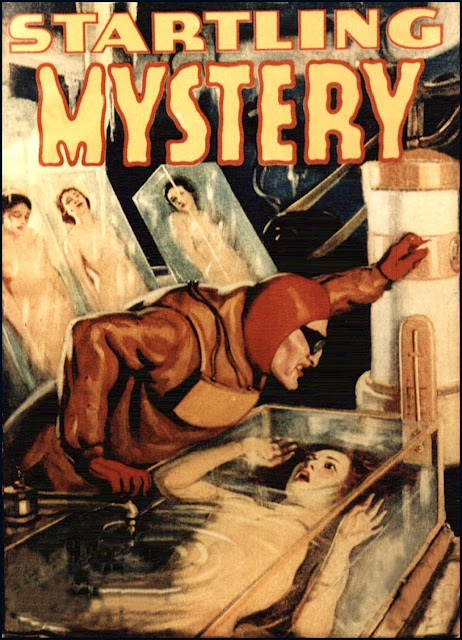 I'm a huge fan of 30s pulps (random covers above and below), and my favorite part of those stories is usually the beginning. I just can't believe how quickly pulp writers could establish a mood and get the reader involved. Fans wanted their thrills as quickly as possible, and publishers were eager to comply. I thought you might like to see a few examples, sooo.........

What do you think of this opening from "Return of the Death Master" by Curtis Steele?

"The subway moved through the ground like a snake in a tunnel. It slid smoothly across the tracks, its single nose light stabbing outwards like a glowing Cyclops eye. It was the only light anywhere in the train. Inside, everything was dark."


Wow...a Cyclops of a train speeding through the night time subway tunnels...and the inside is dark. Why? Is it a runaway train? Is it controlled by a madman? Four short sentences and you're sucked in. 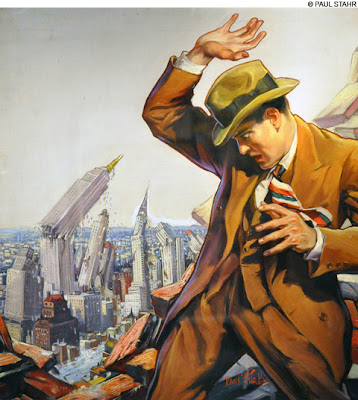 Here's (below) the opening of another train story, 'Corpse Cargo' by Grant Stockbridge. This one starts a little slower:

"Within the train all was peace and quiet. The overhead lights were dim and the green curtains hung heavy and dark, swaying now and then to the rhythm of the speeding Island Limited. The gray-haired conductor walked slowly through the dimness, stopped a moment in the doorway of the men's smoker and glanced in at the white-coated porter busily shining shoes. 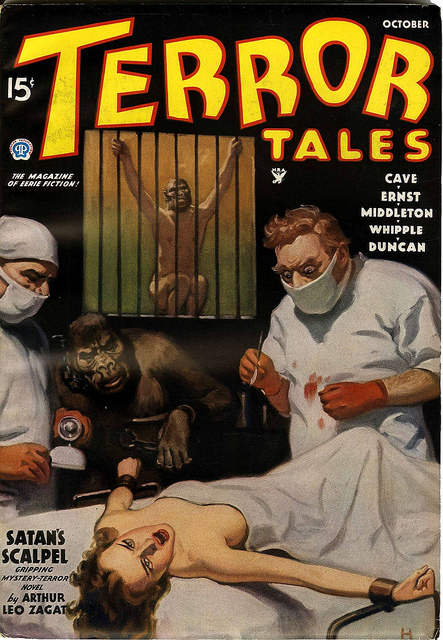 The conductor pushed on along into the car proper and looked weary-eyed along the swaying aisle. Somewhere a baby, awake in the night, gurgled. A mother murmered soft, lulling words---as on the hill the woman gripped Bolo's arm and hissed, 'Now! Now!'


The conductor was smiling, his ears filled with the mother's soft humming when, like the fury of hell, the green fire struck! It struck like lightning, like a bolt from blue, cloudless skies. The dim, sleeping aisle of the pullman glittered suddenly with liquid light. Green-white chains of flame that struck like vicious snakes stabbed out from every metal thing upon the train, from the steel sides of the coaches. 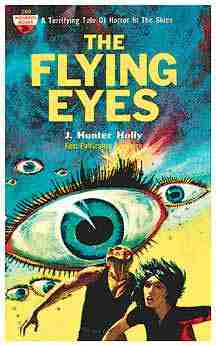 The old conductor's face twitched convulsively and the chained lightning of the killers danced in fiendish glee. In the smoker the negro porter writhed upon the floor. In their berths, men and women and children tossed and jerked in the torturing grip of incredibly powerful voltage. And everywhere through the train the green, horrible light wavered and danced." 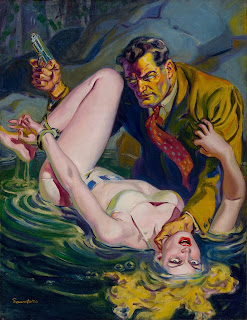 What do you think of this one (below)?

"Night, black and rain-swept, shrouded the Kirty Institute for the insane. Gusts of howling wind attacked the ugly gray buildings like seas pounding some bleak, rocky coast. There was the same impression of desolation, of a savagely forbidding place that humans shunned.


A small car lurched to a stop in front of the guardhouse at the gate. Two men got out, collars upturned, hats pulled low."


Geez, this (above) set the mood in the very first sentense! 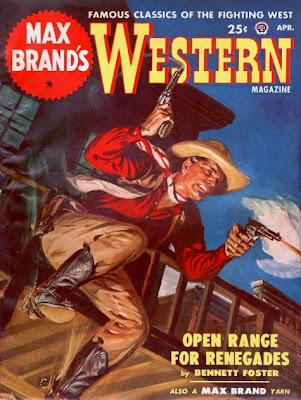 I'll end with a story that starts in the middle, so as not to waste a single moment of the reader's time.


"A faint, almost imperceptible, click sounded in the room. The floor beneath Conners' feet dropped like a gallows trap. What had been solid, shining mahogoney was suddenly a gaping black void. The white man stumbled forward. His gun fell from his grasp as his arms shot upward, then he shot through space. Down, down, into the darkness below.


The native servants stood blandly silent. The vagaries of their master were not new to them. From the opening in the floor there came a horrible scream of terror, that echoed ominously through the room like a banshee's wail.

"sentense" That's intentional, right? If it's a spelling error, it's a damn good one.

The ape in the O.R. on that Terror Tales cover is the only one in the picture I could trust to do a surgical procedure. His expression is calm, pensive and intelligent (not crazed - for one reason or another).

Gotta go. I have a train to catch.

Even though I'm highly sick at the moment, nothing beats a start to a four-day weekend with some eye-popping pulp fiction covers! Never seen any of these before. The one with the operating doctors is my favorite one.

As I've might have said in the past, I live around Atlanta, Georgia, and apparently, my state has these snow make up days. Since it didn't snow this year, like it has been for three other years in a row, they've designated today as a student-teacher holiday. What a deal and Monday is President's Day, which gives us another day off.

Raised my SATs over 80 points by the way, not to brag or anything, nearly making a 1700 composite even. Glad I got that out of the way. That had been bothering me for months.

Norman: Oops! Thanks for the correction! I changed the spelling.

Eddie, here's a great anthology of pulp adventure stories. It's a bargain, and you get almost 900 pages of stories. They packed them in by printing them in double columns, but the typeface is large enough so it's still readable. Check it out! There are two others edited by the same guy that collect pulp detective stories. They're also a steal.

Stephen: Many thanks for the link. Sorry it took so long for me top reply. I read about the book you linked to, then I jumped to other books from there. I'm so glad this stuff is out there!