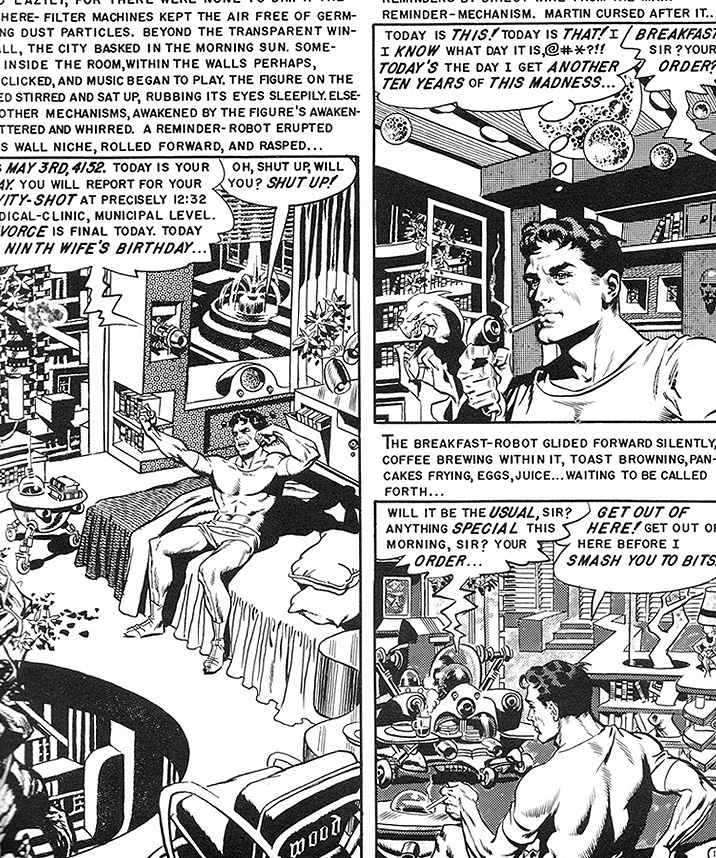 Weeeeellll...here we are with Wally Wood again! I hope you'll indulge me with one more post about about him...this time about the subjects he chooses to draw.

Of course Wood didn't write his own stories in this period. This one was ably written by Ray Bradbury. Ray packs the story with great visual ideas and Wood, as usual, adds a bunch of his own. Sorry I had to crop out some of the dialogue in order to fit everything on the scanner.

How do you like Wood's vision of the future? We see the robot servants, the hole in the floor that reveals that the apartment is probably on the 50th floor, the plants that grow through the bookshelf, the planetary models hanging from the ceiling...it's a feast for the eyes. The guy in the story hates it, but Wood and Ray can't hide their love for it. This is an important point, and I'll come back to it. 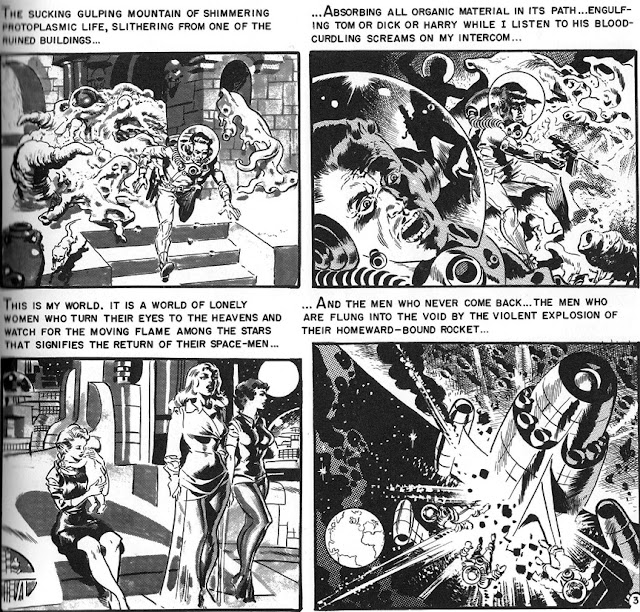 Here's (above) an excerpt from a story by Feldstein which contains lots of favorite Wood subjects: monsters, gorgeous babes in fantastic settings, and rockets flown as casually as people ride automobiles now. This is the stylized future the audience craves to see.

Other comic book artists draw the same things, but view them as background for the story. For Wood the atmospheric elements are the story. He figures that plot and character are the writer's job...it's the artist's job to provide mythic, aspirational subtext and unforgettable images. Wood isn't just an illustrator of other people's ideas, he's a partner.

Another point I want to make is that Wood always chooses to draw things which have romantic connotation. By way of an example, take a look at the picture above. The oddly-scaled hamlet is arrayed around the rocket like Plasticville houses under a Christmas tree. The houses look tiny like they were put together with glue. It's an appealing image for people who grew up with toys like that.

Come to think of it, look at the picture of the spaceship interior (above, right). It's loaded with gizmos. Every boy in that era had a fantasy that he was the master of high technology and could use it as no other generation had before to explore the universe. Wood took that fantasy and expanded on it. He validated what we felt and cheered us on. 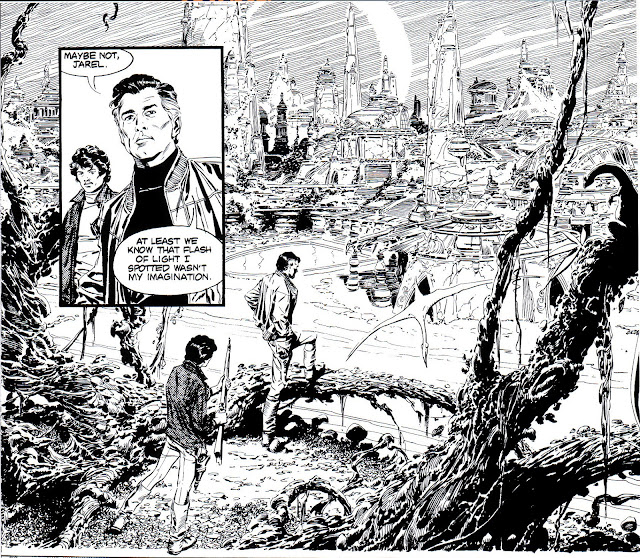 Maybe at this point you're thinking, "So what? All the sci-fi artists of that time did that." Well no, not really. For contrast I thought I'd put up this impressive panel by Wood's friend, Al Williamson. It's a terrific drawing, but it's...well...generic. The architecture isn't caricatured and no point of view is expressed. It illustrates the story and nothing more. And the characters...they're just well-drawn standards. 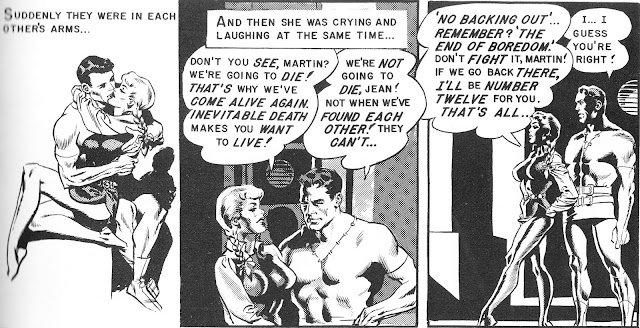 There's nothing standard about Wood's EC characters (above). They're iconic, but that's not the same thing. There's not much acting in these poses, but a great deal of attention is given to the mythic, timeless qualities the characters are trying to project.

BYW: Animation Resources recently put up some great scans of EC horror covers. You can see them at:  http://animationresources.org/?p=6882
Posted by Eddie Fitzgerald at 12:00 AM

I love Ray Bradbury. Didn't know Wally Wood illustrated some of his stories for him. With compositions like this, it makes my own drawings look like third rate crap.

Scrawny posted a bunch of drawings on his blog. Check out the post here if you wanted a better sample of my work. I'm still 17 and I can already draw like this and as I said before, Vincent and John offered me a ton of great advice a long while ago, even calling me a great promise. I wanna get better at composition and making more asymmetrical poses, kind of like in your drawings. I tend to reuse old ones sometimes, despite drawing from tons and tons of movies and drawing the people in them.

Do you think I'm truly talented or do I just have a bunch of mistakes here? I've never focused on having a style and just draw whatever comes to my own head as a result of doing hours and hours of countless drawing studies from everything I can think of (Warner cartoons, UPA, 40s and 50s Disney, Sword in the Stone, Jim Tyer, Milt Gross, Jack Bradbury, Scribner, McKimson, Dan Gordon, and a billion different artists over the years). For me, I just never thought of any of my drawings as being too significant compared to yours, so you be the judge. Is there even a hint of an individual style in these drawings? I need some honest drawing advice.

Roberto: The drawings are great... lots of energy and cartoony fun. If I were you I'd brush ink some of them and see what happens.

Probably the inks'll drain the energy and fun out of the drawing, but using trial and error you'll figure out how to put them back in.

Thanks for the good advice, Eddie. That will keep me motivated to keep practicing and to see if I could get these published into a student publication next year. If I still had my Moleskines, I can show you what I can do with a brush pen and stuff. Those look even more incredible than my crappy ballpoint pen doodles. Always wanted to ink, but I don't have that bottled India Ink stuff or proper Bristol board, but this summer, I'll get some blue Col-erase pencils and try that out.

Hopefully I might still get into storyboarding. I seem to have a knack for staging and posing, but I just don't like my handwriting as much.

I got my copy of the Wally Wood book today. Wow!