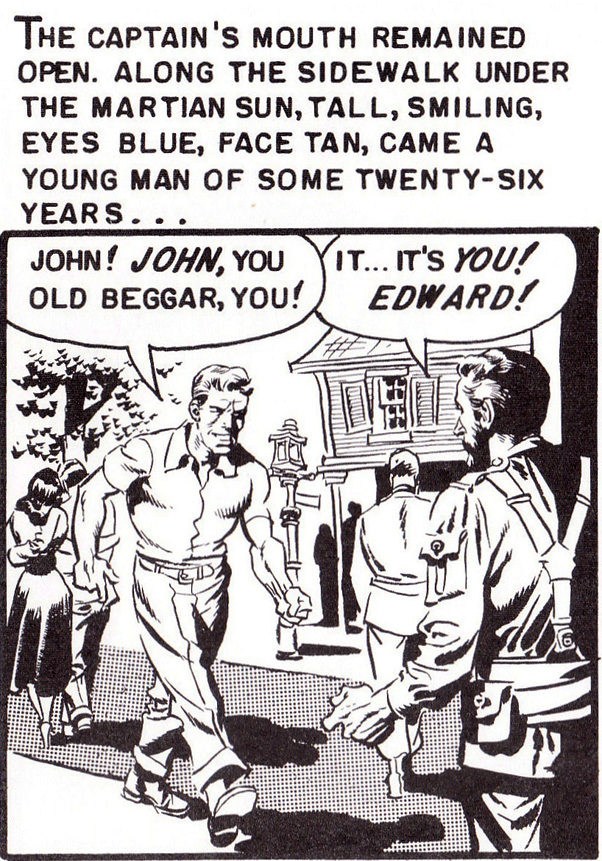 Wow! Wally Wood: the man deservedly called the king of science fiction comic book artists! I thought it might be fun to take a few panels and examine them closely to see if we can figure out what the Wood Magic consists of.

Here's (above) a panel from a Weird Science story by Ray Bradbury: "Mars is Heaven," Look at the cartoony walk on the Edward character. Wood had the amazing ability to be cartoony and serious at the same time. And the poses...I wouldn't say they were especially nuanced or well acted...but they're just right. How come? What is Wood doing here? This is worth discussing and I'll try to devote a whole post to it later on. 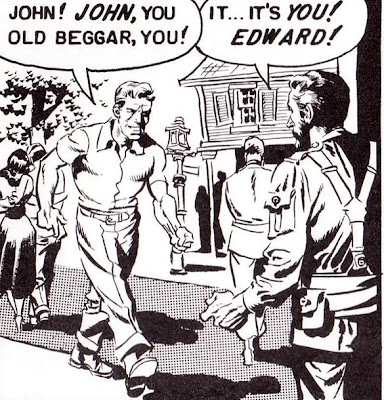 Back to the panel: right away you see that the perspective is off kilter. The viewer's eye seems to be at Edward's belt line, so all the belts worn by characters of the same size should be the same height...but they're not. The foreground character named John should be bigger and taller in the frame, but...he's not either.

Is this a serious problem? Not in the least. It allows Wood to fill the panel with characters that are simultaneously distant and close at the same time. It gives him the ability to have that cluttered look that fans like, and still let the composition breathe. It's great ! 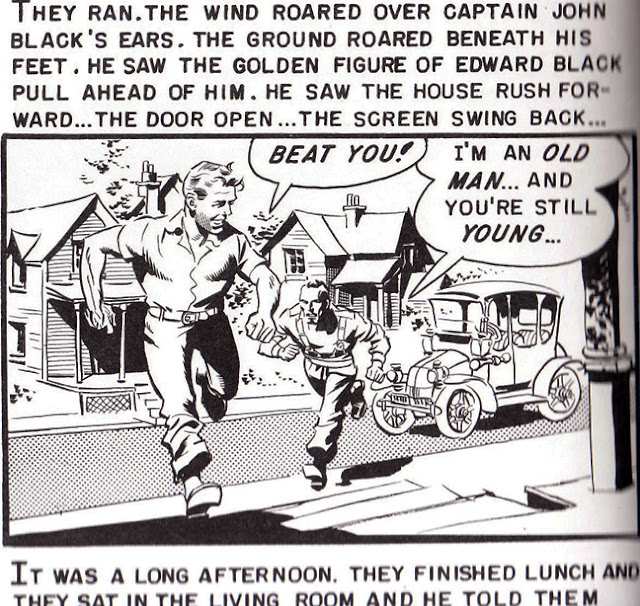 Here's (above) some more cartoony poses. To judge from the human figures the viewer's eye is at knee level, yet the porch across the street is shown on a downshot. How do you like the way the foreground stairs are cheated? How do you like the steps across the street that spill over onto the tarmac? Look how tiny the houses are. Does it work? Of course it does! It's wonderful! 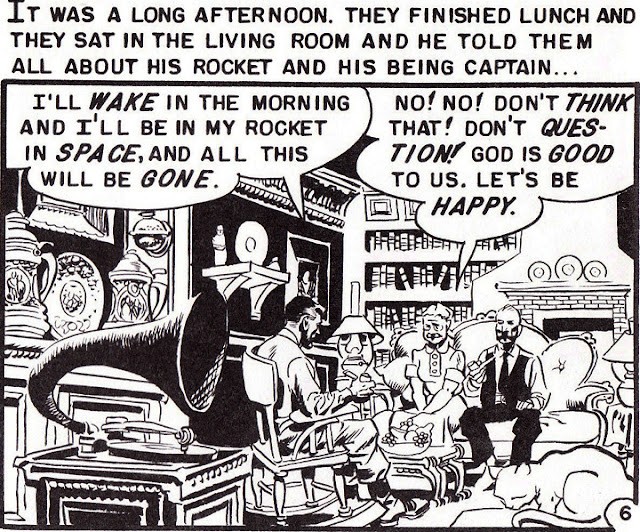 I love the way Wood is obsessed with clutter. Did he pick that up from Kurtzman and  Jack Davis, or did it have some other origin?

Here's (above) the same panel minus the top caption and word balloons. Now the clutter really reads! Geez, it's like an an explosion in a black string factory. So how come it all holds together?  The small amount of white space on the right helps, but that's not enough for balance. What is the hidden factor that makes this panel work so well on the page?
For the answer, look at the panel preceding this one, the one that contains the word balloons and top caption...Wood needs more blank white space and he steals it from the word balloons! Even the formal lettering in the balloons seems to make a nice contrast. In other words, he uses the word balloons, which were probably lettered by someone else, as a structural element.  Is that cool, or what?
Okay, we haven't laid bare Wood's deepest secrets here, but it's been fun thinking about it. Geez, you could do a whole post just on the calligraphy of his line.
Posted by Eddie Fitzgerald at 12:17 AM

I would kill to be able to draw this realistic and funny at the same time! I've never studied from Wally Wood before so maybe this summer when I'm not working at McDonald's, Kroger or Chick-fil-A (trying to apply for a job there) and have all my college stuff ready, I can get some art supplies and copy some of these panels. Sweet!

Thanks Eddie. Do you mind if I emailed some of my own drawings to you? I noticed that I've never really shared any of them with you, though John and Vincent loved them when they gave me advice a long while ago.

Anonymous said...
This comment has been removed by the author.
2:05 AM

Joshua Marchant (Scrawnycartoons) said...
This comment has been removed by the author.
2:07 AM

You probably know these already, but here's another side of Wood, the parodist. His versions of Li'l Abner and Pogo are uncannily like the originals!

Stephen: Haw! Many, many thanks for these! I do have print copies already, but it's nice to have digital ones.

Roberto: I'd love to see the doodle, but it would be better if you got it published on the net and sent me a link. You should have a blog just for situations like this, even if you don't intend to keep it up.

Uncle Eddie:
I pause to ponder:
How much wood in the woodwork would work
If that wood is worked up by Wood?

It's late.
I'm tired.
Have you seen this?

Hey Eddie. Finally got the doodle up. I'm going to send some to Joshua so he can post them on his blog so you can see some more.

Norman: Wow! Thanks! Some nice Wood there, though the file sizes are on the small side.

Roberto: Haw! The way the hair hangs out of the manhole-size nostrils is great!