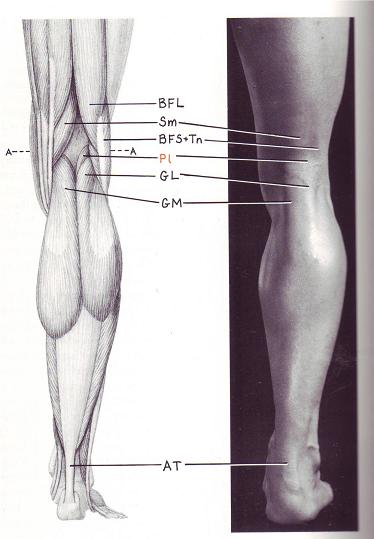 I wish I could recommend a book of anatomy for artists but I can't. There are a few passable books on the subject but no great ones. Some of the manga books are good for cartoony girls' anatomy, some of the older books are good for illustration reference, but no book I know of discusses the human body the way it really is.

Where a lot of books fail is that they rely on simplified muscle charts like the one above. Nobody has a split calf like the one in the drawing above. I'm sure the drawing is accurate but in real life some additional muscles, ligaments or fat must cover the two parts of the calf and make them seem like one.

Look at the drawing of the sternomastoid muscles on the left, above. According to the drawing charts they form a big "V" in the neck. You can only see half of them here but you know what I mean.

Now look at the photo on the right (above). The "V" is clear enough when the neck is normal but when it's strained as it is in the picture, or the face grimaces, the V becomes an "A." That's because muscles the drawing doesn't show cover the sternomastoid and they also have an influence on the way the neck looks. The muscle charts are incomplete. They leave out muscles just to have a tidy drawing. 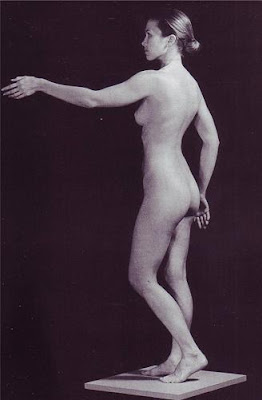 Before I leave the subject here's a couple of photos (above) to prove that most people have long torsos in relation to their legs. You could almost say that long legs are an invention of artists. 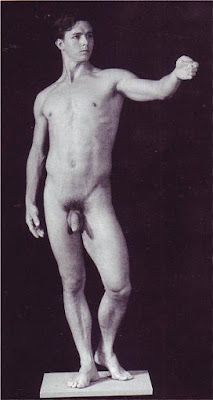 My guess is that less than 20% of adults have long legs. A lot of women who appear to have long legs seem that way because they're wearing heels. Or maybe they have long legs but even longer torsos.
Do you disagree?

Posted by Eddie Fitzgerald at 9:56 PM

Was that last pic really nessecary?

There are some weird/gross people on your blog, Eddie.

I agree, most people have normal to long torsos. I don't! I'm 5'7" and when I sit down next to a 4'5"-5' people we are at eye level almost (especially with my bad posture). That is because I have a short torso and long legs. I like my proportions. The end.

i have a long torso and average sized legs. it depends on the person. a lot of super tall people have long legs. Black people especialy those native to africa and or those in warm climates (near the equator) have longer limbs and are more lean, those in colder climates are usually stout, bulkier and barrel chested, hairier, etc. etc. apapting to the environment. height is also relative to diet as well. It's just genetics.

Is that last picture a young Mike Fontanelli?

There are loads of women with short/high waists. Just saying(and I believe you're really talking about the female form, not men, yes?) : )

Kali: there are weird/gross people among cartoonists, in DROVES. You really do have to be careful out on the internets and in RL, too. : (

Baby Cakes likes your blog. Except far the parts where mens thingyees are out.Baby Cakes would like to go all the way with a girl with her skin off. Slippery nippery fun.

Granted, their are a grand slew of anatomy books available, & they can greatly vary on quality and/ or illustration reference (my personal favorites are the books written and Illustrated by Burne Hogarth, Dynamic Anatomy or Dynamic Hands are such examples) but if someone were going to make a book about how the human body really is, then it might as well be a 500 volume encyclopedia, because the design of the human body, despite being similar in design, can also greatly vary in body build.

Take, for example, an average fat guy. He could have more chins than china town, or the fat can be toned muscle, but otherwise could equally be flabby, and another can have folds of fat on the back of the neck, or maybe have one chin and one convex bulge on their neck, and so on.

Otherwise, I have to agree. There really is no excuse for NOT having a reference book or notes available to the public on how the human body really is.

Also, it’s actually interesting that most illustrators, who would sit in a life drawing class, would accidently draw a human with long legs, because a long legged person is a rare occurrence. I should know, half of the class, me included, would fall into that habit by mistake.

For myself, I’m 6ft, 1in tall, and have a lean muscular build, so if I had to sit down by someone who was taller in height, than he/she would just equal my eye level, no question.

The George Bridgman books are good, esp. "The Human Machine"

Why are people making a big deal about that last pick? It's much more tasteful than other models I have seen in my life drawing sessions.

Be thankful he didn't post any 80 yr. old, morbidly obese guy with stomach acne like I had to bare witness too in my class. I needed laser eye surgery after my corneas cracked from that wonderful traveling freakshow.

Phil: I know what you mean, but it was the picture that best made the point about the torso.

Pappy: I never found Bridgeman much use for my kind of drawing, but when I tried sculpture I found him indispencible.

I dunno if I agree long torsos are the majority, rather just another common variation. The image of Mendels Pea Plants having a group of children plants, some of which are tall, or short, come to mind. I had a daddy long legs, and mommy short legs, and got the relatively long torso. I was taller than dad, yet his hips were higher than mine.

There is a common problem in anatomy art guides, especially leaning towards cartooning, as idealizing and standardizing rules of thumb for proportion, that do not reflect the actual variation in the population.

I have heard people rag oh Hogarth for actually being a bit dogmatic while he was actually a bit inaccurate, a bit hyperdetailed actually, beyond the way people really are. Although that can be very good for construction. Did it harm or help someone like, I dunno, Gil Kane, to get so connected to the connective tissue that way?

Too bad the Andrew Loomis books are out of print.

i think people who are afraid of pictures of naked man are gay and don't know it. I just don't care...and hope mom doesn't catch me looking at it.

Hogarth anatomy books are at least good to look at.

Actually, you can fins (and DOWNLOAD) all the Andrew Loomis books HERE:

And there are some Walter Foster books currently available that excerpt a lot of good material from several Loomis books. They're cheap, too.

Joe: I couldn't find any downloads at that site, just links to places that sold the books.

just type in loomis torrent into google and you should find it. I downloaded all the loomis books awhile ago they arent that hard to find.

Theres good advice, solid fundamentals etc. but I find the method he wants you to ultimately follow comically technical. It makes the construction guides in the preston blair books look like a dick and jane reader

Hey Eddie - Here's a spot that has Loomis downloads in PDF and other art books as well.
http://basangpanaginip.blogspot.com/
2006/01/downloads.html

I can`t believe the the books writen by andrew loomis are out of print there, in Buenos Aires where I live you can buy his books (in spanish of course) for about 14 dollars,
I studied anatomy with his book "draw of the figure" (rough translation of spanish title) and he always describes that the proportions used by him are based in idealized proportion of tall men and women. and about women ,also he said that it was assumed those proportions would look somehow "long" , but his book was intended for a comercial use of arts, because at that time there was a demand for artist in the publicity medium ,or that kind of things .And to say even more in one of the first pages, the reason for the use of different proportions is explained ,... this is a very interesting theme,one of reasons why the lenght of the torso variates from one to another person,is simply because some people loose height because of bad postures , and the bend of the back,and also flaccid belly and fat buttocks can produce a visual effect , that induces the idea of having a longer torso ,and one important thing is , when you look a figure drawn in a book , perspective cant affect it , while , if you are looking at someone , the perspective always afect the perseption of shape sightly ,and ,of course , the sise of the head is does not change much with height ,this is why someone that is more that 2m. tall would have a proportion of 9 heads...

Regarding the last two model shots, the elevation of the camera can drastically affect the proportions captured in the photograph unless the picture is taken at a great distance. If you learn to draw these proportions, you are you are learning also to draw from this focal length, and with your eye at this elevation. This is something photographers must be aware of while only the most skilled illustrators learn to make acurate compensations.

Isaac Asimov claims that most adults have similar length of torso and therefore the difference between our heights is mostly a matter of variance in leg length. I'm not sure I buy that. Asimov's anatomy book "The Human Body" is usesless for artists and has very little illustration.