MORE ABOUT THE YOUNG BOB CLAMPETT 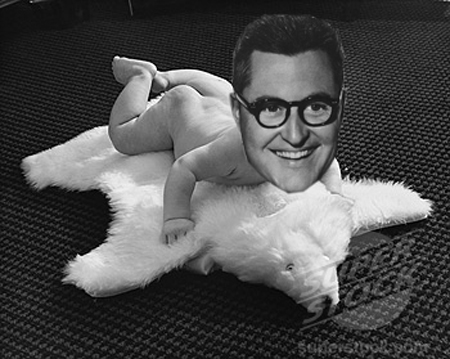 This excerpt from Bob Clampett's audio taped biography is a swipe from "Beany and Cecil's Official Site," linked to below. Refer to that site for coryright info. My heavily-edited excerpt is just a teaser. To read the whole fascinating article be sure to click on the link at the bottom.


MILTON GRAY:  Hi, this is Milton Gray.  The oral history you are about to hear was actually edited together from several different taped interviews, done mostly in the 1970s.  The audio quality varies widely, from one recording to another, since none of these were intended to be heard as recordings.
Bob Clampett was born on May 8, 1913.  And here, to tell us the rest, in his own words, is Bob Clampett.


I, very early, was drawing comic strips -- I would be doing the characters of Happy Hooligan, or Boob McNutt, or Jiggs and Maggie, and so forth.  I would actually learn to draw those characters.  And then I would take whatever the Sunday paper was, where it ended after, say, twelve frames, I  would then start making new frames in which I would carry on the characters doing a continuation of the story, and so forth, and I would go on for maybe a great number of frames, and so I was actually writing original material, and putting the characters through new things. 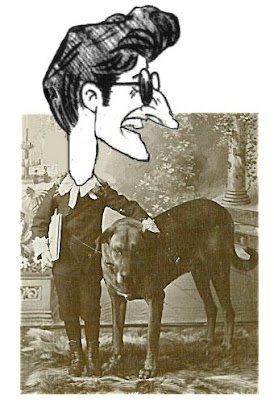 For different years I was emulating different styles of cartoonists -- one year it was Pat Sullivan's Felix, and another year it was Milt Gross, and at other times other people.  But I got Milt Gross down to where I could draw Nize Baby and Mr. Feetlebaum and Louie Dot Dope very well.  And then the kids started coming to me, and they were paying me what was then a very big amount, I think it was fifty cents to a dollar, to make drawings on their sweatshirts, or on their yellow raincoats.  If you see some of those early John Held Jr. drawings of college boys wearing slickers, and they've got things drawn or painted -- you know, wording all over their car, their Tin Lizzie, or over their raincoat -- that's what I was doing, and they were paying me to do this. 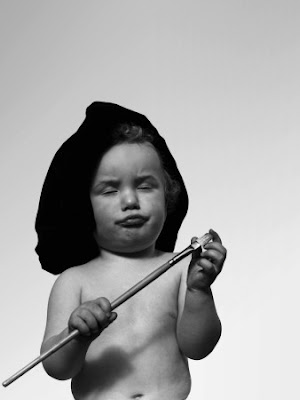 When I was twelve I had some cartoons published in the L.A. Times -- colored pages of a pussy cat and so forth -- and Hearst saw it.  He was real big, he used to look for future comic strip artists.  So they offered me a contract, for $75 a week when I got out of school.  Then I went down every Saturday to the Examiner and worked in the Art Department.


You know Robert Day of the New Yorker?  He was there, and Webb Smith who became one of Disney's original great story men, the one that's credited for that first Pluto sequence, he was there.  And I was there with these wonderful newspaper artists, and they'd show me how to do it, y'know.  And then the Examiner paid my way to Otis Art School, and they would every so often publish one of my drawings in the paper, to encourage me. 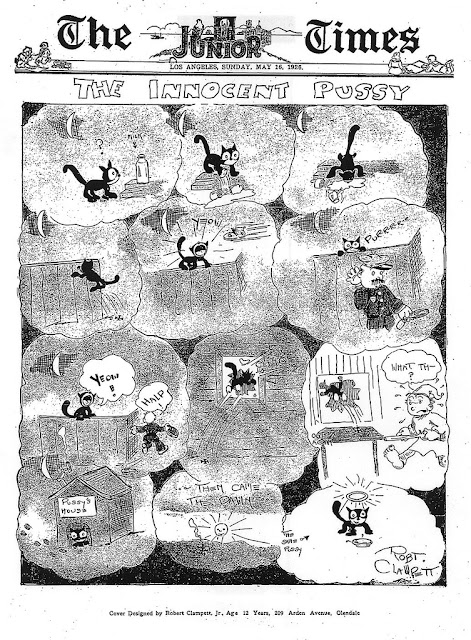 Originally, I had a contract to go to be a newspaper cartoonist for King Features when I got out of high school.  My dad had that contract for several years.  Now when sound came in, and Disney's came out with the first Mickey Mouse, suddenly all the things that I wanted, hoped to do at some point in my life, seemed to all merge together, y'know?  Making comedies for theaters -- doing some voices -- drawing -- writing -- directing -- all the things that I tried to do in isolated instances as a kid all seemed to come together.  So I got so excited about it that I insisted on trying to get out of the Hearst contract -- $75 a week was the starting salary -- and go to work in a cartoon studio, for $10 a week.
Now my uncles were very good business men, and when I told them I'd rather do this, they said, "You're crazy, because animated cartoons will be just kind of a passing novelty."  But in spite of all the advice, I made the move, I told Walt I wanted to get into animation when I got out of school.  He says fine, and he gave me some of the comic strips, the first Mickey Mouse comic strips to work from, and some other sketches.  And I worked on Mickey Mouse, and so I was expecting to go to work for Walt.  But right at the time I got out of school, and I said, "Okay, I'm ready," they were at that time building -- they had animators working across the street, across Hyperion there in garages, and in apartments, I think.  They said, "Gee, we have no room, we're building on this annex, it'll take a month or so, and when we do that there's plenty of room and you're with us." And you know how it is when you get out of school, you think, "Wow, two months seems like a lifetime," y'know?  At that very moment I got the idea to go over to Warners.  I took my sketches and so forth ....
That's the end of my swipe from the Beany and Cecil site. There are four installments of the Clampett story on that site, with several more on the way.This has been an excerpt from installment number four.
The site...

...and, while I'm at it, here's a link to an article Milt wrote about building cartoon web sites:

Wow, more insight into Bob's history. The more i learn about this guy, the more i like him! What's his family like? I'm sure theyre nice like he was.

I knew Clampett was a big comic fan, but i never knew he actually tried to publish his own series!

I also think he was really smart in experimenting with multiple styles, as well as writing his own new stories for the characters--a great way to give your creative brain a workout by making new stories while keeping everyone in character. Maybe i should try that!

By the way Eddie, i'm sorry that i've been butting in off topic questions in your replies where they don't belong in previous posts. I figure thats annoying to you, hence why you havent replied back to me. I've just been wanting somebody to look at my drawings on my blog, but if you really hate it, i will stop it.

Wow, and like that history was changed! Clampett's cartoons are as much of a riot today as they were back then. To be able to create comedy that's as seemingly timeless as those shorts is an extremely hard feat. Just goes to show with the right guys (Clampett, Scribner, McKimson, Melendez, etc) anything is possible.

By the way, just recently I was listening to you speak about Bob on the 'Looney Tunes' Golden Collection ('Draftee Daffy') with John and the stories you told were great! I love when you do audio commentaries like those on the 'Looney Tunes' golden collection and the 'Ren & Stimpy' DVDs as well! Oh thank you on your work on Ren & Stimpy, which turned 20 a couple of days ago. I'm sure it wouldn't have been the same without your input!

I can't say enough good things about that Beany and Cecil website. That article on building a cartoon website seems worth a look.

For anyone interested here's an extremely long interview with Clampett
http://www.michaelbarrier.com/Funnyworld/Clampett/interview_bob_clampett.htm

Read it (if you have the time!)

Yay!! Clampett is God; what else is there to say?

We need more tributes to him! There should be a published biography - plus a coffee table art book, a feature-length documentary, a marble statue, a ticker-tape parade, a national holiday - and a sandwhich named after him at Lindy's. Immigrants applying for citizenship should have to recite dialogue from Piggy Bank Robbery by heart, and the Pledge of Allegiance should end with: "I'm comin', Beany Boy!", (followed by a Peter Lorre fish who says: "Now I've seen everything!", and blows his brains out!)

@SparkyMK3: I've met the Clampett family, and they're all as nice as could be imagined, especially Ruth.

Damiano: Credit for Ren and Stimpy goes to John K, not to me. That was John's baby.

Sparky: I went to your blog when you asked. The classic animation you sampled was good but pretty straightforward IMHO, and I didn't know what to say about it.

Mike: Haw! Yes, all those Clampett tributes should be written into law!

I wonder what would have happened if Bob Clampett went to animate at Disney. What his output would have been like. Would he have broken the conservative Disney mold? Could he have lead the company onto greener pastures as a Director? I think we would have lost out if he didn't end up at termite terrace.

I wish Warner Bros would release a collection of all his cartoons in high definition.

SparkyMK3, I went looked, and replied (commented on your Felix comic). Disclaimer: I'm not a very good artist. I pointed you to things that have helped me "see better" and how to plan my art. They are great supplements to John K's blog from my experience.