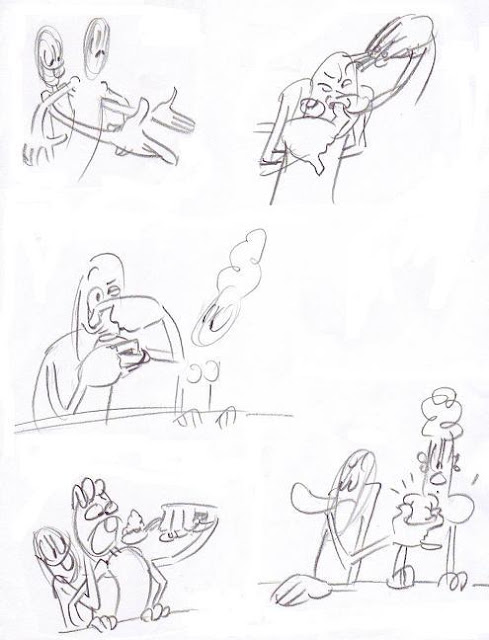 The problem with animation writers, one of the many problems, is that they don't write visually. For them visual writing means lots of chases or excuses for fast cuts. When I think of visual writing I think of schtick.

Schtick has a lot to do with funny acting and funny situations. It's about small things, like the inability to find the sleeve of the jacket you're putting on.  Or maybe your guy drops his wedding ring into the soup of the bully sitting beside him and has to fish it out with his fingers without the bully noticing. Small stuff like that.

Schtick is great, and animation is tailor-made for it, but it takes some skill to integrate it into a larger plot and most writers don't want to be bothered.

In the sketches above (which are hard to interpret...forgive me, I'm too sleepy to redraw them for clarity) I tried to imagine what kind of schtick a man without control over his arms and hands would do. Imagine putting your arms behind your back and letting a friend substitute with his arms. If he was well-intentioned he could try to make his gestures fit what you're saying but it would be off somehow...somehow out of sync and wrong...but funny in a strange way. Now imagine what your own arms would be like if they were naturally independent like that, without the aid of a friend.

Imagine what it'd be like if your arms had a mind of their own. While you're talking to friends the hand might become bored and squeeze your face, or they might squeeze the girl next to you. There's no telling what mischief they could get into.

Or maybe it's played more subtle than that. Maybe you underplay it so the audience senses something's out of whack but they can't put their finger on it. Anyway, you see what I mean. Schtick is fun.


Posted by Eddie Fitzgerald at 9:30 AM

Glad to see that i'm not the only one that is annoyed by that cartoon (and a lot of other Disney cartoons by the way). Watching that, or similar cartoons, i aways end up feeling uneasy and frustrated.

Schtick is king! I just posted the beginning of a little scene I'm animating that is just what you're talking about.

Oh yeah, I saw pictures of you at the Basil Wolverton show. There's another show opening tonight in the Fullerton area if you care to come back. It's the opening of the JC Leyendecker show at Fullerton Museum. Information is HERE.

Soup is hilarious. When you started commenting on it I recalled Chaplin's great soups. My fave being in Modern Times with the bully and the bread.

Schtick is also like achacter expressions too, isn't it? Some ritzy swinger waiting for a lady at a bar will preen himself, check himself in a reflection on the bar or a morror behind the drinks. Maybe even attract the attention of a goose necked guy with a big nose and wild glasses. and that guy with the glasses will schtick up differently.

So the gag rests on the type of character. It is also about how good the artist can put it over--like your Pluto versus the Clampet dog comment.

Schtick seems like something that would come of kismet. Well, not really kismet. I mean that it would come from an exploration of the character, the scene, and other geven circumstances. So how do you write for it? Better yet, how do you budget for it? Where does it go in the animatic that gets made these days?

I'm on a project where I need some schtick to sell to my director. So I'm real glad you brought this up, Uncle Eddie. THAT! is kismet.

PS--apologies for the typos, I'm about to go to sleep.

Haha! The friend substituting their arms schtick is one of the rounds on Whose Line Is It Anyway called "helping hands"! It's definitely funny watching the arms try to fit the dialogue. There's also an added comedy level with the friend not being able to see what you're looking at; the arms may have a mind of their own, but they have to blindly grope around to find whatever it is you can see directly in front of you.

You're totally right. People eating is a situation with great comedic potential. There's a betty boop cartoon (not dizzy dishes) that i like in which she cooks in a wagon restaurant thing. I think it's called Bizzy Bee.

For dramatic/live action writing, you pretty much have to set the actors up and get out of their way. Shakespeare has very few stage directions yet very evocative dialogue that opens up immense possibilites for a comic player.

Same with Moliere. Moliere was inspired by commedia del'larte (the standard character types are present in all of his plays) so it's no surprise that schtick integrates well into his plays.

I've never written for animation, but I imagine that if I would be inclined to set up a situation with comic possibilities, and get out of the animator's way. Sort of how I imagine all those old Goofy "How To ..." shorts were written.

"Funny images like that are a great nucleus to build a funny story around."

Hmm. What comes first -- the story or the schtick?

Eddie: Speaking of schtick, I would like to invite to Write Act Rep's production of "A Midsummer Night's Dream." I know you appreciate a good show! I play one of the mechanicals, and my wife plays Peasblossom and choreographed the fairy dances (There's a YouTube "commercial" on my blog). Did I mention sexy dancing girls in bodysuits? Very cultural, I assure you.

Is shtick still really possible in cartoons, when one is sending all the actual animation overseas?

Chris: Thanks for the tip about the Leyendecker exhibit! I'll try to see it!

Micah: Kismet? Aaaargh! I'll have to look that up!

Max: I always write around the nucleus of a funny image. You know you've got something when the core is so appealing that you end up adding to it just for fun, even when you'r supposed to be doing something else.

Hi Eddy, you should watch Evil Dead 2. Bruce Campbell is a master of acting like he's not in control of his body.

There's also an episode of Xena that he was in where Xena's spirit is inside his body, so he doesn't have full control of himself. It's really funny. That episode is called ''the quest''. There might be some clips of it on youtube.

...Imagine what it'd be like if it had a mind of its own.

I am reminded of Steve Martin in THE MAN WITH TWO BRAINS.

Great post. I think you just explained the whole idea of writers shouldn't write cartoons in a clearer fashion than John did on his blog.

Gabriel, Ollie: I know the scene you mean! Evil Dead 2 is one of my favorite horror films!

Mr. Bean? I love Mr. Bean! His most recent film was better than the previous one but it's the TV stuff that he'll be remembered for!

It's darn near impossible to write visual comedy. The greatest comedy comes not from the action itself, but from the set up, reactions and the timing. The best writers can think visually and can put that information in words. But even with that

Brian: The end of your comment was cut off somehow, but I think I get what you're saying. Visual comedy is indeed hard to write in script format. That's one reason I believe in the unit system where the writer (if there is a writer) reports to the director. That way the story reflects what the director and his artists actually have enthusiasm for and can execute well.