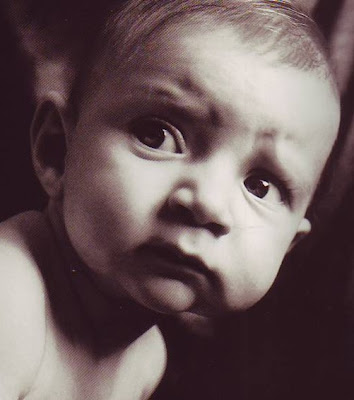 Have you ever noticed that babies have an expressive furrow above their eyebrows? 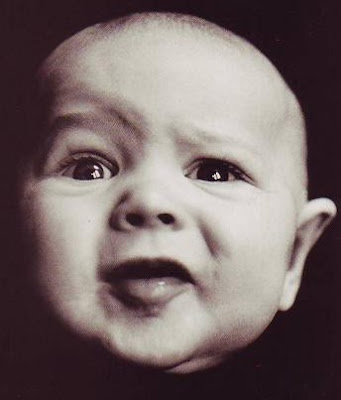 It's not the result of a bulging skull. Here (above) you can see the furrow moves independently of the skull. It seems to be brought about by a muscle that's much more subtle in adults. 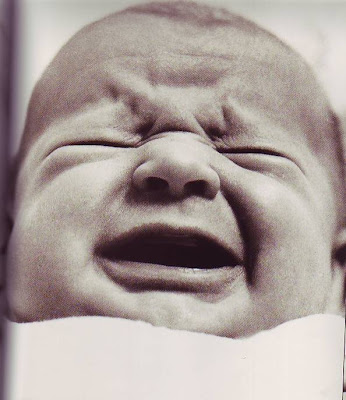 My guess is that the furrow exists to make crying expressions read better. Nature really wants us to pay attention to crying infants. 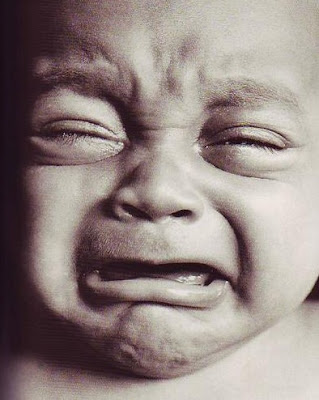 Babies cry a lot broader than adults. They put their whole face into it. This (above) is an interesting picture. Look at the way the baby's chin is tucked up under his lip and the way the lip covers it. 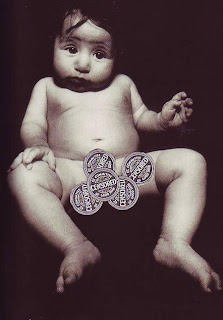 Why on Earth do babies have such big sex organs? 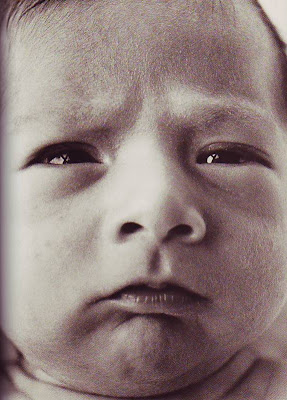 And why are their chins and lower jaws so small? You don't see any babies with Katherine Hepburn chins.

You're damn straight. I have a ten month old daughter and it is...HIGHLY PREVALENT to be certain. Babies are like tiny living cartoons.

Not only are their faces very readable, but they are amazingly good at reading your face at a surprisingly early date. A nearly-newborn infant in a room full of blinking lights and high-tech doo-dads will invariably focus its attention on the human faces in the room. Nature wants good communication here, long before we're old enough speak or understand a language of words.

And why are their chins and lower jaws so small?

I can't say for certain. But our prenatal class instructor said that this was to make it easier for newborns to nurse. It makes for a good fit!

And why are they so hard to draw?

Hey Eddie, it was great to meet you. I think I'm gonna write a post on acting and reference a lot of stuff you mentioned. Would that be okay with you? I promise to give you an agent's percentage, as well as a manager's percentage of all the money I make off of it!

Babies cry a lot broader than adults. They put their whole face into it.

Actually, the real reason that a baby's cry is so broad and loud is the diaphragm lining the rib cage. Babies and small infants have the ability to project a high volume cry using all their lung power without straining their throat. We lose this abiliy quickly somewhere during childhood.

The reason I know this is because my sister studied some acting in university. She brought this bit of information home and also noted that actors do many excercises to regain that ability they had as babies.

I want to see baby Uncle Eddie! Do you have photos?

Katz: It was great meeting you and...Drat! I'm so bad with names...Mike? It was fun to draw with other cartoonists.

You're welcome to use those acting theories any way you want. I'll be posting on that subject soon but don't let that deter you from any post of your own that you might have in mind.

Katie: Ha! if I come across my baby pictures I'll post them. People can dupe them and use them as weed killer. I have a great picture that John drew of the baby Ralph. I used to have it on my wall at Spumco.

I found a baby picture of you Eddie!

Max: Hah! That could have been me, alright!

It's Chris, Eddie. And my broad browed friend was Sean.

Chris: I remembered your name, I just stupidly forgot Sean's name. I didn't use your name here
because I recently resolved to respect the internet name people choose for themselves, even when I know their real names.

these are funny baby expressions

The jaws are small to accommodate squeezing through the birth canal. After all, a large jaw and teeth are not needed until later.

Now, explain why we draw young kids with football shaped heads. See the baby in "Family Guy" for example. I know it "WORKS" but why does it work? Does it have anything to do with the small jaw?

Love your site. I have to get an ID insted of lurk.

What age ws young R Crumb? I'd guess 13-14. just about the time he was crushed by reality.

Babies don't care if they stare. And the person they stare at usually plays back by making funny faces or waving.

Adults don't look at other adults any more. See what happens if you keep eye contact for too long, how the other person reacts.

Ya post baby Eddie pics- I lvoed those ones I saw of you as a little toddler- so adorable!

John draws the ugliest babies ever.

Huh...so that's why all the babies I've seen always look vaguely concerned with whatever's going on around them.

Then again, I could just be inadvertendly frightening babies.

babies are hilarious, I cant help but laugh at how dramatic their faces get when the cry, or laugh. The world wouldn't be half as funny without them.

Regarding the chin and lower jaw comment, I recall from an Cultural Anthropology class that humans--and other animals--are programmed genetically to recognize infants by facial architecture.

Babies have large eyes relative to the size of their head that are usually placed farther apart than normal, and small noses and mouths. This is true in almost all mammals. This is a genetic map programmed into us to elicit nurturing responses.

How do I know this? Because simple smiley faces were shown to groups of people. As soon as the eyes were placed wider apart, larger and/or smaller noses and mouths, the respondents described the faces as "cuter", not surprisingly.

What was more surprising is that when dolls were given to other mammals, ones with faces that exhibited these characteristics were "nurtured" by their animal playmates: they carried the dolls around like babies.

Further, apes that could "speak" with their hands were asked about pictures and drawings of different faces. Apes were able to identify infants at all times....even in species that they had never even seen before. Even fantastical, mythological creatures--when drawn with "baby" architecture to their faces--were identified as infants, and the apes would sign "hold", "cuddle", "cute" and "suckle".

Why are babies' mouths and chins small? Because that is part of an architecture--just like sexual or beauty characteristics--that are biologically designed for us to find them cute, and therefore want to nurture them, furthering the species.

Thanks for interesting article.

Glad to read articles like this. Thanks to author!

Oh, I'd love to see what you looked like as a baby, Unca Eddie.

Anyways, I found this post looking at another post John K. had been doing about caricatured. Under one of those photos, it had the "animation baby" from Tarzan. Interesting subject.

Im impressed. I dont think Ive met anyone who knows as much about this subject as you do. Youre truly well informed and very intelligent. You wrote something that people could understand and made the subject intriguing for everyone. Really, great blog youve got here.