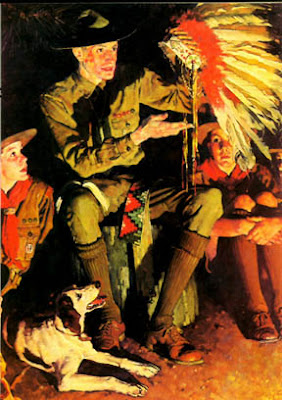 In addition to whatever way the dictionary defines story, a story worth its name is something worth telling and worth listening to. It's so compelling that you just have to tell your friends about it. It's so evocative that it feeds your imagination for weeks or even months after hearing it. Whenever I think about story I imagine indians sitting in rapt attention around a campfire listening to a charismatic storyteller. It seems to me that if a story isn't fit to tell at a campfire then it's just information and belongs in a file cabinet somewhere. It certainly has no place in the entertainment industry.


Imagine trying to tell modern TV animation stories around a campfire, stories like: a little boy tries to pass himself off as something he's not, gets in over his head and learns the value of being himself. A little girl snubs a poor classmate for wearing unfashionable clothes then the poor classmate does a favor for the richer girl and the two become friends. Really, who wants to hear that? Imagine trying to tell stuff like that to a bunch of story-hungry indians. They'd just stare at you. What the indians want to hear is something like: "There I was, backed up against the tree with six drooling wolves moving in for the kill..." You know that's what indians want to hear because that's what everybody wants to hear. Anything else is just wasting our time. 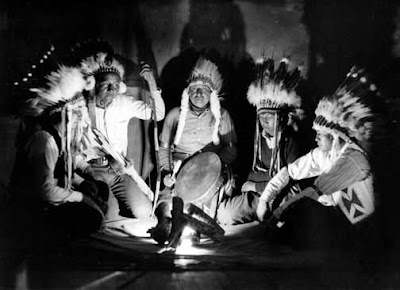 Now I know that cartoon comedy isn't likely to drum up the particular type of excitement generated by viscious wolves but it ought to be an equivalent excitement. Just like the wolf story it should rivet listeners to their seats and should make them want to retell the story to friends. That's the way I felt when I saw John K's shower room sequence in "Naked Beach Frenzy" and Ren's mad scene in "Space Madness." I don't think John would have any problem entertaining indians around a campfire. We need more storytellers like that.
Posted by Eddie Fitzgerald at 8:54 PM

Best campfire scene in a movie: "BLAZING SADDLES." I will never look at beans and buttcracks the same way again!

Do you remember "Commander McBragg"? It was a back segment in Total Television's "Underdog."

The whole series pretty much relied on the "campfire standard"...just without the campfire.

Not the best from Total Television, but it was interesting.

Hmm, you reaise a really good point here Eddie, I never really thought of things that way but it's true, perhaps writers should hire a group of Native Americans with a campfire as consultants. Oh, and I also love Ren's Space Maddness, that's my favorite episode of Ren and Stimpy "Boiled football leather... dooog breath!"

It all started with the PC police demanding the removal of anything perceived violent from cartoons in the late 1960's. That meant eliminating most interesting villains, which got rid of conflict. Try telling an interesting story without conflict. You end up with "free to be you and me" -like drivel. Today we have generations of pseudo creative execs who were actually inspired by the worst crap from the 70's, and they perpetuate the downward cycle.

"Free to be you and me"? What channel are you watching?

When I turn on Nickelodeon on Cartoon Network I sure don't see the sappy "learns to be himself" lesson stories you're thinking of.
They all seem aggressively full of incident, near-death hijinks, all kinds of purely nutty stuff--Fosters, Spongebob, a lot of weirdness for its own sake. Which is the real weakness imho-there's too many of them that are similar in style.
But anyway, they're not anything like Captain Planet or Fat Albert.
Actually, FA was pretty weird too, wasn't it?

So then what happened after they got you against a tree???? Don't leave us hanging!

Anonymous said...
This comment has been removed by a blog administrator.
12:42 PM

Anonymous said...
This comment has been removed by a blog administrator.
1:56 PM

I like your "campfire principle"! I realize that you are talking about "the entertainment industry" but I think it might have a wider application. Just recently I had to tell the plot of Henry James' "The Golden Bowl" to some students who hadn't read it (it was discussed as in an essay we were reading). It actually made a good little yarn! The bad news is that James takes over 500 pages to tell this story.

Yes Eddie. You tell it straight ... "viscious" is good and entirely possible, cartoon or otherwise ... like Billy Wilder's screenwriting rule #2. "Grab em by the the throat and never let go." The entertainment Industry should governed not by the campfire standard Indians of our youth (as so warmly depicted) but an inspirational blend of Sioux and Cheyenne around 1885... Tell a good story or die.

It's been a while Uncle Eddy. Please email me as I would love to talk to you about your availability re: gag writing for fun and profit. ...please.

Yes Eddie. You tell it straight ... "viscious" is good and entirely possible, cartoon or otherwise ... like Billy Wilder's screenwriting rule #2. "Grab em by the the throat and never let go." The entertainment Industry should governed not by the campfire standard Indians of our youth (as so warmly depicted) but an inspirational blend of Sioux and Cheyenne around 1885... Tell a good story or die.

It's been a while Uncle Eddy. Please email me as I would love to talk to you about your availability re: gag writing for fun and profit. ...please.

Robert Altman would have been drummed out of the tribe for his brand of "story".

Remember that time Fat Albert got cornered in the junkyard by that pack of hungry wolves?

Fat Albert told them they were like Summer Vacation...no class.

Eddie you should do a 'campire fire' cartoon' something light with a beginning middle and end :)

I love your "would you pay a dollar to see this" theory, Eddie. I've been hawking it all over the place.

How about a post on directing voice actors, and voice acting in general. Your Billy Bigloaf stuff sounded funny, but I just think you're a funny guy anyway. How's about some advice for the unwashed masses on voice acting?

David: Are you serious? Did those tribes kill a bad storyteller?

Brubaker: Never heard of it.

Lester: You teach literature? Wow! That's an important job, even more so now when so much good stuff has been dropped from curriculums!

My storyboarding teacher used the same analogy and I think it is a GREAT one. I like your added "file cabinet" principle, as well.

Don't know what you thought, but I found the campfire principle to be working full-tilt in the last pirates of the caribbean movie, dead man's chest.

"Lester: You teach literature? Wow! That's an important job, even more so now when so much good stuff has been dropped from curriculums!"

I teach philosophical ideas in literature (also film) and aesthetics. And, yes, it gives me a chance to talk about the great classics and to do the "close reading" that lit and film departments (so I am told) don't do anymore.