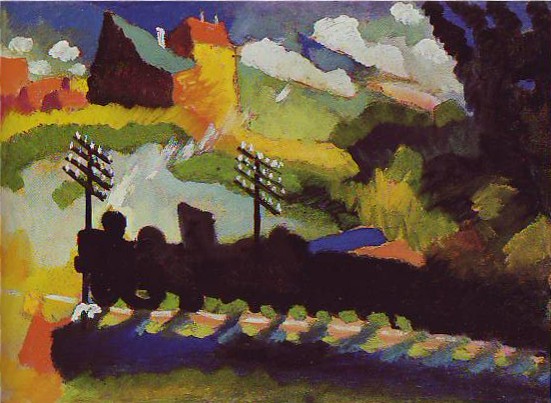 Am I the only person here who likes Kandinsky? He was a Russian painter who was infuenced by fauvism but left the movement when Matisse declared that fauvism was incompatible with abstraction. How do you like this railroad painting? I think he and Gaugain (spelled right?) "owned" green! 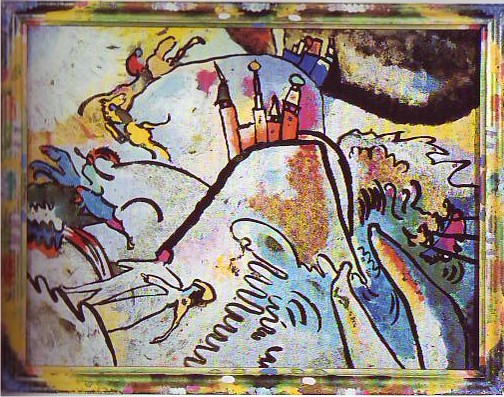 These "Blue Rider" paintings with the colored frames (above) are terrific in my opinion. He sneaks in some white puffballs...more about that later. 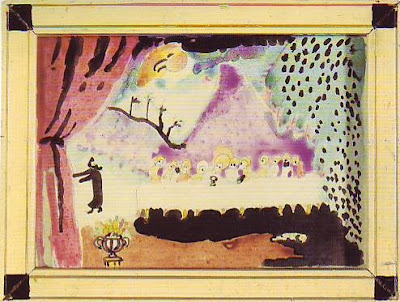 This watercolor (above) looks like a tiny model for a stage set. You can see the Matisse influence but he Russianizes it somehow. 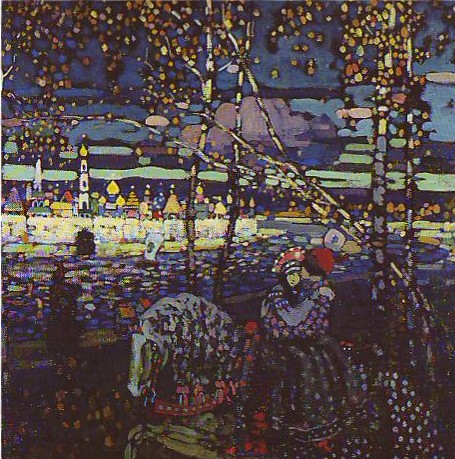 Here's (above) an early example of how Kandinsky adopted pointalism to traditional Russian style. The dabs of paint look like little puffballs. When I first saw them they reminded me of cheesepuffs and I found myself wondering where the Russians ever got the idea of painting on black vevet with junk food. After a moment's reflection I figured that was a pretty superficial observation; the picture obviously referenced balls of lint. It's a pretty picture, though. The dots of light are like stars or fireflies. It makes the whole scene seem magical.
Posted by Eddie Fitzgerald at 9:26 PM

I like Kandinsky, Eddie. Here I thought I was the only animator who looked at Modernist paintings. Most of my colleagues turn their noses up at that stuff. So what, I say! My parents had a book with Picasso prints in it when I was a kid; I guess you could say he was an early influence! I dicovered Kandinsky at art school and liked him immediately, long before I could stomach any of the other "abstract" painters like De Kooning or Pollock. Anyways, love your blog, and John K's too. I read them every day.
I work on boring cartoons. I used to try to put funny stuff in but they always cut it out. The animation industry is not what I thought it would be. I'm going independant, after 7 years as a storyboard artist.
Keep up the cool blog!

That last painting, I have't seen that in years! I painted it when I was in the 7th grade for art class, really badly with acrylics. Thaat painting along with some others are the exceptions in my mind from a lot of those movements. It's too pretty to not like.

These are some great paintings Eddie, I absolutely love Kandinsky, I freaked out when I saw that they had one of his paintings in my local art museum, Paul Klee is also pretty amazing, anyways, keep up the great work on the blog, I read it every day!

Eddie, I too love Kandinsky's fauve-related work, though I have yet to explore most of it. I notice, though, that you didn't post any of his abstractions. Intentional?

Kali, I'm not sure (yet?) that I like the new picture of yourself. So severe!

Kandinsky would have made a really good animation color stylist.His colors are very appealing.

"Kali, I'm not sure (yet?) that I like the new picture of yourself. So severe!"

I love Kandinsky. We had to learn about him in Art History and I've forgotten all of it but I really enjoyed it at the time and he stood out for me among all the others we learned about whose names I've also forgotten.

At least I remembered Kandinsky's name all these years.

I love your point of view on classical fine art as well as animation it is always very refreshing to read your blog Uncle Eddie.

i really like kandinsky's philosophy, his theories are great but i can't like his paintings. Hey Eddie, what do you think of Paul Klee? I think some his stuff is amazing but some is awful, i can't make up my mind. Anyway, i think it's cool that your blog is about such a wide range of art, not just cartoons. Not to mention the non visual art related posts!

Loves me some Kandinsky. The really geometric ones, too.

Max Ward said...
This comment has been removed by a blog administrator.
4:39 PM

Everyone I know loves Kandinsky!

Kali, your new piture is fine, you are a lovely woman and a good cartoonist. Kandinsky rocks the house.

K rocks. I remember seeing film o film doing some brush and ink abstracts from when he was at Bauhaus and it was Krazy to see him pull all these amazing compositions out of his ass. All these shapes and textures i never imagined plopped onto a piece of paper almost as if he were signing his name. In a way i guess he was.

Lester: I like some of the the absractions a lot but Matisse was right. The pictures work better if they're tied to some reality, if only remotely.

Gabriel: Yeah, Klee is great but you're right, he is uneven.

"I like some of the the absractions a lot but Matisse was right. The pictures work better if they're tied to some reality, if only remotely."

This is one reason I reason I keep coming here, Eddie. You say true things (many of which I didn't know before!).

"'Kali, I'm not sure (yet?) that I like the new picture of yourself. So severe!' Severe??? Explain yourself"

Color, smiling --> Black and white, no smile. I admit that this is not deep, but some things aren't!

Eddie gave me grief about it too, I guess I'll have to change it to satisfy the whole.

Can't say I'm a Kandinsky fan, but love your observations on it Eddie. I guess this is where I draw the line on art.