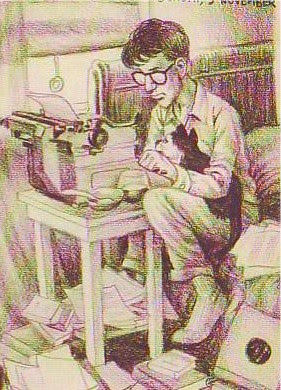 "There are some women...fine featured...a certain texture to the hair, a curve to the ears that sweeps like an eternal nautilus...these women have fingers with the same sensitivity as their feet...and when you touch their knuckles it's like pressing your hands around their knees..and touching this tender, fleshy part of their fingers is the same as brushing your hands around their thighs...and..."

OK, it sounds hokey to us but women eat this stuff up. And if they like it so much, why not give it to them? Consider that one half the world (men) has it in their power to make the other half of the world (women) substantially happier without spending a single cent. What a huge improvement for such a small effort!

I hear you say that that modern women would never fall for something this corny. NOT TRUE!

I've tried this on my family and female friends and it worked 100% of the time! I don't mean I tried to seduce them, just the opposite. I bragged before hand that I could get a reaction from them, whether they liked it or not, with over-the-top purple prose, then I read the dialogue hesitatingly from a dog-eared piece of paper in the presence of other people. Even under these circumstances, even with the most skeptical of women, after only a couple of minutes they were all reduced to shell-shocked puddles. Don't take my word for it, try it yourself and improve the world.
BTW, the picture is by the young Robert Crumb.
Posted by Eddie Fitzgerald at 5:40 PM

You figured us out. Dang it.

When do I get to be read to, Uncle Eddie?

I worship my wife and tell her thus at least twenty times a day with a number of austentatious, alliterative lyric; with some to no effect. In the kitchen one day I call her "deesse" oh-so-casually, and she asks what it means. I tell her it means 'goddess' in french(it does). My wife is immediately on cloud then. She remains there for the rest of the day.

I was happy. But not.

Amazing, and oft-infuriating, how everything boils down to language.

We all love you Uncle Eddie.

that is only how I talk to women. especially tall ones.

True to an extent,

I think it greatly depends on the individual woman though. Some hate compliments. That is why I try to hang out with nothing but confident people as much as possible. But for sane people it always works ;)

Sean Worsham said...
This comment has been removed by the author.
12:21 PM

Since we're on the subject of giving compliments and romance. Here is what happens if we all learn to love each other a little more. A fossiled skeletons of this couple was found embracing each other in a dig in Italy after 5000 years:


Maybe if we learned to give compliments to whom we care about more, we could end up having a friend forever :). My new ambition now is to constantly compliment every person I care about on a more regular basis. If I get married I will take her to this site so we can hold hands and watch a love that lasted eternally.

LOL!!!!
hey Eddie,
will you do a post on cutting theory?

Ahh.
Where would we be without Uncle Eddie?
Raging egos to the right of him, cartoonist goddesses to the left and yet he stands, like the mighty Kauri tree, unmoved amidst the maelstorm.
Where a lesser man would crumble in a heap of quivering fear and lust he remains stalwart. Educating our starved minds and offering out manly tidbits of advice to all who would recieve them.

How do you suggest we break up with women, Uncle Eddie?

I started by letting them down gently. It was my fault, not theirs. They cried, a few hearts broken, but they'd remember me as the one that got a way. They'd love me forever.

Then I started breaking up as mean as possible so they'd hate me and not feel bad we weren't together anymore. I loved them dearly and was an asshole for their sake. They needed to move on.

Recently I'm of the thought that I shouldn't break up with them. We hook up when we meet and it's nothing more than casual. It feels good when we're together, but there is no romance and drama. It's not as epic as my previous affairs.

Help us Uncle Eddie! Your advice brings with it more problems.

Anon: I'm the last person in the world to ask for advice about break-ups. I'd rather adise people how to get together.

Sean Worsham said...
This comment has been removed by the author.
4:15 PM

Ooh, I hope you are not referring to my blogger profile portrait :). This was shot in '04. However I noticed the link I posted up on the forum here wasn't complete so here is the full one, it depicts the fossilized remains of a young couple embracing each other after 5000 years:

(note it's an alternate site w/ the news)

My problem is I want to stay with a woman I love and more importantly one who will love me for who I am. It's hard to find the kind that's around my age, loves cartoons and illustrations and good culture as much as I do (w/ a sense of humor to boot) and a lot of confidence as well.

Maybe it's my portrait, it's good for a snicker or two (No I don't know Mr. Jeremy in real life we just met in a record store one time when I got this pic shot), but I'm guessing it also keeps the women away. I guess I'm going to replace it w/ a cute drawing to show my real sensitive side. Nonetheless keep the great blog work going Eddie, it's great to see a fellow cartoonist who loves life and embraces it despite some of it's downfalls. Too many emos and goths around my world lately who won't look at the bright side of life.

So very true! What also scores big time is embracing tenderly yet passionately our head in your hands while kissing. Instant hit.
It also really helps if you're FUNNY and you have amazing Jazz skills and you compose us a tender love song on the piano and play it to us unexpectedly. Oh and hug like you mean it. lift and twirl as if in a 50's movie if possible.

"I'd rather advise people how to get together."

Well CableClair, (if you don't mind me advising). You're definitely right for the pianist (hahahaha I said pianist). You definitely got the looks to grab his attention but I'd say the best way to keep him would be to find something in common with him. I can imagine you entering a classy jazz bar while he's playing. Sing to the tune of his playing and if it's right things should go good with him. It shows you are interested in what he does and from there keep the conversation interesting. You'll get a wedding ring from him in no time :). In other words keep each other happy! That's my 2 cents.

Cable, Sean: I know of a book that would allow almost any girl to marry almost any man. When I talked to my guy friends about it they all got depressed because they realized how vulnerable they were this type of scientific plan. Out of deference to my fellow men I keep the name of the book a closely guarded secret.

Sean: I remember what the cover looks like but I forget the name. I'll try to find out but don't let the book fall into girls' hands. It would tempt a normal, sweet girl into committing evil.

* claars love rant*
Actually he's a comedian (just wanted to show him off because he's so expressive hahah) turned singer now (singing old 50's stuff with a live Jazz band). And he flirted with me on the street (the odds of running into him while waiting on my bike for a traffic light on the street were very small and a miracle to begin with), especially since he was the first one to say hi) and *he* came up to *me* after his show and casually held out his hand for me to introduce myself.

Hey Eddie, that's "the game" (I'm a girl, in defense of girls they need to know about the title hahah) right? Some of my male friends were having a conversation about it, they have tried it in real life, too and you should have seen my jaw DROP. I had a very primal reaction to it hahaha. I was very HAH. I'm not gonna fall for THAT about it. I kinda wanna read it because I'd LIKE to think that they are wrong and it won't work ALL the time and so I know I can poke THROUGH the game. muahahahah.(watch me fall for it.)

However this book is about picking up women not keeping them ;). Oh well, back to the drawing board. Tell me this isn't the book Eddie.

Uncle Eddie, you are a scream!

cableclair - Way to go, girl! He's quite dishy. I love his smile.

Come to think of it, Uncle Eddie...Ron Jeremy would be a good post for a theory. His career choice is interesting, and his background is even more interesting.

You know when you find out something about someone, and that that little piece of trivia is all you can think of when someone mentions his name or a picture or whatever?

I wish. I wish I could think of something different when I hear his name.

It makes me wonder though if all guys try it, maybe it's just one of those things like you testing out if you can lick your elbow.

Jennifer: I will keep the pic by popular request.

Eddie: Thanks for hinting at the book

CableClair: I hope you get the man you want and as for your question, I think no one said it better than Kevin Smith (see Clerks on their way to the funeral, it will always end up being that answer).

Hey Eddie, I have got to give it to you, you have a really neat bunch of fans on this thing. It's a fun community here. Gleee!! Thanks, all!

ahaha thanks for the clip and advice Sean, thanks Jen!

Eddie, here is the ultimate comment on women and love. Use it wisely, my friend...

"I never saw a dame yet that didn't understand a good slap in the mouth or a slug from a .45" --Bogie from "Play It Again, Sam"