NOTE: IF THE SPACE ABOVE IS BLANK, JUST CLICK ON THE EMPTY SPACE.

With all this talk about typography and movies, it might not be out of line to talk about the trailer (above) for "Mildred Pierce," my favorite 40s melodrama. The trailer is a self-contained work of art, but it's also typical of the high-end trailers of the period, and I thought it might be fun to pick it apart and see what makes the previews of that era so appealing.

As we get into it you'll see that rules of film logic that you clung to til now are repeatedly violated, and with good effect. The violations work! No doubt about it, this trailer will have you re-thinking what you thought you knew about film. 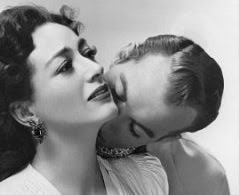 BTW, If this analysis looks familiar, that's because it is...I did this before in July, 2007, but I've had a lot of time to think about it since then, and I think I can do a much, much better job now. If I miss something please let me know.

Well, it starts with a tumultuous fanfare and a title that reads, "WARNER BROS. invite you to witness the first scene of a motion picture the whole world will TALK ABOUT...." [You expect to see the main title 'Mildred Pierce' here but nope, this is just a teaser. The filmmaker is deliberately stimulating a curiosity that he has no intention of satisfying yet.] 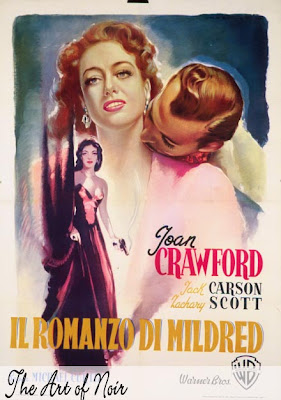 DISSOLVE to gunshots heard in an underlit room at night. BAM! BAM! Cut to a figure falling to the floor as the unseen shooter pumps more bullets into him. With his last, dying breath he says the word..."Mildred."

More quick shots and an announcer says: " 'Mildred'...a name gasped in the night...the one last word of a dying man...but one word that tells a thousand stories of a WOMAN...who left her mark on every man she met." This is the last time we hear the announcer. They only used him for one, long sentense at the start!

[I'll interrupt here to say that I read the novel the film is taken from, and the way Mildred is treated in the trailer is much more sensational and lurid than the way she's treated in the book. In the book she's not a femme fatale, but a hard-working, obsessed mother. But let's not quibble. The trailer sucks you in, that's the important thing.] 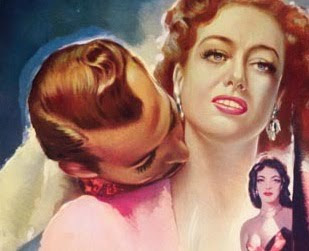 PLAYBOY: "Mildred had more to offer in a glance than most women give in a lifetime."

HUSBAND: "Mildred knew what she wanted and wasn't too particular about how she got it."

SLEAZY BOYFRIEND: "Loving her was like shaking hands with the Devil!" 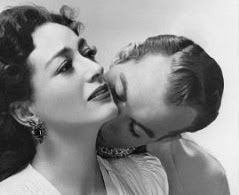 [None of this (above) fits with the tone of the book. I guess the Hollywood wisdom was that a film has to be about somebody interesting, and you relentlessly and single-mindedly sell that person before you do anything else. The plot is totally secondary.] 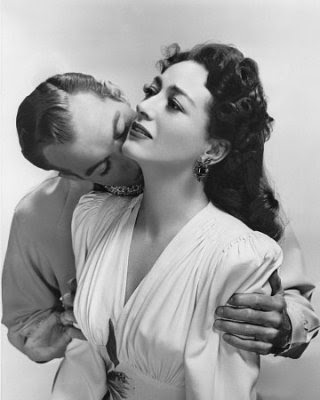 [The music reaches a crescendo, and the trailer seems to want to end here, and it almost does...but wait... the filmmaker hasn't told us about the plot yet. Amazingly, after almost drawing to a close, the film music winds up again and we segway from an exit theme to a sentimental fresh start. This isn't a fluke. I see this technique in trailer after trailer. It violates all the rules, but it works beautifully!!!!!! Go figure!]

Do we get to hear dialogue from the film yet? NO! Instead we see clips of Mildred with different men and a new title sweeps in..."THE INTIMATE AFFAIRS of a WOMAN...(new title)...who refused to live BY THE RULES--

Wow! Can you believe that! Even after the new start, they still wouldn't let us hear Mildred!!!!!! Man, they're witholding her until we're drooling with frustration! Finally, we get some dialogue (it's about time), but the dialogue is interrupted by another title: "She tried TO KISS OFF a crime!" 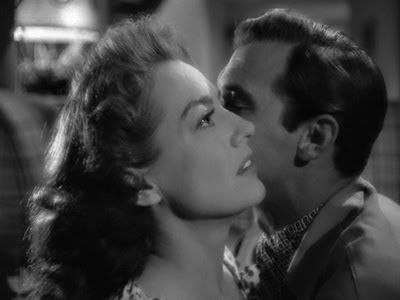 Huh? Crime? What crime? The shooting was a long time ago, back at the start of the trailer. This kiss-off-a-crime title appears between clips of romantic dialogue. The filmmaker deliberately doesn't sync the titles with what's happening on the screen. Once again, the rules are broken! But it works! Watch the film again and see if you don't agree!

Well, the trailer goes on, and there's lots more I could comment on, but I better end here. So, what have we learned? I learned that selling personality is everything, that an audience will tolerate more postponed satisfaction than I ever dreamed possible, that an audience actually wants to be tortured with denial of climaxes, that it's okay if a story stops and starts up again, that visuals don't have to sync with the dialogue, and that film making is a mischievous game that you play with an audience.

Posted by Eddie Fitzgerald at 3:06 PM

"you'll never be anything but a common---"

I guess they expected people to go see the movie to find out what name she got called.

"...the Hollywood wisdom was that a film has to be about somebody interesting... The plot is totally secondary."

Back then they built icons. They owned the icons. Nowadays nobody would so relentlessly hype an actor who is not under contract. Why would you --so you can pay him even more next time?

I love the old style of telling you about the movie with flying words over the visuals:

SHE COULD HAVE ANY MAN SHE WANTED...

...BUT ALL SHE WANTED WAS PIZZA!

Then the little snatches of dialogue:

"When a guy takes a girl out for pizza, don't you think he outta get a little something in return?"

"I don't know what HE should get, but YOU had better get OUT."

SHE WAS AN IRON GIRDER NO MAN COULD RIVET...

--UNTIL FATE WELDED THEM TOGETHER!

The book by James M. Cain (The Postman Always Rings Twice, Double Indemnity) is a great read. Though there's no trailer for te book.

The trailer for the movie has absolutely nothing to do with the actual plot, but the way that the trailer was done pulls the audience in.

From what I've read, Warner Bros. was trying really hard to get noticed by the Academy with this film, and they wanted to generate Oscar buzz for Joan Crawford. Tweaking with the trailer did the trick.

If the people who made the trailer would have made the trailer along the lines of what the story was really about (a hard-working mother who went to great lengths to please her ungrateful daughter), it would appeal to a smaller audience, and Mildred Pierce would have probably not got the audience and buzz that Warner wanted.

The people who made the trailer got it right. They played up Joan Crawford's reputation as a man-eating sex goddess, and tweaked the trailer accordingly. It generated buzz, and the buzz got Joan Crawford her Oscar.

Yes this is an excellent trailer and like all great trailers, a film in itself. Really the most effective way to generate hype is to leave the audience in the dark about the most important details. This trailer grabs you and dosen't let you go. Today's trailers don't do that. They think the only way to get someone's attention is by stupid quick cuts and loud, obnoxious, rock music playing in the background.

I love these trailers for the little world they create all their own, and for the fact that they so often use alternate takes.

Its such a shame that 99.9% of the time today trailers follow such a predictable, focus-grouped, scratch-tracked path that the audience completely tunes them out. Yes, many of the dramatic trailers of the 40s especially are way over the top today(and were then) and have been made fun of virtually since they were released, but they STILL have it way over our endless "In a world" versions. And the alternate "indie films' trailers are just as predictable and hackneyed in their own style. All cookie-cutter.

Kind of an aside, but I also find if fascinating that you found photographic still shots from MP that were used as direct reference for the european stone-litho, watercolor poster paintings.

In the US (imho) RKO had the most consistently beautiful poster art overall; in Belgium and France, ALL their poster art was done to that standard.

Jenny, I think Jaime Weinman agrees with you about RKO.

This is one of my favourite trailers of all time. When I cut a trailer, I'm gonna do it in this 40s style. Not copying the superficial aspects, but the underlying structure.

IDRC: Haw! IDRC, you have a knack for this type of dialogue.

Also, That was an interesting comment about the studios not hyping actors so much after the era passed when actors were all under contract.

Michael: Caine was a genius writer, no doubt about it.

Jennifer: Wow! That sounds right! I believe live action stories should retain the author's intention whenever possible, but publicity has to follow different rules...like it did here.

Interesting thought about Mommie Dearest. Something about that film rang false to me. Maybe it was the make-up, like you said. Could Crawford really have been such a witch?

Jenny: Were those trailers really considered over the top in that era? What you said implies that they were parodied or considered silly, but that people liked them anyway. I hope you're right, because that would make it easier to sell that kind of technique in our own era.

Interesting comment about RKO. Their noir posters were great!

Jorge: Were you kidding, or do you intend to get into film?

In a way, with the combination of mostly titles, pictures, and music, old trailers took a step back to the silents.

The most ubiquitous thing about about contemporary trailers, is the voice over, and the one guy who does them. Although that voice has been parodied countless times, its still used in trailers.

Eddie: I'm gearing up to write and direct an independent film.