A Short Story by Charles Dickens

If we all knew our own minds (in a more enlarged sense than the popular acceptation of that phrase), I suspect we should find our nurses responsible for most of the dark corners we are forced to go back to, against our wills.

The first diabolical character who intruded himself on my peaceful youth was a certain Captain Murderer. This wretch must have been an offshoot of the Blue Beard family, but I had no suspicion of the consanguinity in those times. His warning name would seem to have awakened no general prejudice against him, for he was admitted into the best society and possessed immense wealth. Captain Murderer's mission was matrimony, and the gratification of a cannibal appetite with tender brides. On his marriage morning, he always caused both sides of the way to church to be planted with curious flowers; and when his bride said, "Dear Captain Murderer, I never saw flowers like these before: what are they called?" he answered, "They are called Garnish for house-lamb," and laughed at his ferocious practical joke in a horrid manner, disquieting the minds of the noble bridal company, with a very sharp show of teeth, then displayed for the first time. He made love in a coach and six, and married in a coach and twelve, and all his horses were milk-white horses with one red spot on the back which he caused to be hidden by the harness. For, the spot would come there, though every horse was milk-white when Captain Murderer bought him. And the spot was young bride's blood. (To this terrific point I am indebted for my personal experience of a shudder and cold beads on the forehead.) 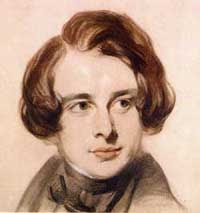 When Captain Murderer had made an end of feasting and revelry, and had dismissed the noble guests, and was alone with his wife on the day month after their marriage, it was his whimsical custom to produce a golden rolling-pin and a silver pie-board. Now, there was this special feature in the Captain's courtships, that he always asked if the young lady could make pie-crust; and if she couldn't by nature or education, she was taught. Well. When the bride saw Captain Murderer produce the golden rolling-pin and silver pie-board, she remembered this, and turned up her laced-silk sleeves to make a pie. The Captain brought out a silver pie-dish of immense capacity, and the Captain brought out flour and butter and eggs and all things needful, except the inside of the pie; of materials for the staple of the pie itself, the Captain brought out none. Then said the lovely bride, "Dear Captain Murderer, what pie is this to be?" He replied, "A meat pie." Then said the lovely bride, "Dear Captain Murderer, I see no meat." The Captain humorously retorted, "Look in the glass." She looked in the glass, but still she saw no meat, and then the Captain roared with laughter, and suddenly frowning and drawing his sword, bade her roll out the crust. So she rolled out the crust, dropping large tears upon it all the time because he was so cross, and when she had lined the dish with crust and had cut the crust all ready to fit the top, the Captain called out, "I see the meat in the glass!" And the bride looked up at the glass, just in time to see the Captain cutting her head off; and he chopped her in pieces, and peppered her, and salted her, and put her in the pie, and sent it to the baker's, and ate it all, and picked the bones.

Captain Murderer went on in this way, prospering exceedingly, until he came to choose a bride from two twin sisters, and at first didn't know which to choose. For, though one was fair and the other dark, they were both equally beautiful. But the fair twin loved him, and the dark twin hated him, so he chose the fair one. The dark twin would have prevented the marriage if she could, but she couldn't; however, on the night before it, much suspecting Captain Murderer, she stole out and climbed his garden wall, and looked in at his window through a chink in the shutter, and saw him having his teeth filed sharp. Next day she listened all day, and heard him make his joke about the house-lamb. And that day month, he had the paste rolled out, and cut the fair twin's head off, and chopped her in pieces, and peppered her, and salted her, and put her in the pie, and sent it to the baker's, and ate it all, and picked the bones. 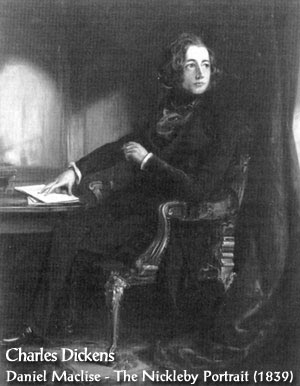 Now, the dark twin had had her suspicions much increased by the filing of the Captain's teeth, and again by the house-lamb joke. Putting all things together when he gave out that her sister was dead, she divined the truth, and determined to be revenged. So, she went up to Captain Murderer's house, and knocked at the knocker and pulled at the bell, and when the Captain came to the door, said: "Dear Captain Murderer, marry me next for I always loved you and was jealous of my sister." The Captain took it as a compliment, and made a polite answer, and the marriage was quickly arranged. On the night before it, the bride again climbed to his window, and again saw him having his teeth filed sharp. At this sight she laughed such a terrible laugh at the chink in the shutter, that the Captain's blood curdled, and he said: "I hope nothing has disagreed with me!" At that, she laughed again, a still more terrible laugh, and the shutter was opened and search made, but she was nimbly gone, and there was no one. Next day they went to church in a coach and twelve, and were married. And that day month, she rolled the pie-crust out, and Captain Murderer cut her head off, and chopped her in pieces, and peppered her, and salted her, and put her in the pie, and sent it to the baker's, and ate it all, and picked the bones.

But before she began to roll out the paste she had taken a deadly poison of a most awful character, distilled from toads' eyes and spiders' knees; and Captain Murderer had hardly picked her last bone, when he began to swell, and to turn blue, and to be all over spots, and to scream. And he went on swelling and turning bluer, and being more all over spots and screaming, until he reached from floor to ceiling and from wall to wall; and then, at one o'clock in the morning, he blew up with a loud explosion. At the sound of it, all the milk-white horses in the stables broke their halters and went mad, and then they galloped over everybody in Captain Murderer's house (beginning with the family blacksmith who had filed his teeth) until the whole were dead, and then they galloped away.

Posted by Eddie Fitzgerald at 11:20 PM

Wow!
What a terribly over the top and grisly tale with a Grand Guignol ending. And Tim Burton hasn't optioned this? If read just the right way, with the right pauses and intonations, this could be an excellent Halloween story to tell the young ones before they go to bed. A fun read, but certainly it must be even more fun to read aloud.

It's odd, you'd think the women would be deterred by a guy who calls himself 'Captain Murderer'. Kind of a red flag, isn't it?

I guess Captain Cannibal was taken.

I'm with Last, that narrative is one that begs to be read aloud. Too bad Vincent Price isn't around anymore. Guess we'll have to settle for Michael McKean who does a dead-on Price.

What inspired you to put this literary great up as a stand alone post, Eddie? Good call.

Man, what a story! I think the sickest most horrifying thing in the whole tale is how the dark skinned sister takes that poison and allows herself to be killed. That doesn't agree with me. Why doesn't she poison him beforehand, maybe put the poison in his food at the wedding? She wants things to take their course even though she gets her head copped off and doesn't get to see captain murder explode and stuff. It's sick. Thanks for putting that up, and now I don't have to read it.

On a side note I just covered my bedroom walls with my fabulous caricature collection. You may check it out if you like Title

I know you've written about how TV companies send their animation work to studios far away from the parent studio (including in my interview). So I came across a blog post from Joe Murray, who did Rocko for Nick, that have him talking about it.

I imagine you can relate to some of what he's said. I know John K. faced a similar dilemma when he had to subcontract Ren & Stimpy (Carbunkle and Rough Draft, if I recall).

Brubaker: I worked with Joe and can testify that he's a fun guy to work with. Thanks for the link!

Aaron: Holy Cow! You're going to sleep in a room with a zillion pictures of yourself on the wall!? I'd go nuts if I had to see myself every day, even if the drawings were as good as many of these were!

Trevor: I put it upo because its a great ultra-short story, and has one of the best ever titles.

Last: Burton SHOULD do this...maybe as a long short or featurette inside a compilation film.

Aaron, I think the intention is to be a bit over the top, rather than having every character make sense, so the twin can poison herself to poison him. Same goes for the title. Its like a story to spook children.

Dickens isn't always to be taken seriously, given the playful names he gives his characters, but he usually doesn't let it get in the way of Telling a Story, where the story passes as seriously as it can, even with Spontaneous Human Combustion. His stuff is great to study for breaking down plot points and story beats. Consider that much of his work was serialized, so it always has that "what's next' story element, in the longer work at least.

Eddie: Yeah, I know it's weird to have so many of my face all around, but I can sleep fine cuz I know they're just drawings, and since the subject is the same in each, my brain can easily remove it like with blue screen technology leaving me with only the artist that drew it.

Thanks for telling me a story over coffee this morning Eddie.
I'm off to buy a rolling pin.