I TELL THE STORY OF "DIE WALKURE" (AND PLUG ZUBIN MEHTA)


My retelling of Wagner's story was inspired by a the version on DVD by Zubin Mehta and the Valencia Community Orchestra. Trust me, this version is worth seeing and is reputed to be one of the best Walkuries recorded in the digital era. I saw it at Steve Worth's place last night and it bowled me over.

I needed examples to illustrate the story but I could find only one good clip of the Mehta version, and that was  a rehearsal. It's still well worth seeing, though. It's the last video on the bottom; don't miss it. Most of the excerpts here are by other artists. If you're hearing this music for the first time, then I envy you.


Anyway, here's the story. It's one of the greatest stories in all of opera, so I don't think it'll put anyone to sleep.

A good place to start is with the action described in the clip from the top of the post, the one where Siegmund and Sieglinde sing about their love for each other.  This is no wimpy, half-hearted crush...these guys have just met their kindred souls (each other), the one who they'll both fight to the death for. Sieglinde's already married to a brutal neanderthal (I'm taking liberty with the story in order to condense it) who's enslaved her. They run into the night to escape him.

The problem is that the gods have witnessed all this and have taken sides.  In order to prevent a civil war in Valhalla, Wotan orders Brunhilda and her Valkyries to kill Sigmund. This is a big deal because the Valkyries are the ultimate lethal weapon. No human army could stand up to them, let alone a solitary hero like Siegmund.

Brunnhilda finds the couple and prepares to kill them, but can't go through with it. Theirs is the purest example of love she's ever seen. She can't prevent the other Valkyries from helping the enraged husband to kill Siegmund, but she's determined to prevent harm from coming to Sieglinde. She begs the other Valkyries to help the mortal woman escape. If need be, she's willing to stand up to Wotan himself.

Wotan finds out and is outraged. Not even the Valkyries can help Brunnhilde now. He punishes her by making her mortal and putting her to sleep. The first human slob who finds her and wakes her up will take possession of her. She'll live in misery like a slave, will feel pain, and will grow old and die.

I forgot to say that Brunnhilda was Wotan's favorite child. They love each other fiercely. As sleep overcomes her, Brunnhilda begs Wotan for one last favor. Let a wall of intense fire surround her sleeping body. Make it so horrific that only the greatest of heroes could penetrate it. Wotan grants her wish then, grief-stricken, he exits. The lights slowly fade out on her inert body covered with a shield and surrounded by a ring of intense supernatural fire. Neat story, huh?  The events continue in the next opera in the cycle, "Siegfried." 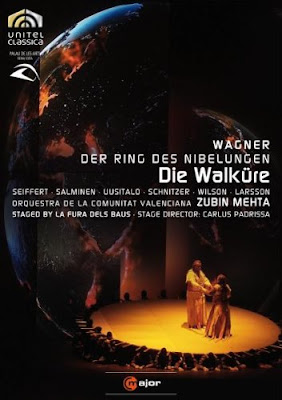 This Christmas, consider giving yourself a Christmas present...the Blue-Ray DVD of Mehta's "Die Walkure." It's $35 on Amazon. Netflix doesn't seem to have it. If you're hard up for dough, maybe you can pester your local library to buy a copy.  I recommend watching it on video, rather than listening to it on CD. The English subtitles are indispensable aids to understanding the story.
BTW, I wonder if this post will find itself on the radar of Wagner aficionados. Those people are brutal. They address each other with openers like, "Dear stupid" and "Dear Dumb Ass." Differences of opinion are treated like heresies.
Posted by Eddie Fitzgerald at 12:58 AM

All that and incest too!

Have you seen this, Eddie?

I've been listening to Solti's version these days, and so far the very best analysis of the Cycle has been Canadian Anna Russell's.

I forgot the other parts!:

Stephen, Jorge: Wow and Double Wow! Stephen Fry on Wagner! I'm double blessed. I had no idea he did this!

I have to clean the room the computer's in today so I'll listen to the links while I work, and get back to you about them tomorrow. Many thanks!

Jorge, Stephen: I'm having trouble finding the time to listen to the Fry links, but I haven't forgotten!

Check out Bernstein's "Tristan und Isolde" if you dare...

If only they'd filmed/taped this performance. There is no better.

Anon: Bernstein's Tristan? Hmmmm...maybe I can ask Steve to play it for me. I had fun reading the comments on the Amazon site. To date the best version I've heard was in the soundtrack to Bunuel's "L'age d'Or." I wish I knew where Bunuel got the bizarre drum piece that followed it. Anyway, thanks much for the tip!

Jorge, Stephen: I finally got around to watching the Stephen Fry-talks-about-Wagner videos. They were lots of fun! Thanks a million for the links!

I have Bernstein's Tristan. The orchestra is good, but I'm not a fan of Hildegarde Behrens

I like live Tristans better... Less apt to drag. I like Bohm and really like an odd live Kleiber I ordered by accident. Kleiber is an interesting conductor.

Steve: Thanks for the clip! I thought Behrens was great! You mean there's spmeone who does it better?

Anon: Aaargh! the price of the set is prohibitive right now, but I won't forget the recommendation. Steve found a 10 minute clip of Behrens Isolde which I thought was terrific but which he claims is missing something.

I listened to her singing Ho-yo-to from Walkure and found it very good but not great like Birgit's. That's okay, she found her niche in Tristan. Anyway, thanks for the recommendation!

Jorge: Thanks for the links but Russell is making fun of something that I take very seriously. I just can't see these stories in a humorous light.

I sort of know how you feel. Not with this, but I'm usually pretty unfazed when it comes to parodies of things I consider serious except for one thing: westerns.

I can't stand it when people satirize westerns.

What I like about Anna is how her voice, accent and entire personality is itself a parody of high class people... which then makes her punchlines about the pieces hit harder.