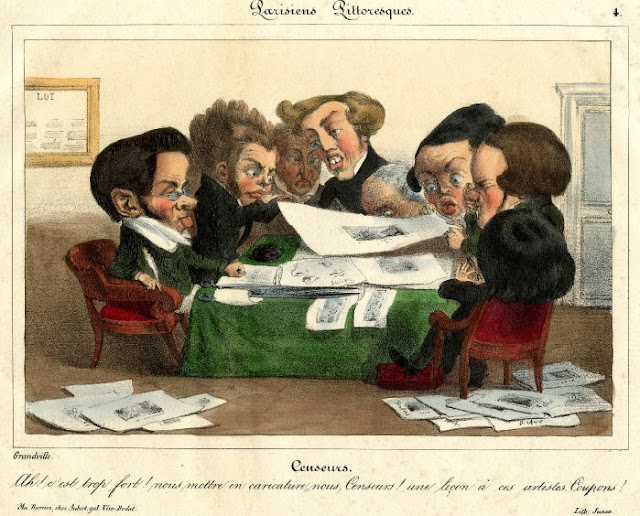 I'm ashamed to say that I don't know enough about 19th Century French history to comment on the exact political context of these prints. Evidently Napoleon III met a lot of resistance from republican artists,  and that worked its way into the cartoons of the time.

The print above derives from republican sympathies but it would be a mistake to think that republicans were united in support of the new trends in art. An awful lot of them, including some of the funniest caricaturists, were against them.  Caricature magazines roasted Courbet, Manet, and even Rodin. 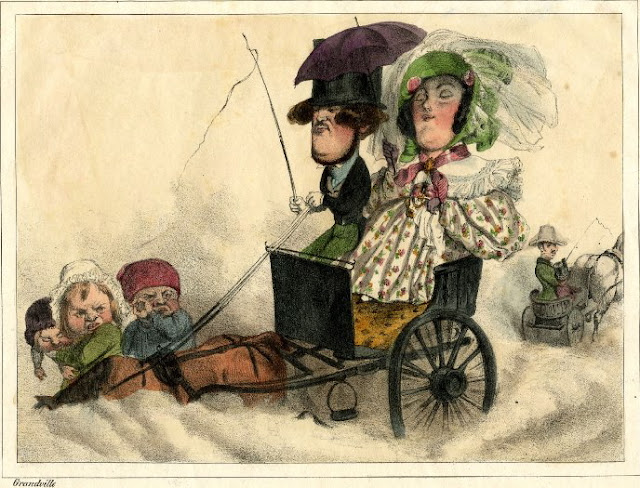 Lithography created a whole new market for cartoons like the one above. Most of the prints I've seen were relatively small. I guess that made them cheaper and easier to hide if need be. It's too bad because poster size reproductions would have been so much more appealing. 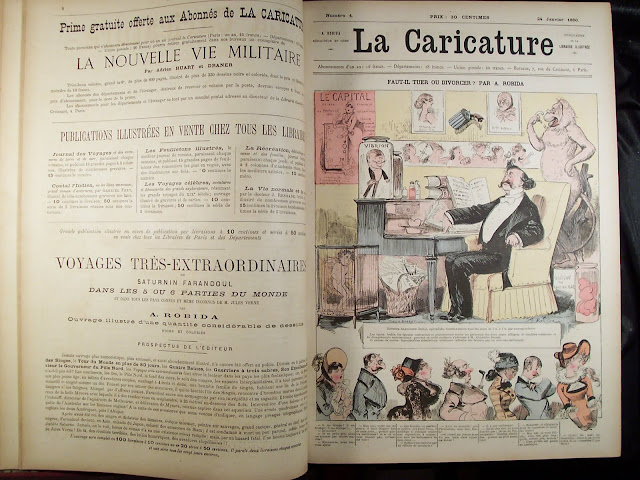 What's being sold here (above) is a lifestyle, a way of seeing the world. The anti-establishment reader is encouraged to imagine himself as artistically and culturally sophisticated and the defenders of the establishment are served up to him as boobs. It's argument by ridicule, which is not a very good way to get at the truth, but its appeal to artists and readers alike is irresistible. 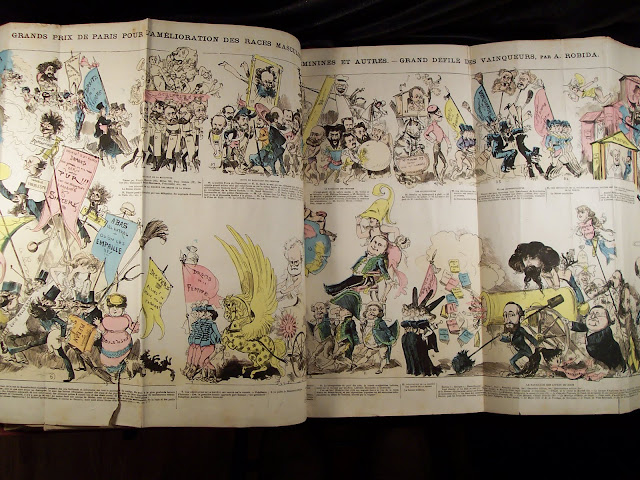 A commenter wondered if this was the era that pioneered caricature with big heads (above) and little bodies. Is it? Who's responsible for that?  BTW, click to enlarge. 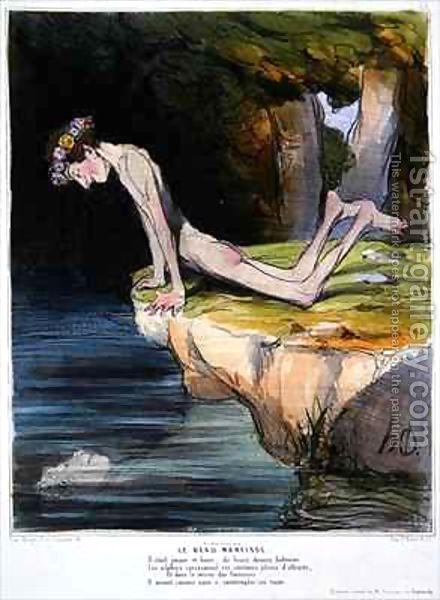 Here's a color lithograph by Daumier. Was a different stone used for each major color? It sounds expensive. Maybe silk screen or hand coloring would have been cheaper. I'm not sure. 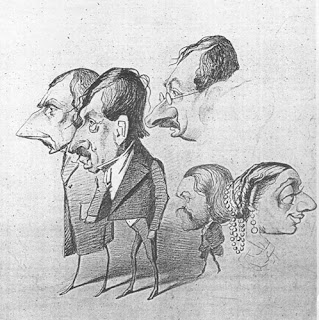 According to Alberto's comment, even Monet did caricatures (above) for the humor magazines. It looks like he was pretty good at it.
Posted by Eddie Fitzgerald at 11:17 PM

I actually did a post on 19th century caricature not too long ago. There were some fantastic ones, the most famous of them was Honoré Daumier who had some killer stuff, he also did caricatured sculptures. Louis-Léopold Boilly also did some great caricatures as well as masterpiece paintings. Another one I found on the way was Claude "Waterlily" Monet, as it turned out when he was young he made them to earn some extra money when his mother fell ill.
http://www.monetpainting.net/img_lightbox/caricature.jpg

and then of course there's this by Jean Verber!
http://www.univ-paris13.fr/CRIDAF/SFEVE/BlowUps/1901ImpudiqueAlb.jpg

can't wait to read more on your thoughts and comments on the subject!

I love Grandville! His illustrations were used on Queen's last album (and masterpiece) Innuendo.
http://eva.aws-it.at/english/spec_feat_innuendo.html

Love yer blog, Uncle Eddie. You touch on so many subjects dear to my heart.

Those are pretty unusual considering these are from the 19th century. It seems like most of the cartoons from that time that I've seen (mostly political cartoons) look like slight distortions on real life, and not really funny, IMO. These seem to go against the norm in some ways. What do you think?

The Daumier, last one, is gorgeous. I don't think I've seen it in color before.

Are these done by french cartoonists?

Very interesting! I've never seen any of these before. I'd like to know who the artists were. I'm not surprised to hear, from a commenter, that the last one is a Daumier, but I wouldn't have known it on my own.

Makes me wonder when the convention of caricatures with large heads and small bodies started.

Ironically, it was probably around the time of The Enlightenment.

And Isn't this pretty much the time when what we know as caricatures began?
Before the 18th c. weren't they known as grotesques?

"I'm ashamed to say that I don't know enough about 19th Century French history to comment on the exact political context of these prints."

I love you Eddie! You are the only person I know who would say something like this, and mean it. And I know several actual historians! All I know about that period is that it was (I think) a republic at least twice and a monarchy at least twice -- a real mess, in other words. Thanks a lot, Napoleon!

I love these!! I love the 19th century caricaturists!! I can only hope that I can be a great a draftsman as them.