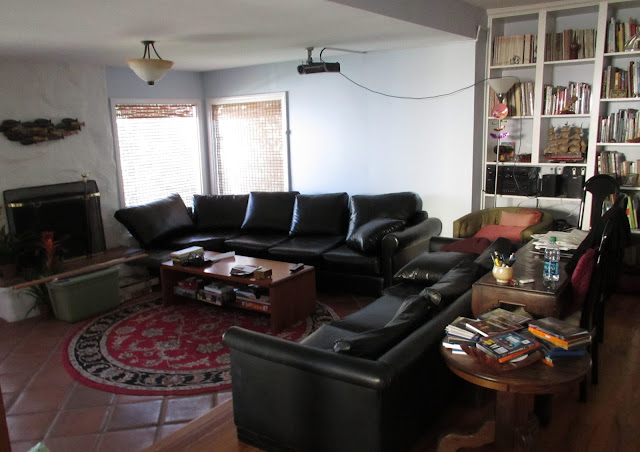 Today I did some voice recording at a friend's house (above).  While I was there I couldn't help noticing how nice the living room was. It's so leathery! So manly! I also like the tile floor and circular rug. 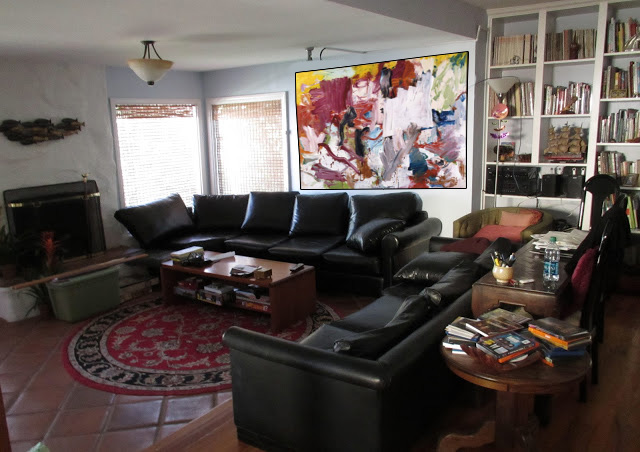 All it needs is a big de Kooning on the wall, which I Photoshopped in (above). What do you think?

The picture shows what might be a TV on the extreme left. I hope it is because that's a perfect spot for it considering that there appears to be a thin dining table behind the couch on the extreme right. That would allow the owner, who's a bachelor, to eat a meal while watching TV. There's a nice table outside under an arbor for more formal dining. 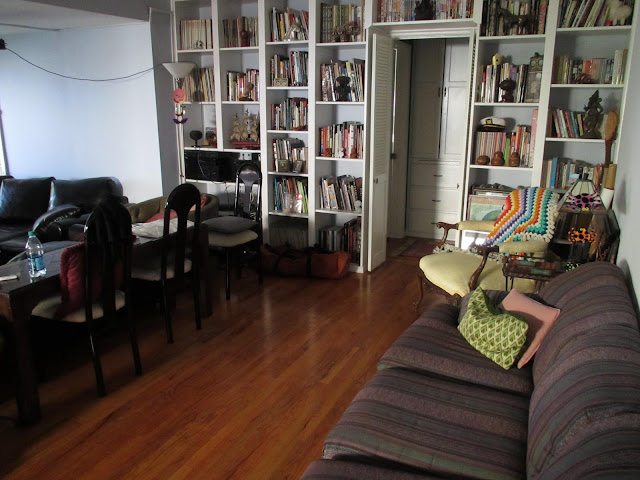 Here's a better shot (above, left) of the slim dining table I talked about. Check out the built-in bookshelves and the varnished wooden floor. Very nice! Very manly! 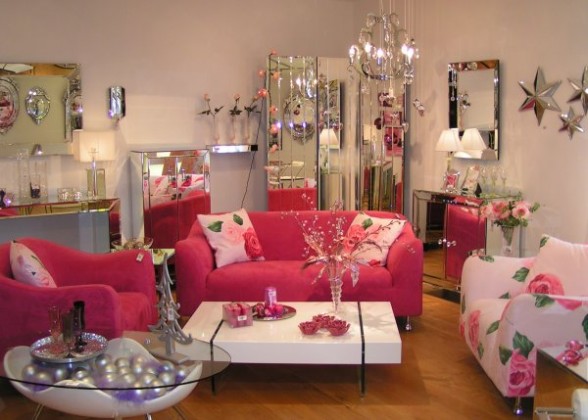 For contrast here's (above) a girly living room. Yuck! What's wrong with women? Why do they like stuff like this? 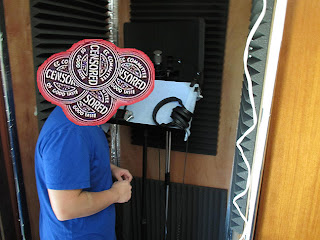 A few words about the recording session: it went well for the most part but I felt sorry for [name]. Every time I goofed he patiently acted out the scene again, and each time I proceeded to make the same mistakes I did before. Geez, my voice has a mind of its own, and it's a real jerk!

It's as if my brain was thinking, "I'm going to do a good job for my buddy, and give him exactly what he wants," but my voice was thinking, "Who does he think he is? He's only the director, whereas I...I am the ACKTOOR!" Anyway, it turned out mostly okay by the end. 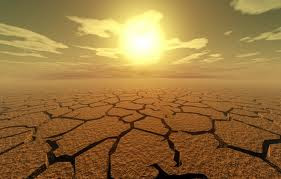 On another subject....my blog is in trouble. My hits have diminished by half since the beginning of December. I can't figure out why. Is it the content? I don't know.  Maybe everybody got iphones for Christmas and my site doesn't load quickly on that device. Maybe Theory Corner just doesn't look good on a small screen. Maybe everybody's bailed to Facebook where readers can post their own pictures. I hope that's not it, because I like Blogger better. Maybe I just suck. Who knows?

Anyway, if the downward trend continues I'll have to reduce the number of posts to two a week, which is still a more frequent rate than you get on most blogs. Whatever happens, I won't do anything right away. I'll see what happens in the next few weeks.

Posted by Eddie Fitzgerald at 11:35 PM

I'm still with you Eddie. I think there are just too many sites and too little free time to peruse them. If I read all of the things I'm interested in I would never leave the house. My advice would be to hang in there with the blog and possibly test the waters of facebook or some such thing where like minded art folk hang out.

I don't post, but i read this blog almost everyday. No matter what happens, I want you to know that you do a great job and run a very entertaining and insightful blog!

Acetate, Nodnar: Thanks for the cheery comments. I'm not on facebook but the impression I get from seeing it at friend's houses is that it's not as supportive of idea-oriented material as blogger, but maybe I'm wrong. I like the fact that readers can post there own pictures to it.

Before I do anything drastic I'll try to post lower res pictures, and maybe slim down the sidebars a bit so the site loads faster.

Joshua Marchant (Scrawnycartoons) said...
This comment has been removed by the author.
3:42 AM

I too am an avid Theory Corner reader, Eddie, and look forward to reading your posts every day.

Unfortunately, Blogger's prevalence does seem to be waning a bit these days, in favor of simpler feed-based networking that requires less commitment on the reader's part and more instant gratification. Like you said, Eddie, it's a real shame because sites like Blogger and Wordpress offer a much better platform for the expression of concise thoughts and ideas than sites like Twitter, Tumblr or Facebook.

Maybe starting an account on one of these sites and using them to link to your juicier blogger posts would help get your stuff more exposure, especially Tumblr or Twitter since they're more publicly accessible.

Your blog is one of my favorite places on the internet. You will never lose my readership, Dear Eddie!

I don't post either, but I always check on this site. Please don't stop yet!

Eddie, do you have any thoughts on the new Ren & Stimpy book? I know my friend Thad interviews a lot of people for it, were you interviewed?

Btw, Eddie, I think the decrease is just a marked decrease in use of Blogger on the whole. In fact, all web site use not on social networking sites is down. I still read every post, but I hardly comment on any blogs anymore.

I used to read and comment on dozens of blogs. Now I only ever read your's and don't comment on any. Your content still kicks ass! I'll try to comment more often from now on. Love your stuff, always have.

It was a fun surprise to find out that Mike Pataki did the voice of a barber in King of the Hill.

The character he plays is pretty similar to Liquor, you can't help but smile when he starts reading the lines.

It seems very unlikely that John will have gotten a fair treatment in Thad's book, but I should read it before I comment on it. I wasn't interviewed for it.

Joshua, Mattie: Thanks for the advice! You're right about not putting too much emphasis on hits. The problem is, I'm a ham and I need an audience of a certain size to spur me on.

Also, I believe in Blogger. They gave me a lot of free services and I feel I owe them some loyalty. Maybe I'll take Mattie's advice and use Facebook to channel some readers to Blogger.