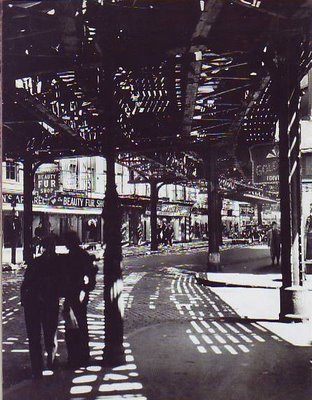 It's a picture of the Bowery "EL", Second and Third Street Lines. You'll have to click to enlarge it, it probably won't look like much if it's seen small. The picture below is a detail of the one above. 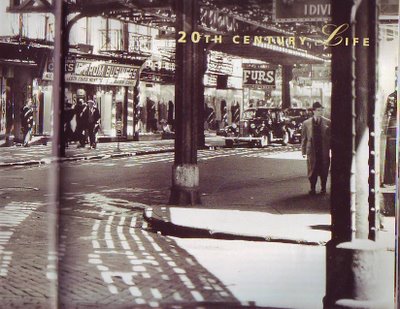 This together with a couple of the New York City ferry pictures by Cecil Bell (already posted, in the archive) are my favorite pictures of that city. Philadelphia used to have el trains complete with stations and tracks that look just like the ones on New York, and I used to look forward to riding them. The elevated stations were designed to resemble German railroad stations of the 19th century. Maybe Frank Furness, the famous Philadelphia architect and champion of railroad architecture designed some of these.

Furness believed in designing ordinary residences and business buildings to look like old railroad stations and modernists widely criticized him for it. I can't imagine why. German railroad stations are one of the most pleasing structures ever built by man and it makes no sense to confine their use to only one purpose.

I love the film noir slatted shadows cast on the street by the tracks and steel above. How often do you come across architecture that distinguishes itself by the fascinating shadows it casts? Walking up the steps and through the corridors of these elevated wood and steel cathedrals was a real treat and I for one miss it.
Posted by Eddie Fitzgerald at 11:55 PM

Hi Uncle Eddie! I too just love the type of street architecture as shown in the Bernice Abbott picture that you posted, so much so that I have collected a lot of books of photographs of these kinds of street scenes. There was an issue of Life magazine in 1937 that had some photos of this subject, and one of those photos was quite similar to the one you have shown. That photo in Life was evidently copied quite exactly as a background in one scene in the Freleng Warner cartoon, Clean Pastures. (Come to think of it, that photo must have been published somewhere earlier, because Clean Pastures was released in May, 1937. But in any case, the background looks like an exact copy.)

There used to be a standing New York street backlot in Culver City at MGM that owed a lot to the look of this picture, except it couldn't quite capture the mood. That section of backlot has long since been bulldozed for condo construction.

Eddie, those shadows on the street look like morse code or computer analog code from the 70's!

Jenny Lerew said...
This comment has been removed by a blog administrator.
10:28 AM

Those are really lovely. I never rode el trains when I lived in Philly--I wonder if they were still there in 1981? I suppose we here in Los Angeles never had them in any way, did we? They're a design of the 19th century--for bigger metropolises?

L.A.history aside:
I did get to wander amongst the similar fake el track at the Fox lot, though(I was there to interview for kid parts)--it was only a few dozen feet of track, done for "Hello Dolly" I think--or maybe earlier, but it was so romantic and neat.
That section actually wasn't the part that became condos--it burned down in a fire. The [now] condo section is much to the lower western/back part of the lot, where the old huge water tank used to be, which served as lakes, sea, etc. The old el area is an extended studio parking lot now.

The Market Street Elevated and The Frankford Ave. Elevated are still in operation in Philadelphia. They operate in areas not likely to be visited by tourists, as they are outside of the historic center of the city. Both lines operate underground in the center of the city.

Beautiful! My wife and I have similar images (mostly postcards) plastered all over our apartment.
I really want to know what that guy by the pillar is up to. Film noir has conditioned me to think he is plotting something. Perhaps even murder?
On another note, I thought you might enjoy this comic strip from 1923.

Those are really great photos, Uncle Eddie! They do have a moody, film noir feeling to them, don't they?

Where do you get your photo collections? You always have some interesting photos for your posts.

You're talking about the Fox el train standing set or the one at MGM? Both studios had tanks.

Ape: Wow! Thanks for the great link!

Jennifer: I got tht picture from a library book, an anthology of American art. I'm lucky because I live within walking distance of my local library.

Milt: Interesting. Maybe I can look it up. 37 sounds like a good year for that magazine.

Photos like the one you've posted are my soul reason for wishing there were time travel.
I want to know what the fur district smelled like on an early winters day.

Hey anonymous!--I hastily answered your post before I realized you'd said "MGM"; yes, I was talking about the Fox loi--their el is gone now...I never ever made it to the MGM lot, damn it. Of course they'd have had an el too.