WHY I DON"T KEEP A DIARY 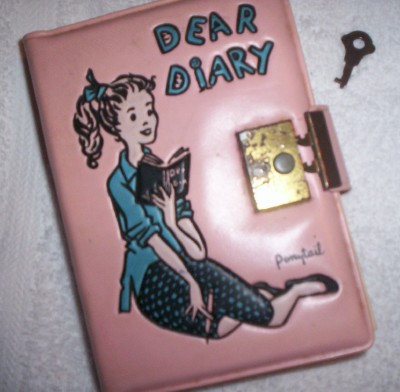 I mentioned this subject briefly before but here's the longer, more fleshed out story: a long time ago, when I first came to LA, I decided to keep a diary. I had to buy a girl-colored diary (not the one above; I wouldn't have gotten something that over-the-top) because I couldn't find any masculine ones. The key wasn't much protection against intruders and I promptly lost it but while it lasted it was better than nothing. I put all my secret thoughts into it. I kept it in a locked file cabinet and I never took it out of the house.

One day I was in a really philosophical mood. The ideas were first-rate and they were coming fast and furious! These were too good to write on napkins; I decided to grab my diary and run to a restaurant where I could write in seclusion. On the way to the parking lot I passed the apartment complex jerk and (most likely) drug dealer. I hated the guy and he hated me so we gave each other the usual icy stare and I got in the car and drove away. So far, so good.

About half way to the restaurant I suddenly realized that I'd left the diary on top of the car when I got in and had driven away while it was still up there! In a panic I checked the roof of the car then turned around and traced my path back home, carefully scoping out the street. I didn't see anything but I didn't really expect to. The diary most likely would have fallen into my parking space. When I got to the parking space there was nothing there but the drug guy, grinning like the Cheshire Cat. I asked him if he'd seen a book on the ground and he nodded "No" in a way that tantalizingly could have meant "Yes." Later that night I heard uproarious laughter comming from the drug guy's apartment. My guess was it was the drug guy and his biker friends reading my diary.

So what does it all come to? My worst enemy reads my girl-colored diary. Not only that but the diary was full of incredibly sappy, whining passages like, "I'm so good and the world is so bad. Why doesn't the world recognize my goodness?" It's like something Little Lord Fauntlyroy would have written to express his anguish over finding a hair on his lace cuff. Well, I never wrote or even thought anything as wimpy and self-pitying again so I guess I got something out of the experience. Most of all what I learned was..... NEVER KEEP A DIARY!
Posted by Eddie Fitzgerald at 10:44 PM

What if your diary contained masculine things instead of sissy stuff? That jerk probably wouldn't have been laughing, and probably would've handed it back if it talked about getting a bear in an arm bar or something.

The moral of the story should of been-

Diaries are for homos.

Hey Eddie - Have you ever considered that your local drug dealer couldn't read? He might have never known what you put in your diary.

ALWAYS call the cops on the drug guy in the building. And NEVER let him know it was you. (Goes back to rolling a hippy stick)

Hey, maybe they were so high that the curtains were funny to them. Maybe they didn't even look at or think about your diary.

"Diaries are for homos. "

When I was in 3rd grade one of my sister's classmates paid me to tell him what was in her dairy, she was so mad, and I was really ashamed... That was one of the worst things I ever did. :(

I got a whipping for it, and I think I deserved more than what I got.

I never kept a diary because my mother was (and still is) the nosiest person on this planet. (I still love her, though, because she does have other nice qualities)

She tried to get me to keep a diary by giving me one for my birthday. Instead of writing my innermost thoughts, I wrote Spanish words and sentences to practice my vocab. I could tell that one day my mom was trying to read my diary because of where the book was placed in my desk. My brother and I had a laugh trying to picture her reaction.

Hahahaha! I prefer to doodle them into a sketchbook. The times when I've been busted for this I've always managed to persuade the viewer that the drawings were ambiguous by nature and that any interpretation was entirely subjective. Ha!

For years I have resisted keeping a journal (diary is such a sissy word)because I always had that suspicion in the back of my head that there isn't a thought, there isn't an idea, there isn't a single ill chosen word that can't be used against me some day.(turns out I was right--but I won't elaborate)

I think this is unfair. Being an artist, I think I should at least be granted some license against hurt feelings, should my comments or statements (which were not meant for their eyes anyway)somehow surface outside of my knowledge.Through experience, I have discovered, however, that it doesn't take much to offend some people (welcome to the internet-you would think that the prospect of the free distribution of ideas would cause people to develope thicker skins not thinner ones, but it appears that this is not the case) for this reason alone, I have never ever kept a journal. That isn't to say I haven't had episodes where I've gone on verbal tyrades and poured my wrath onto the page with the intensity of an old man writing an angry letter to to the local newspaper, and occasionally I may have used my power of art to create something that is not in the best taste, but again, as an artist ,I feel an obligation, -no- a sacred duty to cross the line whenever possible.Later, when I have calmed down, I'll reread my rant with the perspective of a casual observer, but my own personal paranoia has always caused me to destroy the evidence, should it ever fall into the wrong hands (and it always does, trust me on that one--I'm just a man whoose intentions are good, oh lord, please don't let me be misunderstood)looking back, I should have just kept the diary, books are fairly easy to destroy, however, any old thought you may have had rolling around in your head while teaching yourself how to type will survive in some file for years.(you know, there are some moments in life where the word "Whoops" should be an acceptable answer.)

I never understood the reason people kept diaries. If you dont want people to know things about you, why would you document them in a fruity little book that people know contains little bits of juicy gossip?

From what Jorge said too..I think every boy stumbles upon their sisters diary and uses it against them for years.

aren't our blogs the techno version of sissy books?

We'll probably get our asses kicked by real men soon.

"aren't our blogs the techno version of sissy books?"

Girls like touchy feely cartoonists like Eddie, and John. So now all the "real" men will not only beat you up for having sissy online diaries, but for taking their girls away!

Eddie, this would make a hilarious cartoon. (As would most of you stories) The Sensitive Diarist endures years of abuse from the Apartment Complex Jerk. Finally, S.D. finds a new outlet for his philosophical musings on the internet. Now the Son of A.C.J. finds his stuff on his Blackberry (Drug dealing pays well) So now SD is abused by two generations of ACJs - It's a laff riot!

HA HA HA HA!!! How awful! I'm almost jealous though...in all my younger years of keeping a diary, no one ever tried to read it or steal it. Most of the entries were lies anyhow (dear diary...guess what? I have 18 boyfriends), or just sort of depressing (dear diary, no one would play on the teeter totter with me so I did it alone). Hee hee!

Sometimes, amongst the great creative ideas I would jot down, I would sometimes jot down something personal I shouldn't, if depressed or lost in the wilderness enough. Such as a list of all the women I may have had the sliightest bit of interest in in the past decade or so. Then I would forget about such stuff. Oh sometimes the occasional dream diary too, which might or might not be as embarrasing. But it gets all mashed up in the great creative idea mishmash.

I'm fairly certain that a girl that used to help me clean the apartment may have found the list during one particularly vigourous spring cleaning, but she was a good friend, I didn't care. She may or may not have been on the list. Many of her friends were. It may or may not have helped me in romantic quests.

When I moved away, I realized how much I missed the house cleaning friend, and that she may have missed me in a way beyond friendship. But she married someone else. The End.

In grade school, everytime I drew something slightly racy for a joke, this fellow who particularly had it in for me for some reason, would grab the tasteless cartoon, and go tattle. Most teachers didn't really care one way or another, but one teacher that needed to get a life, was a bit too concerned, a bit morally uptight guidence counselor, got a couple of such gags every other year or so, from the snitch. The only embarrasing thing there was, I was in deep crush with his daughter.

Turns out, she was a lesbian. the end.

That's a funny story Eddie! John, blogs are public, so you're probably not going to write the kind of sappy crap you might put in a diary.

Some ideas in these journals may be embarassing, stupid and completely wrong but...so what. Some of these ideas may also be really great.