HOW GUYS SHOULD DRESS FOR A DATE 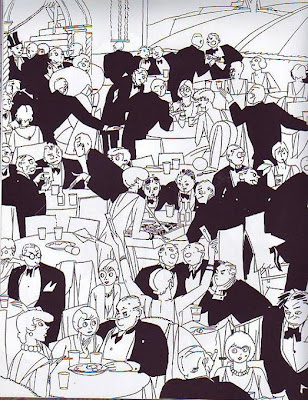 I was thumbing through the recent book on MacPhearson when I stumbled on these two cartoons. I must have stared at them for 15 minutes before I finally figured out what was so interesting about them...the people in these pictures are dressed perfectly for the occassion they're in! 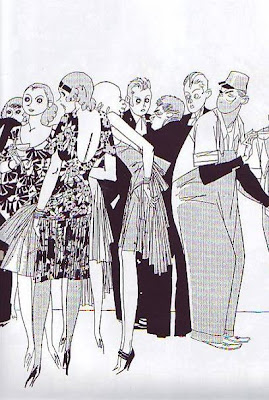 The guys are wearing tuxes, which is a nice way to go if you can afford it, but that's not the most interesting thing. The really interesting thing is that they're all wearing black and white. When two black-suited men talk to each other they merge into a new black sillouette which incorporates them both. When a third or a fourth join them they form another shape still. A bunch of men alone still form a pattern: dalmation spots against a sea of white. As long as every man wears black the dark shapes keep changing all night like a kaliedescope.
Another reason a guy should wear black is that it sets off the girl he's with. If the girl wears light colors or flower patterns then black makes a perfect contrast (I can't believe how gay this sounds!). You would think that guys would lose their individuality by becomming a background for the women they're with. Oddly enough that isn't true. Black is background but it's also agressively foreground. Black and white looks good on a guy, they're's no denying it.
Posted by Eddie Fitzgerald at 12:54 AM

Is this what comic strip artists call "spotting the blacks?"

I'm with you. All guys should dress like the Blues Brothers & MIB!

You're absolutly right Eddie. Its all about the ladies standing out in formal situations. Look at all those red carpet, pre oscar shows.. they never say anything about what the guys are wearing. Could you imagine every man wearing differnt colors and styles of suits! It would look like a circus.

I'll bet Jack Kirby was influenced by the masterful spotting of blacks in the examples you cite here.

Correction: I got the artist's name wrong. MacPhearson was a pin-up artist, not a cartoonist. The name I should have said was Russell Patterson.

I read Bill Watterson say that cartoonists don't use black space enough, and therefore miss alot of dramatic possibilities that way. (He also said that the eye, being lazy, is drawn toward white)

I'll stick with the leather jacket.

The only problem with this scenario is that most women insist on wearing black also. Therefore everything blends into a big, black cloud.

these are great drawings. the top especially in the use of b&w contrast and the such. thanks for sharing.

Hey, I'm way late in getting to this post, but I put up some of Patterson's not-so-famous work at this here Flickr set.

Now that I have the Fantagraphics book, the stuff seems weak, but it's still fun to look at...