THE STEPS OF WELLESLEY COLLGE 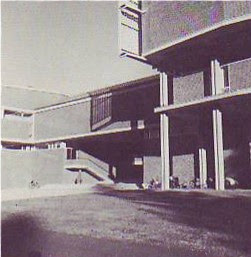 The building above is pretty lackluster but I'll forgive it because it contains a killer tunnel and staircase. You can see the entrance to it in this picture. It doesn't look like anything yet but keep walking. 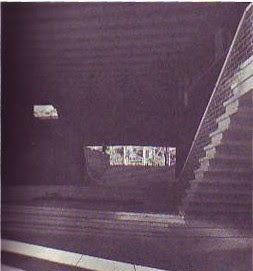 The little staircase on the side acts as a pivot which orients you forward. There's a tantalizing glimpse of something at the end of the tunnel.

You walk toward the light, smelling the tunnel and feeling the broad, horizontal sweep of it. The image at the end gets more and more interesting. Like a stripper it only gradually reveals itself.

The steps don't rise evenly. Everytime you hit an especially interesting view the architect prolongs it by flattening the steps. 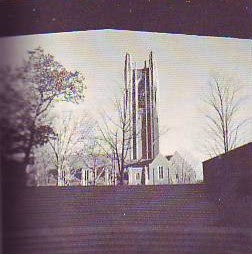 You climb the steps and the churchtower is dramatically revealed. 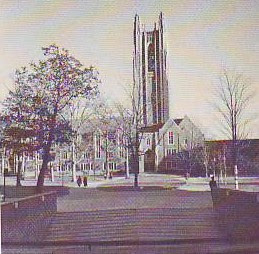 The reveal was so exciting that the full view almost comes off as an anti-climax. Neat, huh?

Posted by Eddie Fitzgerald at 9:17 PM

Isn't that a women's college? What are you doin' there? Har har har!

I think I know what Uncle Eddie was doing at a women's college...naughty boy! ]:)

Great post. Wellesley is well known for its architecture as well as being one of the "seven sisters". The movie Mona Lisa Smile was filmed on the Wellesley campus, and it took advantage of the architecture.

I went to school at Hellesley.
Trust me, it isn't all that exciting in person.

There's a tunnel between Disney's 1940 Animation Building and the old Ink and Paint Building in Burbank. All you'll find there today are shrews and skeletons of people who were once having sex.

What do you think of today's "modern" school construction? Specifically the spate of corrugated steel crates being erected all over L.A.? I think they're cold and heartless. I think a place of learning should feel solid and old. Stone, brick, etc.

Andrew: L.A. public school buildings are kind of drab aren't they? They could be worse, though. The positive thing about them is that the classrooms are so interesting once you're actually in them and have the door closed. I guess that's because so many teachers make an effort to decorate creatively. One of these days I'll do a blog about the cool art projects you often see on grade school walls.

That's a neat entrance. Where is Wellesley located?

Jeff: (Gulp!) I was hoping no one would notice that I didn't know.

Good point! I remember looking forward to the holidays as a school boy. That's when the teachers bring out the big guns! (Not literally, of course.)

This same effect occurs when you walk out of the Westminster Underground station. The reveal is that somehow the mammoth Big Ben is standing right before you across the street and you never see it coming. It was my first upclose viewing of Big Ben and I was so blown away that I let out a string of expletives as massive as the tower. It was one of the coolest things ever and it all happened because of the design of the staircase.

Jay: Wow! I can't wait to try the Westminster steps! Thanks for writing that!

I loved the steps too!- but every time i walked up or down, I had visions of doom where I cracked my head open falling down them.