LEARNING HOW TO STAND IN LINE 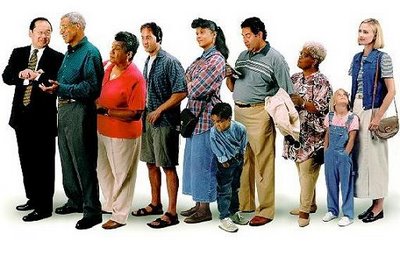 Amazingly, you have to learn how to stand in line. It's not an innate behavior, you have pick it up by watching other people. I discovered this while in a line leading to a teller's window in my local bank. I was waiting there with about five people infront of me when a lady came in and stood beside me, not behind me. It made me feel uncomfortable but I tried to ignore her and read my magazine. After a couple of minutes a guy comes in and stands behind the lady instead of me. Another guy comes in and does the same thing. Now there's a whole line behind the lady. By the time I get to the teller's window the lady's line is the real line and I'm just a street urchin standing beside her. How do things like that happen? 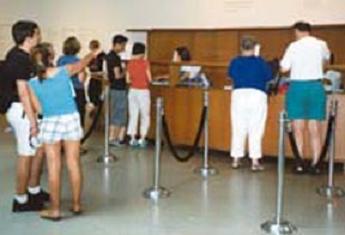 Now take a look at the picture above. Notice that two people hang back leaving a large space between themselves and the people at the counter. That's OK, they're probably not ready to talk to the counter yet. Nothing wrong with that, that's fine, but I've been in fast food restaurants where the line starts this far back and the people in line get indignant if you walk up to the counter and try to order. What's with that?

My guess is that that men who don't know how to form a proper line are the same men who leave paper hand towels in urinals. You know who you are!

Posted by Eddie Fitzgerald at 11:21 PM

Well done Eddie for upholding queuing as a social skill.
There surely are uncertain situations that can be difficult to read at a glimpse as that one that you describe where the queue starts far back, but that's no excuse for leaving paper hand towels in the urinals.

To me, if someone leaves that much of a gap in a fast food place, the counter is fair game. I needs me some transfats... or whatever they call them now.

At all-you-can-eat buffets, shouldn't there be a rule about which way the line goes through the food stations? I mean, I go for some fried rice and here comes some yokel the wrong way, reaching for the spoon at the same time.

You're right - some people don't know how to queue. However, others do. If they are not sure where the line ends, they will often ask "is this where the line ends?" or "are you in line?" (this question gets asked to people who are not quite standing in line) It's the sensible thing to do to make sure that you don't commit an ettiquete faux pas.

I have a different take about the lady who stood beside you. Maybe she was subtly flirting with you. If she was standing behind you, you would not be able to see her. By standing beside you, you can see her.

The weirdest line story I got:

I was in a video store one day, and there’s no line, so I come forward to rent my movie.
The teller points to the back of the store saying “Sorry, she was here first!” a lady starts making her way back. I said “Once she’s out of the line it ceases to be a line!”
“No, She was in THE STORE before you were” “Ok, but make it quick” then it appears she has no membership… and started singing up!

Parents, here's how to move faster: Tell your small children to play around and bump into people at the front, go pick them up, apologize and then stay there.

I went to the post office one day to mail a semi large package. There was no customers there and no one at the counter. I walked up to the counter and started to fill out the address on the package. Then I heard this lady yell from their break room," Ya'll need some help?"
Needless to say, I didnt yell at the top of my lungs, "yes, I need some help" .. I guess I figured that it was just a given fact that people up at the counter need help. Instead I just shook my head while still filling out the information on the package and mumbled to my self, "yeah eventually.."

So this woman waddles out of her little room still chewing what appeared to be some greasy chicken. She seems pissed that I didnt respond to her in the way she responded to me, that I made her get off her ass and come see what was going on.

She tells me that i cannot fill out the information on my package right there at the counter and that I had to go use another counter behind me. I look behind me at the other counter. Still, no one is in the Post Office.

I give her a dirty look and proceed to the "appropriate" counter. A woman walks in while im finishing up preparing my package, and walks up to the counter and does her business. I get in line behind her. The Post Office lady then barks and points at me, "Uhhm yeah, you need to stand behind that line."

Apparently, there was a line about 8 inches behind me that I needed to be behind in order for things to run smoothly.

I eventually got to mail my package but I left the post office sooo pissed off. That experience ruined half my day.
Im sure that line nazi lady still continues to terrorize and abuse her powers to this day.

You expect us to believe that one, Edward? What're you trying to feed us?

Eddie, the last line gave me an idea, I'd like to hear a post about male washroom etiquette, especially urinal etiquette, things every guys should inately know but there's always a few maroons who don't get it. Holy CRAP that sentence was way too long.

Max Ward said...
This comment has been removed by a blog administrator.
2:07 PM

Speaking of bathroom etiquette, where I work I have to do a bit of janitorial duties which means cleaning the bathrooms a bit at the top of the hour(I work in a movie theater by the way). The women's room is always much messier than the men's room. Any theories why?

Do you think it is because women put up on an act infront of men that they are tidy? But they know the only place where they can get away with murder and not have men find out is in the women's bathroom.

One of my friends once pointed out that Canadians (me included), don't know how to stand in line. Once she pointed it out, I then realized that we don't form lines to tellers and checkouts, we just form groups. You have to create a mental catalog of who was there before you, and who was there after you... but most of the time, people are nice and they say, "Oh! You were here first, go ahead!"

Shawn Dickinson said...
This comment has been removed by a blog administrator.
10:59 PM