HOW TO IMPROVE YOUR PAINTING OVERNIGHT 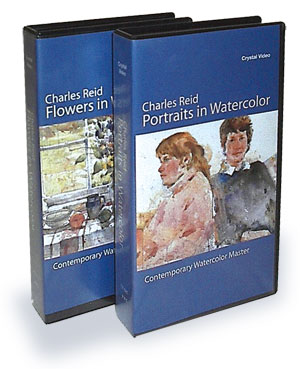 I just watched Charles Reid's "Portraits in Watercolor" video and I have to say that I was impressed. Reid's technique is interesting but it's his mannerisms that really caught my eye. He seems to be a very nervous painter. The jerky, too-quick way he mixes his paints on the pallete, the way he brings the pallette up to his face, the way he almost seems to talk to the canvas under his breath all give the impression of an obsessed, crazed artist.

I don't mean to imply that I think Reid is crazy. He's not. But I admire him for taking on the attributes of a crazy person when doing so forces him into a greater intimacy with his picture. . Painters should curse at their pictures. They should engage in an angry, energetic and exhausting fight with their canvases. There's plenty of time to relax later when it's clear that the picture's going to work. The time of heightened risk, when success or failure hangs in the balance, should be supremely stressfull. Patton was right when he said the soldier who can loose and laugh wasn't much of a soldier. You should be so keyed up when drawing or painting that a dropped pencil or a ringing telephone would make you jump to the ceiling. Art is a serious business!
Posted by Eddie Fitzgerald at 1:58 AM

I recognise that frantic feeling. I'm actually scared of starting back into big involved ambitious paintings at the moment in case they suck me in and I never come out again.

I shall look out for those vids... I'm totally getting back into watercolour. I've never had anything against instructional materials like that, except that often the painters are uninspiring. It sounds like this chap might be up my alley.

Aggie said...
This comment has been removed by a blog administrator.
12:17 PM

That's cool! You have a lot of art-related discussions, and that's great, but will you ever express your theories on music? :)

Nice post! It was easy to envision the artist you were talking about. You are great with words

I'm dying to see this after your amazing reenactment!

I never can figure out when I see artists listening to music on their headphones, or talking to their pals while they are drawing a scene. It means the scene is not going to look very involved or interesting. Why would the audience want to see something that the artist wasn't intensely concentrating on?

People stand in my doorway and stare at me when I draw and I don't see them- or try not to. I'm amazed that they actually want to interrupt me.

Every cel opaqued at Hanna-Barbera when they were still doing it on their premises was painted by people wearing headphones, blasting themselves numb with FM radio music. Nobody ever accused any of them of making art.

I swear at my art all the time. If it ever swears back I will seek help.

I swear at my art all the time. If it ever swears back I will seek help.