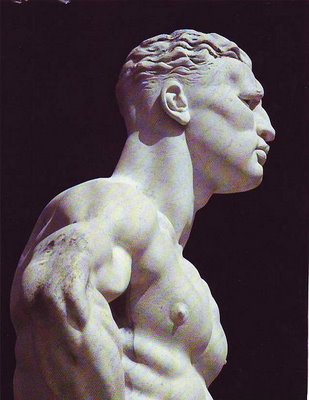 These statues were commissioned by Mussolini to decorate The Mussolini Forum, which was to house the 1944 Olympics before WWII intervened. As decorative sculpture they're not bad; as art...well, what do you think? Me, I'd say no. The technique is highly professional rather than artful and there's no transcendant quality in them. 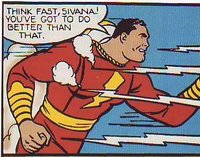 The statue above (topmost) put me off when I first saw it because it seemed to be glorifying a bully or a thug. I think I was wrong because beefy guys like that have been universally admired since the 30s. Even Captain Marvel (above) used to look that way. If you look close you can see some sensitivity and intelligence in the statute's eyes. 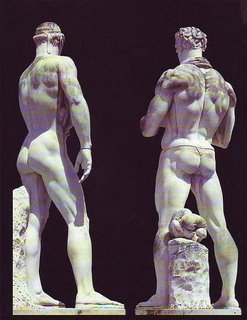 These are physiques (above) that I associate with Nautilus machines. I used to think exercizes that emphasize specific muscles were a modern invention but you see figures like this in Rubens and other old masters so I guess I was wrong. The guy on the right looks like he had a killer bowel movement. 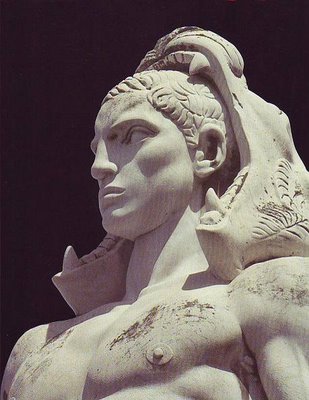 I like this kind of manly sculpture (above) but the hair looks like it was turned out without much thought. Zaidenberg (the 40s how-to-draw author) used to draw deco hair like that using charcoal to make quick, chisel strokes. Ruskin in "Seven Lamps of Architecture" warned against schlocking what appears to be unimportant details like the hairline. I think he was right.
Posted by Eddie Fitzgerald at 9:18 PM

Interesting theory about glorifying bullies, that’s fascism in a nutshell.

I never thought of Captain Marvel as thug looking, but he does have a very prominent jaw and forehead, and a smaller cranium.

I love the +4 dexderity Lion Helm.

Women would hop on your junk if you had one of those.

I still think it romanticizes bullying. The early DC superheroes are pretty fascistic - visions of perfect manliness bestowed fantastic powers and with them, the right - no, the duty to beat moral absolutes into inferior lifeforms.

Then in the 1950s, the target audience shifted as evidenced by Spiderman, which is essentially one big nerd fantasy.

I bought a set of nipples exactly like the guy in the bottom picture... They're working out pretty good. They look like a wide-brimmed sombrero for a smurf.

Mussolini, in his mind, was larger than life. He had big ideas that he thought would be earth shattering. In some cases they did.

When the Olympics where going to be held in Rome in 1944. Mussolini decided he would have a majestic arena built that would let the world know that the Italians were not a weak race of people.

Mussolini boasted that the new stadium, called Stadio del Marmi, would be grander than the Coliseum. He wanted the features of the statues to be very virile looking.

Manly men. Men that could eat metal and crap out nails. When the other countries arrived for the Olympics, home of the original Olympics, he wanted the world to know that the Italians were a world power. He wanted let them know that they were solid, strong, and could take on anything you put in there path.

Not saying that all Italians agreed with the views of Mussolini and his regime, but, I think he made his point clear. " Mess with us, We'll stomp you flat."

If you think about it, how would a Olympic arena look with beer belly statues or one with stick figured nerdy guy with bad posture. That would be a good cartoon in itself. If the world had different views on natural beauty.

I'm an idiot. I can't even get my history right. Athens,Greece is the home of the Olympics. Rome is the home of the world power. Sorry, folks. The hammer to my head theropy isn't working. the side effects causes blurred vision, bouts of brain farts and idiotic ramblings. As if you couldn't tell.

In my Italian home town Trieste there is a fantastic pair of sculptures each standing at one side of the entrance of the building now occupied by Bank of America.

One is a man, the other is a woman.
The difference? Very little.

Maybe the model for the female was Mussolini's wife that was notoriously ugly.

Columbia Pictures head Harry Cohn was so impressed after visiting Mussolini in his intimidating office that he had his own Hollywood office designed to look just like it, to better intimidate the people visiting him. On the upside, he's dead now.

The title of the top one is, "Are You looking At My Girlfriend?"

I know John's in NYC right now, but you need to let him know his blog seems to be breaking up. You can't access the archive from his site, and if you Google them by month February and March 2006 seem to be gone. Those of us who were using it as a resource will be at a loss if it's gone - I wanted to look at his early caricature postings again. Someone should tell him to make sure his pages are saved in case of gremlins.

Here is an intellectual observation to those sculptures....

After some detective work, I've solved the problem of John's missing archives. When you click on the month, the address cuts the 'a' off 'archive'. Type it in and the page loads just fine. Now we can all enjoy John's amazing caricatures and all of his year's worth of insight.

Steve: Thanks for figuring that out!

Jennifer: Boy, the dreaded "E" word. Those statues must have really left you cold!

>The early DC superheroes are pretty fascistic - visions of perfect manliness bestowed fantastic powers and with them, the right - no, the duty to beat moral absolutes into inferior lifeforms.

That's the whole point of Superhero, is to simplify things for kids into black and white. You have your whole life as a teenager and an adult to sift through moral grey areas. As a kid you watn to see your big strong dad beat up the bad guys!

Or at least kids used to. Now comics are full of moral doubt and are only for brooding college age nerds.

I don't see anything wrong with art having such a simplistic world view, either. I like these statues.

I'd like these stautues better if they were of naked girls.

Uncle Eddie, I'm not sure what you mean about the hairline on the last statue. Can you do a drawing to show what you mean?

>That's the whole point of Superhero, is to simplify things for kids into black and white. You have your whole life as a teenager and an adult to sift through moral grey areas.

However, if WWII was any indication, most people don't!

Anonymous: I think I'll retract what I said about the hair. If you put too much detail in the hair it might detract from the face. Given the deco style of the piece maybe the hair is fine the way it is.

Ok, but as long as kids understand that superhero comics aren't a realistic way to base your morals on, they'll be OK.

>I think I'll retract what I said about the hair. If you put too much detail in the hair it might detract from the face. Given the deco style of the piece maybe the hair is fine the way it is.

Actually, I agree with what you said before. It's not realistic hair and that clashes with the face and body. I would have preferred a simple yet realistic haircut. People's hairstyles don't really have valleys like that, it looks like a bad hat.

i think they are pretty appealing regardless of what type of archetype they are portraying. for what they are they work. I think finely toned physiques in both males and females used to be highly regarded in previous eras. It's not like that anymore though.

What is the sculptor's name?