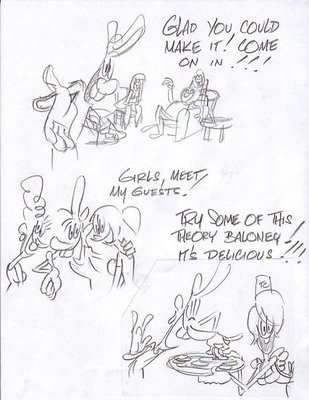 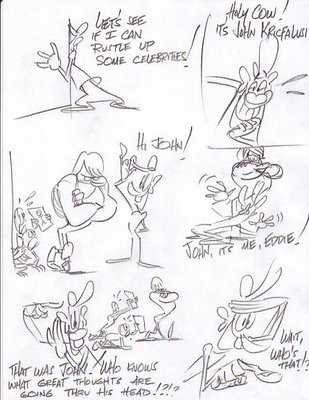 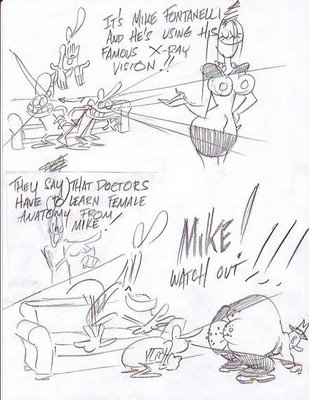 Gee, I guess that's the end of the party. I gotta get Mike to a doctor. If you don't have a ride home just sack out on the sofa! See ya!
Posted by Eddie Fitzgerald at 11:49 PM

By the way, the maid with the Theory Baloney isn't Katie. I just accidentally put Katie's hair on her.

I fell out of chair laughing, and then shit my pants when I hit the floor.

I'm going to clean up now.

Eddie! You are the perfect cartoonist! I miss you! I'm so happy when you post drawings.

By the way, Even if that's not me, I'd be honored to one day be maid at the theory mansion, serving bologna to you and your guests!

Next party - no men allowed!

BTW, since you revealed the secret of my X-ray vision to the world - I guess I can reveal YOUR secret.

Eddie is my hero.

Be careful with that baloney. Sharks can smell it from a mile away!

John wouldn't even look at my drawings!

Hey, Eddie - Great party! The theory baloney tastes really good with theory cheese! Then Mike called me a "skoodge" or some kind of Brooklynese, just because I wanted a theory ice cube in my theory coke!

That guy bending over.

Was he picking up a hot dog..?

*uhhh* People not so loud,I gotta hang over. By the way, dose anybody know if I came there with pants ?

pcunfunny, you came in queefy's pants, just before he shit them. What, Eddie, no cheese sandwiches?

Uncle Eddie those drawings are great! More "theories" with your sketches.

Thanks for the party update.

Oh wow, these are great...wow, thank you so much.

Are those kids trying to get John to critique their drawings or get him to look at their ideas?

These are great Eddie! Id love to see more of your work!

man i really like this one a LOT, in fact it's my favorite comic youve done for your blog so far!

Uncle Eddie, your drawings are great! They crack me up.

They quench my brain thirst.

These are so funny Eddie! I love the way you draw men! Mike has x-ray vision???? (Gulp) ew!

Can I be a maid too, along with Katie?

Kali, Katie, Everybody: Thanks for the kind words. I love Kali's "(Gulp)EW!" remark. What a devastating put-down!

I only know the sweet, innocent, side of Mike!

haha- I like your far-fetched interpretation of me Eddie- but I have seemed to have disappeared from the party.

How in the world do you get your doodles to be painfully dynamic?!? You absolutely "own" dynamics.

I wish I could draw hands as good as you!

Max: All that I'm consciously aware of is that when I draw fast I try never to erase. I just draw over the bad drawing.

Eddie is a good host. He thought of everything. Down to the bologna on crackers. William Fisher's Bologna? It does have a nice bouquet to it. Made late march with a hint of MSG. Very palatable.

Nice touch on the beer can fountain punch bowl. Laying newspapers down was a good idea to keep the floors clean. Oh, Sorry about the plant in the corner of the living area near the door.

I brought my portfolio, but, the line was so long to talk to John. I just decided to start showing everyone in line. Made some new friends.

It's lucky Mike is strong willed, anything like that happening to a normal man, would have killed him.

Thanks, Eddie had a great time.

The ONE thing that stands out (for me) in these sketches is the magnificent "HAND" positions....almost 90% of the expression is coming from those hands!! I love it!
Eddie, Is John really that much of a Hard-Ass? or are you just bustin' balls?

Pat: Hard-Ass? No, not at all. He's an extremely likable and generous guy. I just drew him that way because that's the traditional way that geniuses are drawn. I think it started with Beethoven who's always portrayed as serious and brooding even though you can tell from pieces like the 6th Symphony that he was very warm and sensitive.

i have to comment on this twice just because it is so fun and full of cartoon goodness. thanks again for posting this eddie! even in your small sketches i can see a bunch of cartoon fundamentals underneath. Like Katie said, when i think of the "perfect" or "ideal" cartoonist, I think of Eddie Fitzgerald.

>Hard-Ass? No, not at all. He's an extremely likable and generous guy.

I like-a your lettering