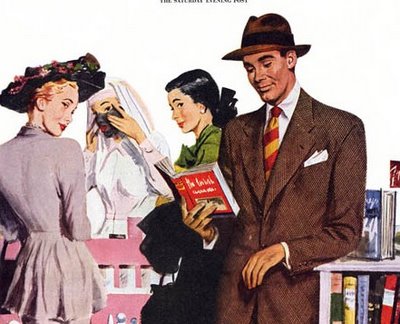 From extensive studies we know what kind of man reads Theory Corner. For starters he's young, well-dressed, popular with the ladies and has a killer music and book collection. Women have been overheard to say that he's often mysterious and elusive with a kind of Dean Martin cool. "Like James Dean but hotter!" said one woman!

THEORY CORNER men are adept at urban survival. They know how to use an extendo-fork to obtain a tasty and nutritious meal on the cheap. They're up on the hot films like Lugosi's "Raven" and Lorre's "Stranger on the Third Floor" 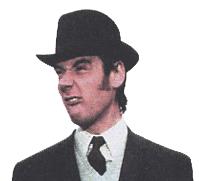 and they cultivate a fearsome look of disdain for cartoon fans who like the wrong cartoons. THEORY CORNER men even smell good! 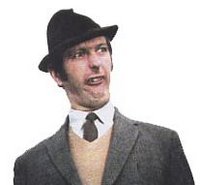 Other blogs will attempt to lead you to believe that they will give you that real He-man aroma. This is not so. In fact, THEORY CORNER positively reeks with He-man odors! At least that's what women tell us!
Posted by Eddie Fitzgerald at 12:23 AM

Jeepers Creepers, Uncle Eddie! That's me, to a "T", too!
Except for the he-man aroma. I bathe regularly.

And much love for Monty Python! Just seeing pictures of that bunch makes me glee.

Cant argue with you there!

I learned everything I know about cultivating my irresistable man-stink by reading Theory Corner - thank you, Uncle Eddie!

That is why I am proud to call myself a Theory Corner kind of man.

Thanks to your revolutionary Theory Corner Lifestyle, I can now proudly sit around my house all day in my maroon smoking jacket spinning my collection of Spike Jones LPs on the Hi-Fi while eating bacon sandwiches with baked beans. I eagerly await the next Theory Corner issue with the Olive Oyl centerfold!

I was a 90 lbs weakling with no charisma and no future. Bullies would kick sand in my face every day (even when I was miles away from any beach).

But then I discover the Theory Corner and my life changed forever. Now I'm the one who kicks sand in other people's faces. (I carry it around with me in my pockets The Great Escape-style).

Thank you, Theory Corner!! B)

you got me pegged right there!

Where did you get that picture of me?

I heartily concur with Eddie's sentiments profiling readers of his stellar blog. Most other blog readers walk sideways and smell of bleach.

I hate to echo Jorge, but yes, that was my question: Forget the men--what are the women like?

I think you could swap the nomenclature and just apply it to the wimmenfolk, myself, but here goes:

"What kind of female reads the Theory Corner? Surveys taken (and a random sampling of adjacent male sweat glands) tell us she's ALL-GIRL; allergic to any kind of artifice, a snappy dresser and fond of stillettos, Keds and her number one choice, bare feet with Jungle Red polish expertly applied to dew-claws. Speaking of red, redheads predominate Theory Corner 4 to 1, with natural blondes a close second. She often sports pouty lips and has a weakness for whoopee cushions and Copic markers. She doesn't ask that her men make huge amounts of money, only that they leave her the hell alone when she spends hers--usually on paint and other people. She is multi-talented, can play the mandolin and the bongos at the same time. Brilliant taste in decor. Loves teeth."

Uncle Eddie you are a riot! I love reading your articles because they help me clear my head so I can solve some tricky problems.

Why aren't any publishers asking you to write articles and short stories for their publications? I can definitely picture your articles in The New Yorker.

Better yet, why hasn't Blogger chosen your blog yet as a "blog of choice". I have to question some of their latest choices...your blog is better than some of their "blogs of note".

>"What kind of female reads the Theory Corner? Surveys taken (and a random sampling of adjacent male sweat glands) tell us she's ALL-GIRL; allergic to any kind of artifice, a snappy dresser and fond of stillettos, Keds and her number one choice, bare feet with Jungle Red polish expertly applied to dew-claws. Speaking of red, redheads predominate Theory Corner 4 to 1, with natural blondes a close second. She often sports pouty lips and has a weakness for whoopee cushions and Copic markers. She doesn't ask that her men make huge amounts of money, only that they leave her the hell alone when she spends hers--usually on paint and other people. She is multi-talented, can play the mandolin and the bongos at the same time. Brilliant taste in decor. Loves teeth."

HAHAHAHA! But you forgot that they float.

They float? If this blog had been around in the late 1960's, Ted Kennedy would be president today.

They float? If this blog had been around in the late 1960's, Ted Kennedy would be president today.

Nobody knows like Ted Kennedy that
cold water can chap a dick quick.

Oh yes. That's me..young, handsome, snappily dressed and charming! Unfortunately not such a hit with the ladies...that's because I live in a crappy small town where all the girls obviously don't have taste. Not for long!

I wonder if you might give me the honor of viewing an animation that I made last week, trying to incorporate all of the values you guys have been instilling on me for the past number of months. I'd appreciate any comments you might offer!

I must say, Uncle Eddie has truly mastered the look of utter and complete disdain.

Well, I can't say Theory Corner improved my life a whole lot because I was already a rip-roaring he-man type from a family of he-men and circus acrobats.

And even before I started reading this blog, it generally took me ten times longer to walk anywhere than my friends from all the beautiful ladies swooning at my feet, necessitating my carefully picking a route through their panting, heaving bodies.

Not to mention all the times John Wayne, Lee Marvin and Marlon Brando came to me for advice, forcing me to berate them scornfully for sobbing pathetically.

And then there's my cultured side... the artiste.

So it's no wonder I found Theory Corner. It was inevitable.

So! Ever since I've been reading Uncle Eddie's Theory Corner, I've had more sexy WOMEN than I can possibly handle!!!

I don't come here to sniff young men's balls. Crack open a window or something.

Jenny: Holy Cow! "What Kind of Woman..." is masterfully written!!! I wish I could write like that! Do you mind if I use it in on the blog?

Jennifer: Thanks much! I love what you said about things you read helping you to tackle problems. That's a marvelous compliment!

I guess i am not a theory corner man. I dress cheap, ladies say they love me but secretly hate me, and although i do have a killer music collection, i am lacking in the book area. My mom says i look like james dean but that is my mother so it doesn't count. And for purposes of networking and surviving i pretend to be accepting of all types of cartoon lovers and animation people so as to avoid conflict.

I guess i'll have to work on it some more. hahahahah

That's me all the way. I have a great collection of Rat Pack, Bobby Darin and Louis Prima CD's, I wear a black leather jacket and I don't have a book collection but I do have a hell of a nice DVD collection! I have ALL the Ren & Stimpy DVD's, Beavis & Butthead DVD's and a hole lot of crap that I love! This Blog of yours is definitly for me! Keep up the good work.

In order to be a Theory Chair Man, one must spell incorrectly at least five times a day.

Eddie: of course, you silly! I would adore to be quoted. ; )
-And I say "silly" because you already dowrite that way, all the time. Clever!

Eddie! You really have me down pat! (packed?) Seriously. Just about everything you listed describes me. Except maybe the Dean Martin thing. Bt i'm totally mysterious and pleasantly-scented.

You're a bad cat man yes you are!

Jenny! you are exactly right about the theory corner women!!!!!!!!! how'd you do that

Heh--I was thinking of guess which women, Marlo? They're all prominently featured on your blog.
I think you could write it better--you should! Isn't it time you took another turn in the Theory Chair? Eddie---toss her on the settee!